Sehwag and Harbhajan are eager to find their way back into the Indian team.

Tired with the poor performances of India abroad, the selection panel headed by Sandeep Patil has decided to come up with a new system to strengthen Indian team by keeping a second set of playing XI. Instead of naming it as India A or Prime Minister’s XI, they have named it as Bench Strength XI.

“We were tired of selecting players who get bounced out or just can’t deliver abroad. And most of the time, the deserving players hardly get any opportunity. So, players in the Bench Strength XI will be ready for any challenges and if necessary, out of form players will be dropped from the main side,” Patil said.

Though Patil confirmed that the decision was structured on England’s Performance squad, many players in the Indian dressing room said that it was Amit Mishra who had suggested the idea to Patil and he accepted it. Mishra has been on two tours to South Africa and New Zealand without ever playing for the team. If rumours are to be believed, Mishra is all likely to captain the team with more experience than Ajinkya Rahane in warming the bench.

“Yes I have been carrying the drinks for a while now, it’s time I thought we should utilise our talent. Hence I proposed the idea to launch another team,” Mishra said while carrying a bottle of juice to Ishant Sharma in the nets.

Patil is reported to have contacted Manoj Tiwary and Subramaniam Badrinath to form the core team and stitch a new bench strength side. Wriddhiman Saha was an automatic choice for the role of wicketkeeper.

Though Patil has ruled out presence of seniors, Virender Sehwag and Harbhajan Singh are eager to find their way back into the Indian team by playing for the Bench Strength XI.

In trend of dismal bowling performances, even Mishra refused to disclose the possible players in the pace department. “I’m still not sure which pacers will be there in the side in the run-up to the World Cup,” he said after MS Dhoni had stated the same about his own playing XI.

Last heard, the selectors are dealing with another stumbling block in setting up the team. After news spread that there will be a Bench Strength XI to ‘empower’ deserving players, Rahul Gandhi has been rigid about renaming it as Rajiv Gandhi Cricket Vikas Yojna in the quest for ‘empowering’ cricketers. 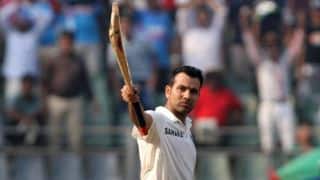