Despite having conditions to spin oppositions out, especially those not used to it, the spin unit has not created much impact for India A.

Indian reserve spinners playing for India A have not had the impact against tourists expected to succumb to their guile. Their counterparts from Australia, on the other hand, have shown what they have been missing. Is the age-old spin threat ceasing to be India’s trump card at home? Abhishek Mukherjee has more.

With veteran spinners asked to shoulder important responsibilities of spin in the three Tests in Sri Lanka, the decision smelled of helplessness to find new pin-up options capable of the international job. The selectors’ reluctance to consider risky investment seems vindicated with the failure of these rising spin stars to make any lasting impact for their A-team assignments in the two unofficial Tests against Australia A and the three finished matches in the ongoing triangular series involving South Africa A. The results notwithstanding, the spinners, at times, have not been able to spin the ball on slow turners at Chepauk, leaving other members of the side to make up for the gaping hole.

Therefore, in typical conditions sure to unsettle cricketing tourists from Oceania and The West, of furnace-like weather and slow tracks meant to irritate the batsmen used to pace and bounce, the hosts have been beaten convincingly. The South Africans have arrived later, and are hence struggling with the conditions (and generous helpings of butter chicken). Quinton de Kock flew in a day before his team’s first match against India A to get his form back in examinations away from international scrutiny. Without being fussed, he worked the spinners around and smashed boundaries to score a century. READ: Butter chicken, pizza too much for South African cricketers’ tummies

In the hosts’ first match against India A, Usman Khawaja and Joe Burns, the two openers, carted fast and slow bowlers all around the park to help their team score a mammoth 334 for 4 in their 50 overs. Alarmingly, 13 of Burns’ 14 sixes in his 154 came off spinners: six against leg-spinner Karn Sharma, the one-Test player; four against off-spinner Parvez Rasool; and three against left-arm spinner Akshar Patel, who was a part of in India’s successful World Cup campaign earlier this year.

The coach Rahul Dravid conceded his spinners needed to improve. What did they need to do differently? “Naturally, I guess the three spinners that we’ve got are spinners who bowl a little bit flatter through the air, quicker through the air. That’s not going to change overnight. But I think we could have bowled better lines, maybe,” he told ESPNCricinfo.

Australia A left-arm spinner Ashton Agar, playing his first match in the tri-series, coolly collected five wickets to spell India A’s defeat for the second time in two matches. What he said while collecting his Man of the Match award was interesting: “I think you have to be a little bit faster on this wicket. Patel and I bowled the side spinners and we tried to quicken up.”

The important ingredients are guile and turn, which have been provided in sufficient quantities by the slow bowlers of Australia on tour. Steve O’Keefe, the off-spinner, took six wickets in the first innings of the opening ‘Test’ of their tour and four more in the hosts’ second innings in the following game to contribute to a series win. Agar, playing only the second game, took three wickets in a combined bowling performance that had India A all out for 135. His five-wicket haul in the List A fixture was built on sharp turn the track had been offering. Leg-spinner Adam Zampa, in the other fixture, had done the same to get four wickets. READ: Ashton Agar credits simple bowling plans, adaptation to wicket for win over India A

On Monday against Australia A, Karn Sharma provided more loop in his deliveries and kept the line tight. His rewards: three wickets, two of which were classical leg-spinners’ wickets. Opener Travis Head, batting confidently on 45, stepped down the track, was beaten in flight, and was bowled with the ball turning in sharply. No. 6 Matthew Wade was sucked into the drive by the drift of a flight delivery, and was bowled as it dipped and went through his attempted shot to disturb the stumps.

Karn will have one more opportunity in the tournament to stick his imprint in the upcoming group game against South Africa A, who have struggled in India with bouts of food-poisoning . But regardless of whether his peers as a unit help take their team to the final, their endeavour should likely be considered mediocre, more so because Australia A have shown them what their likes are capable of. 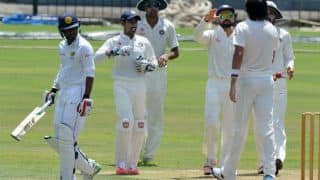 India vs Sri Lanka 2015: Learning experience for both sides