Kolkata have started their bid for a third Indian T20 League title on a solid ground with two consecutive victories. In the season opener they edge past Hyderabad in a last-over thriller before beating Punjab for a convincing win in a high-scoring clash. In both their victories, allrounder Andre Russell has been the central character who has been in blistering form. Against Punjab, Russell did the damage with the bat and the ball as well.

On the backdrop of the double-threat that Kolkata brings with them, Delhi will be eyeing to down the high-flying Kolkata at their den. Unlike their latest opponents, Delhi have had a mixed start so far a crushing win over Mumbai in their opening game and then outclassed by Chennai in their next. Pitch has been the subject of focus at Kotla every time and such was the case against Chennai too where the surface didn’t allow for easy stroke-making. Recent history tells us it’s not batting friendly with slow bowlers making impact.

Chennai clash also saw the spinners dominating and the track became visibly difficult to bat on in the later stage of the match. However, things can change since BCCI has withdrawn its curators from Delhi, Mumbai and Chennai following differences with the local curators. Will we see a more runs or will the state of affair continue?

Early indicators suggest that Delhi are reliant on the big-hitting Rishabh Pant. Other batsmen around him have to step up to give him some breathing space. Also, while opener Shikhar Dhawan has scored a half-century, it has come at a slow clip – a fact also pointed out by coach Ricky Ponting as well.

What: Match 10, Delhi vs Kolkata

Weather: Mostly sunny with a maximum of 36 degrees Celsius

Depending on the surface Delhi could make a change or two. Allrounder Chris Morris, one of their top performers of the last season, is available for selection and could replace Keemo Paul. The hosts played three overseas players against Chennai but could bring in Sandeep Lamichhane in place of Amit Mishra. Packing their side with spinners could be an option to counter Russell who has had a better record against pacers.

Dinesh Karthik has relied on the same Playing XI for the first two matches. He has the attack that can easily exploit the slow conditions at Feroz Shah Kotla. Kolkata and will be happy to not disturb the winning combination. 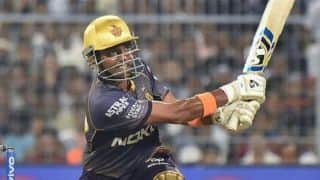