Sourav Ganguly picked two spinners and opted to bat despite the gloom. The rest is history.

Sourav Ganguly had started his reign well, with Test wins in Bangladesh, Zimbabwe, and West Indies, and stopping the Australian juggernaut, albeit at home. Unfortunately, India had lost the West Indies series, which meant India’s reputation for doing poorly overseas had not warded off. And then in England, India lost at Lord’s and had to battle for a draw at Trent Bridge.

Things did not look too bright at Headingley — both figuratively and literally; the gloomy Leeds sky almost had that ideal-for-swing-bowling stamp written on it. But Ganguly backed his strengths and picked both Anil Kumble and Harbhajan Singh, and since he did that, he opted to bat.

The decision faced some criticism when Virender Sehwag’s scratchy outing ended in a second-slip catch, but that was it. The untiring Matthew Hoggard and a redoubtable Andy Caddick kept on coming at the Indian batsmen, making even the semi-new ball fly around. Nasser Hussain deployed five, even six fielders for the snick, but to no avail. Sanjay Bangar played the greatest innings of his international career, a dogged five-hour 68, but even that paled in comparison with Rahul Dravid‘s 148.

Dravid batted for over seven hours, carrying the battle till the second morning. Such was the quality of the innings that he would be named Player of the Match despite being outscored by Sachin Tendulkar (193). Having already scored 46, 63, 13, and 115,he now stamped his authority on the series. He would round things off with 217 at The Oval — a haul of 602 runs at 100.33.

Tendulkar took control after Dravid departed, and India batted on in the gloom of the evening, knowing fully well that the tiring English bowlers were desperate to come off. Ganguly came to the party as well: his 128 took only 167 balls. He smashed three trademark sixes off Ashley Giles, one of which left a spectator with a bloodied head. India declared on 628 for 8 on the third morning.

Ganguly enforced the follow-on with a 335-run lead early on the fourth morning. This time Bangar took out Mark Butcher and John Crawley, and England were reduced to 148 for 4.

But England were not done. Hussain counterattacked, while the venerable Alec Stewart hung on. Stewart, 39, had kept wickets for over 180 overs before being left stranded on 78 in the first innings. India needed six wickets on the last day.

Hussain carried the attack on to the fifth morning before Kumble snared him for a 194-ball 110, caught at bat-pad. Andrew Flintoff registered his second pair in as many Tests at Headingley (he would later score three consecutive fifties at the ground). Kumble got Stewart edging off a leg-break. And the rest capitulated. Kumble walked off with 4 for 66.

Player of the Match: Rahul Dravid. 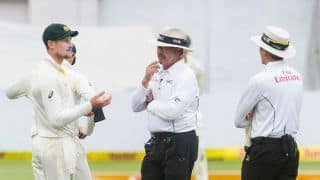