Under the leadership of Virat Kohli, India defeated Sri Lanka by 2-1.

Under the leadership of Virat Kohli, India defeated Sri Lanka by 2-1 in the three-Test series in Sri Lanka. Bharath Seervi lists important statistics and records at the conclusion of the historic series win for India.

Virat Kohli and his young brigade have registered a historical victory for India on the Sri Lankan soil. The team won a Test series in Sri Lanka for the first time in 22 years. The victory is special considering the fact that the side consisted of less experienced players. It is the also India’s first away series win since beating West Indies in 2011. Following are the important statistics and records of the three-match series. Scorecard: India vs Sri Lanka, 3rd Test at Colombo

The last time India won a Test series in Sri Lanka was in 1993 under the captaincy of Mohammad Azharuddin. On that occasion India had defeated Sri Lanka 1-0 in a three-Test series. India had won the second Test at SSC, Colombo, while the other two were drawn. Manoj Prabhakar was the Man of the Match for India in that Test.

Winning a 3- Test series after losing the first Test

India lost the first Test by 63 runs but won the next two Tests by huge margins of 278 runs and 117 runs to clinch the series. For the first time have they won an overseas three-Test series after losing the first Test. Even at home they have done it only once, in the famous 2000-01 Border-Gavaskar Trophy: Australia won the first Test at Wankhede Stadium by 10 wickets, but India pulled off a sensational 171-run victory at Eden Gardens before pulling off a nail-biter at Chepauk by a 2-wicket margin.

Overall, it was the 12th occasion where a team won a three-Test series after losing the first Test. The last to do the same was England against New Zealand in New Zealand in 2007-08. Virat Kohli-KL Rahul, and other high 3rd-wicket partnerships after losing first two wickets

Highest opening partnership of the series being of just 15 runs

–          It is the first series of two or more Tests where the highest opening partnership was below 20 runs. The previous lowest was of 22 runs in the Border-Gavaskar Trophy of 1999-00 in Australia.

–          Sri Lanka has had a few Test series with the highest partnership being less than 15. The lowest is 10, in the 2006 series in England. Ravichandran Ashwin’s 6 for 46: Best bowling figures for India in Sri Lanka

Amit Mishra took 15 wickets and scored 157 runs. He became the first Indian to score 150 runs and take 15 wickets in a Test series of three of fewer matches. The previous best all-round performance was by Ravichandran Ashwin (121 runs and 22 wickets) against West Indies in India in 2011-12 from three Tests. 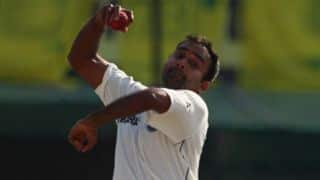