Well this was not a record breaking match but there were few stats which you would like to know.

The second One-Day International (ODI) between India and New Zealand was played at Feroz Shah Kotla Stadium of Delhi. Bowling first, India managed to restrict New Zealand to 242 despite captain Kane Williamson s valiant 118. Pacer Jasprit Bumrah and Leggie Amit Mishra scalped three-wickets each from India. India in their chase got off to a poor start as they lost four-wickets at 73. From there on, skipper MS Dhoni and Kedar Jadhav built a partnership of 66. Further, Dhoni and Jadhav both got out, followed by Akshar Patel and Amit Mishra s wicket but Hardik Pandya, the man who bowled India to a win at Dharamsala, almost did the job with the bat this time. Pandya scored 36 from 32 and after he got out, New Zealand pulled off a six-run win. Well this was not a record breaking match but there were few stats which you would like to know.

400th defeat for India in ODIs. India became first team to have lost 400 ODIs and the only other team which is close to this landmark is Pakistan with 383 loses.

Kane Williamson became third Kiwi captain to score a century against India in ODIs. Previous two captains from New Zealand were Ken Rutherford and Glenn Turner. Williamson s 118 is also the highest score by a Kiwi skipper against India.

This was Williamson s eighth century in ODIs. This is the joint fourth most number of centuries by a Kiwi batsman in ODIs after Stephen Fleming (8), Martin Guptill (10), Ross Taylor (15) and Nathan Astle (15). In terms of fifty plus scores, Williamson has now surpassed Scott Styris. This was his 33rd fifty plus score in ODIs, which is the seventh most by a Kiwi batsman.

With the help of his 46, Latham became the 40th New Zealand batsman to have scored 1,000 or more runs ODIs.

New Zealand s victory by six runs is their first win against India in India since November 2003. After 2003, New Zealand played only one bilateral ODI series in India, which they lost by 5-0.

Trent Boult conceded only 25 runs from his spell of 10 overs 3rd most economical spell by any Kiwi bowler against India in India (10 overs spell). 49-run stand between Hardik Pandya and Umesh Yadav is the highest 9th wicket is the highest by an Indian pair against New Zealand at home. Overall, this is the third highest partnership by any Indian pair for ninth wicket against New Zealand in ODIs.

In Delhi, in a day-night game, a score in excess of 238 has not been chased down under lights. We did not see that happen today as well. India chased that total against England in 2011. It was an eight-wicket victory. 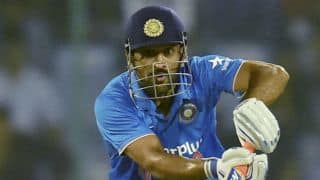 MS Dhoni: India lost wickets against the run of play vs New Zealand in 2nd ODI 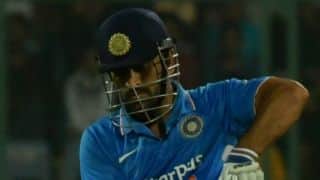 MS Dhoni: Wanted to bat up and play a few more strokes vs New Zealand in 2nd ODI