Ravichandran Ashwin grabbed 6 for 41 as India stopped Australia in their tracks to win an intense second Test and level the series 1-1 on Tuesday. Australia, needing 188 for victory, were bowled out for just 112 half an hour into the final session on Day Four at M Chinnaswamy Stadium, Bengaluru. Tempers frayed between the world s top two ranked sides as the hosts bounced back from a humiliating opening Test defeat in Pune. Cheteshwar Pujara (92) and Ajinkya Rahane (52) put on a crucial 118-run partnership for the fifth wicket before Mitchell Starc and Josh Hazlewood struck back in the morning session, taking 4 for 8 in 9 balls. The last two Indian wickets then added a crucial 28. Australia reached 67 for 2 before losing their last 8 wickets for 45. The next Test will be played at Ranchi, from March 16. At the end of this Test, many interesting statistics come into notice and we present some of them.

1st instance of India winning the second Test of the series of 4 or more matches after losing the first one since they did it against England in 1972-73.

5th time India defended target of below 200. This was also the joint 4th-lowest target successfully defended by India and joint-3rd at home.

200 wickets for Ashwin at home. He became 19th overall and 4th Indian bowler to achieve this feat. Ashwin reached this landmark in 30 Tests, which makes him the fastest to this record by a distance.

25 five-wicket hauls for Ashwin, the joint 2nd-most by any Indian bowler after Kumble (35). Ashwin is now level with Harbhajan Singh (25) and joint 9th overall.

13 six-wicket hauls for Ashwin, the joint 2nd-most by any Indian bowler after Kumble (19). Ashwin is now level with Harbhajan (13) and joint-6th overall.

0 bowlers to take 25 five-wicket hauls in Tests as quickly as Ashwin. He took his 25th five-for in his 47th Test. He broke the record of Richard Hadlee (62).

1st instance of Pujara getting dismissed in 90s. He was dismissed by Hazlewood on 92. Had he completed his century, it would have been this 4th in this season; he would have equalled the Indian record of 4 hundreds by a No. 3 batsman in a season, held by Mohinder Amarnath in 1982-83.

Note: There are two more Tests still to be played in this series.

7 times Umesh scalped Shaun Marsh in Tests, the most by any bowler. Umesh is way ahead of the bowler at second spot Vernon Philander, who has dismissed Shaun Marsh on 4 times.

10th bowler to achieve the double of taking 8 wickets in an innings and none in the other of the same Test Lyon. He took 8 for 50 in the first innings and 0 for 82 in the second innings. He became the 2nd Australian to do this. Ian Botham is the only bowler to do this twice in his career.

145 wickets of left-handed batsman scalped by Ashwin so far, the 4th-most by any bowler after Muttiah Muralitharan (191), Shane Warne (172) and Kumble (167). Ashwin went past Harbhajan s tally of 139.

4 times Ashwin scalped Matthew Wade s wicket in Tests, the most by any bowler. No other bowler has dismissed Wade even thrice.

4 times Ashwin scalped Lyon s wicket in Tests, the most by any bowler. The previous best was of 3, jointly held by Steyn, Herath, Yasir and Dilruwan Perera.

6 times Ashwin scalped Starc s wicket in Tests, the most by any bowler. No other bowler has even dismissed Starc even 5 times.

2nd Man of the Match award for KL Rahul in Test cricket. He had earlier won the award against Sri Lanka at P Sara Oval in 2015.

2,103 balls faced by Pujara in this season. He became the first cricketer to face 2,000 balls in a home season. He went past Kohli s 1,980 in the ongoing season.

0 wicket fell in the final session of Day Three of this Test. This was the first session in this series where no wicket fell.

2nd instance of two Indian batsman scoring 1,000 runs in the same season. Kohli and Pujara have done it in the ongoing season. The only such instance had happened in 2003-04, where Virender Sehwag and Dravid both scored 1,000 runs.

58 wickets for Lyon against India. This is the most number of wickets by an Australian bowler against India. Before this Test, Lyon had 50 wickets against India, and his 8-wicket haul took him past Brett Lee (53), Richie Benaud (52) and Glenn McGrath (51).

3rd 7-for by Lyon against India, the most by a bowler against India. The previous record of 2 was held jointly held by Alec Bedser, Lance Gibbs, Ray Lindwall and Murali.

7 out of 8 Indian batsmen who fell to Lyon in the first innings recorded either most number of dismissals against the Australian spinner or joint-most. In other words, no one has dismissed these men as frequently as Lyon. 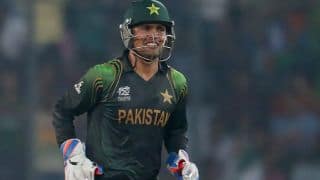 Kamran Akmal: At 35, I am quite fit to play in all three formats 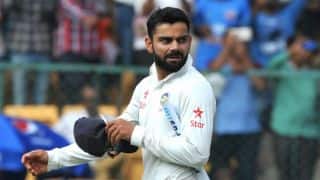