The two teams have played nine matches in the Asia Cup and India have won five of them.

India take on Pakistan in the sixth match of Asia Cup 2014 on March 2 at Mirpur. It is an eagerly awaited clash between two arch-rivals. India and Pakistan have both won one and lost one match in the Asia Cup. The winner of this clash will not only get ahead in the points table but also gain an upper-hand in terms of qualifying for the final. While India lost their previous match against Sri Lanka, Pakistan beat Afghanistan. But the form book goes out of the window when these two teams meet each other.

Pakistan have had the better of the two teams in One-Day Internationals (ODIs). The teams have played each other on 125 occasions in ODIs and Pakistan have won 71 times. India have tasted victory 50 times. But India’s form against Pakistan has changed for the better from after the ICC World Cup 2003. India have defeated their neighbours on 21 occasions from a total of 40. India have been the better team in international cricket over the last 10 years, but as mentioned above, form counts for nothing when it comes to India and Pakistan.

In the Champions Trophy, Pakistan have won two of the three times the teams have clashed. But India comfortably beat Pakistan the last time they played in the tournament. The match was in Birmingham on June 15, 2013. India bowled out Pakistan for 165. They chased down a revised target of 102 with ease via the Duckworth-Lewis method. In fact, that was the last time, the two teams have faced off against each other. So, there has to be heightened anticipation for this game. Even in three World T20 meetings, India have prevailed twice and tied once.

Below is a table showcasing the record between India and Pakistan in the World Cup, Asia Cup, Champions Trophy, World T20 and ODIs overall:

India have also won five of the previous 11 Asia Cup titles. Pakistan have won only twice. Sri Lanka have won on four occasions. So, in the history of the Asia Cup as well, India have had the better of Pakistan. The current two teams seem to be well-matched. India have a young team led by Virat Kohli. There is not a wealth of experience in the squad, but their strength is in batting. On the other hand, Pakistan have a relatively more experienced squad led by Misbah-ul-Haq. Their bowling has always been their strength and it won’tt change for this chapter of the iconic rivalry.

India versus Pakistan can be like a derby match in football. A derby match means two teams from the same city or vicinity playing against each other in any tournament. Even if one team is dominant over the other, upsets are seen quite often as form has no bearing. The emotions run wild amongst fans and the players themselves. Everything stops when a derby match is going on. That is exactly how it is when India taken one Pakistan in cricket. The teams are from neighbouring countries and there is a long history between the two countries. The fans will get very emotional, as beating the other is the most important thing.

History in major tournament suggests India should prevail. But one cannot really predict winners when this clash occurs. 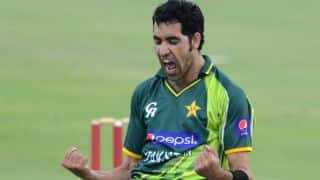 India vs Pakistan Asia Cup 2014: Umar Gul’s chance to go for the glory