Polly Umrigar set up India's first Test victory with an exquisite 130 not out.

On February 9, 1952 Polly Umrigar produced an innings of exquisite quality against a strong English attack. Abhishek Mukherjee looks back at the innings that had helped set up the first-ever Test victory for India.

India were trailing 0-1 going into the fifth and final Test at Madras. The selectors decided to make five changes: they left out Vijay Manjrekar, CS Nayudu, Sadu Shinde, “Nana” Joshi, and Hemu Adhikari, and brought in Lala Amarnath, Mushtaq Ali, CD Gopinath, Ramesh Divecha and Probir Sen. The side had originally contained Adhikari, but when he suffered from a sprained wrist, Polly Umrigar was retained despite his indifferent form in the series.

Donald Carr won the toss and elected to bat. Dattu Phadkar gave India the early breakthrough, but Dick Spooner and Tom Graveney added 68 before Vinoo Mankad struck. Sixty more runs were added, and England looked comfortable. It was then that Vijay Hazare, the captain, removed Spooner.

Even then England looked being in control of the match at 174 for 3. Mankad took two more wickets, and England reached 224 for 5 at stumps, with Jack Robertson holding fort with a dour, gritty performance. During the afternoon news came in that King George VI had passed away, and the next day was hastily declared a rest day.

As play got under way after a day’s break, Mankad cast his spell on the hapless English batsmen. His minimalistic three-step run-up, tantalising control, his subtle variations in flight and supreme control over the amount of spin soon had the English batsmen reeling. Robertson and Carr offered some resistance, but once Mankad removed Robertson, the floodgates opened. Mankad ran through the side, and returned figures of 38.5-15-55-8; such were his skills of deception that four batsmen — including three of the last four — were stumped by Sen. England were bowled out for 266 from a stage when they were 244 for 5.

India responded well, with Mushtaq, Hazare and Mankad all crossing 20. However, it was Roy who held the innings together. His supreme concentration helped him counter bowlers of the pedigree of Brian Statham and Roy Tattersall, and as the game progressed, he reached a well-deserved hundred in the final session. When Roy finally fell to Tattersall, he had scored 111 out of a team score of 191. India ended the day at 206 for 4. They were the strong side, but England still had a chance to get back into the match.

Statham had Amarnath caught behind early on the third day. It was 216 for 5 when tall, broad-shouldered Umrigar walked out to join Phadkar. He had been demoted to No. 7 due to his poor form and he had to prove the selectors wrong.

As Phadkar began to exert himself on the English attack, Umrigar slowly began to open up. Once he regained his touch, Umrigar began to take charge. He went neck-to-neck with Phadkar. Soon the English total was overcome, and the batsmen remained together as India approached 300.

Both batsmen had tall, strong frames with broad shoulders and muscular forearms, and could hit the ball very hard. They matched each other stroke by stroke. The lead soon crossed the 50-mark. Then Malcolm Hilton went past Phadkar’s defense. The two had put up 104 runs.

The wristy Gopinath walked out to join Umrigar. Now being the batsman in charge, Umrigar went on to play what he has always referred to as the greatest innings of his career. With Gopinath for company, Umrigar began to flow. The blitzing drives and the bludgeoned pulls came along as his strong biceps and forearms glistened in the hot Madras afternoon. Combining his technique, footwork and muscle power, Umrigar approached his hundred as well as taking India towards the 400-mark.

Then it happened: Umrigar — he had gone on to hold the Indian record for most runs for a few decades — went on to register his maiden Test hundred. Gopinath fell after a 93-run partnership, but Umrigar carrying on, continuing with his assortment of strokes as wickets kept falling around him. With a few overs left, Hazare decided to declare on 457 for 9 with Umrigar on an unbeaten 130.

If Roy had laid the foundation, Umrigar had set up the match for India. After Mankad’s crafty demolition of the English batsmen and Roy’s initial caution, Umrigar simply demolished whatever confidence was left of the English. His innings went on to define the Test, and as a result, create history.

India were in firm control. The tired English openers were 12 without loss at stumps.

The next day saw yet another display of spin bowling from Mankad, this time supported capably by Ghulam Ahmed. After Phadkar and Divecha provided the initial breakthroughs, England managed to reach 68 for 2 and then 117 for 3. However, Mankad took 4 for 53 and Ghulam 4 for 77 to bowl out England for 186, resulting in a victory by an innings and 8 runs. Mankad finished with match figures of 69.5-24-108-12. He had taken 34 wickets in the series. He had also scored 223 runs. In a few months he would be told by BCCI that he was not guaranteed a place in the side, and India “can produce 10 spinners like him if they wanted to”.

It was a historic moment. It had taken India 20 years and 25 Tests to register their first victory, and the eleven players realised they had pulled off something special. However, according to Gopinath, the Indians celebrated themselves by merely patting each other on their backs. The spectators, though, went berserk, and gave the Indians a standing ovation.

There was no cash reward announced for the men who had created history. They had to be content with their match fees of — hold your breath — Rs 250 each. In contrast, when MS Dhoni led India to their 100th Test win, each member was given Rs 2,500,000 by BCCI. It was simply a matter of four more zeroes! 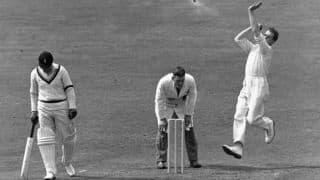 Jim Laker: The immortal off-spinner who took 19 wickets in a Test