India came agonisingly close to win the ICC World T20 2014 but lose out to Sri Lanka in the final. Overall, India were the better team in the tournament notching up comfortable victories till the semi-final. Virat Kohli was India’s star performer, but there were others who also impressed. Shrikant Shankar analyses each and every Indian player’s contribution and hands the report card for the entire tournament.

According to batting order in the final

One might think that Rohit Sharma had a poor ICC World T20 2014, but contrary to popular belief, he actually had good outing. He came into the tournament with form not on his side. But in the end was the World T20’s fourth highest run-getter with 200 runs. He struck two half-centuries with a best of 62 not out. It is the sheer talent that he possesses which leads to high expectations. Could have done better in the final, though.

Not sure what to make out of Ajinkya Rahane’s tournament. He didn’t play the initial phase, but was in the team for the last three matches. He had one notable score of 32 against South Africa, but in all, Rahane scored only 54 runs.

Hand down, the player of the tournament! Virat Kohli would be highly disappointed that his almost God-like form could not help India win the title in the end. He scored four half-centuries in six matches with a highest of 77 in the final. He also scored an unbeaten 72 to guide India in the semi-final against South Africa. He ended up as the leading run-scorer by a distance. His final tally was 319 runs at a ridiculous average of 106.33 and a healthy strike-rate of 129.14. It doesn’t get better than this.

It is a very sad situation that Yuvraj Singh will be remembered for his performances in the final. His 11 off 21 deliveries made more headlines than Sri Lanka winning the World T20 title. Yuvraj had a less-than average tournament. But he did have one good innings against Australia where he scored 60 runs in India’s comfortable win. Overall he could only manage 100 runs.

MS Dhoni did not have much to do with the bat in the World T20 as his batsmen took care of business. But it was his captaincy while India bowled that helped the team win their matches with ease. he shuffled his bowling very well and his field placements were also spot on. It sort of came to an anti-climatic end in the final, where it was all Sri Lanka’s day.

Again like Dhoni, Suresh Raina did not get many opportunities to bat in the tournament. He did score 63 runs in four innings with a highest of 35 not out. He was also used to bowl a few overs in almost every match and did well according to his capabilities.

Ravichandran Ashwin was magnificent for India in the World T20. He started off below the radar taking one wicket in the first two matches. But then turned on the style as he took nine wickets in the next three matches. His ‘T20 Ball of the Century’ to Hashim Amla was his highlight of the tournament. Ashwin took one wicket in the final, but couldn’t do much as Sri Lanka chased down a modest 131-run target with six wickets to spare. Ashwin ended with 11 wickets in the tournament.

He was another player who did not have much to do with the bat. But Ravindra Jadeja was not very effective with the ball either. he only picked up five wickets in six matches. His fielding was superb though.

The leg-spinner started the tournament with two consecutive Man of the Match awards. Amit Mishra took 10 wickets in total in the World T20. He did concede many runs against South Africa in the semi-finals and as the other Indian bowlers, was left with too much to do in the final.

Now Bhuvneshwar Kumar might have only had an economy rate of 5.42 in the entire tournament, but that is not enough. As a leading bowler, he only picked up four wickets in six matches. he didn’t bowl as many overs like the spinners, but we did see fast bowlers in other teams be very effective and also amongst the wickets.

He was only selected in the side for the final so that a winning XI does not change. But there is no such thing and one has to pick teams according to conditions and the opposition’s strengths and weaknesses. Mohit Sharma’s economy rate was 9.00. He didn’t offer much and does not have the pace to trouble class batsmen.

The Indian opener played the first three matches, but could only manage a total of 31 runs. His highest in that was 30 against Pakistan. He then was dismissed for a duck against West Indies and was out for one against Bangladesh. Not good figures for someone who has the ability to do much better

Like Dhawan, Mohammed Shami played the first three matches for India. He can bowl quick, but was actually quite expensive in his spells.

Both Varun and Stuart Binny did not play a single match in the World T20. 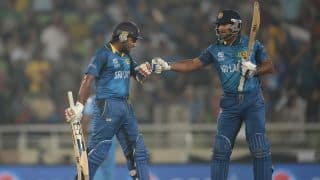 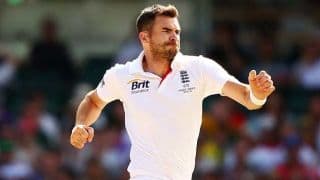 James Anderson back in swing with five-for in County Championship