This was India’s 135th Test win, 93rd at home, 24th against England and 11th at Wankhede Stadium.

The fourth Test of the 5-match series between India and England at Wankhede Stadium, Mumbai ended in hosts favour. Batting first, England posted an impressive 400 on board with the help of debutant Keaton Jennings’ hundred, Moeen Ali’s fifty and Jos Buttler’s impressive 76 against Ravichandran Ashwin (6 for 112) and Ravindra Jadeja (4 for 109). In return, India replied strongly, banking on Virat Kohli’s 235, Murali Vijay’s 136 and Jayant Yadav’s maiden Test century (104). Adil Rashid took 4 wickets, but conceded 192 runs. India put up 631. England needed 231 to make India bat again, but collapsed on the fifth morning, being bowled out for 195 after being 141 for 3. There was resistance from Joe Root (77) and Jonny Bairstow (51), but there was little resistance against Ashwin (6 for 55). Abhishek Kumar presents some interesting numbers from the contest.

This was India’s 135th Test win, 93rd at home, 24th against England and 11th at Wankhede Stadium.

This was England’s 21st defeat for England under Alastair Cook, their joint-most under any Test captain. England lost 21 Tests under Michael Atherton.

This was India’s 17th consecutive Test without defeat under Kohli’s captaincy, their joint-longest unbeaten streak. Their previous such unbeaten streak came between September 1985 and March 1987 under Kapil Dev.

With this win, India have ensured their 5th consecutive Test series victory, their joint-best. India had enjoyed a similar run between October 2008 and January 2010.

India also registered their 8th win in 2016, their joint-most in a calendar year. India had won the same number of Tests in 2010. They still have a Test to play this year.

This is India’s 9th win in a Test series consisting of 5 or more matches. India have played 33 series of 5 or more Tests.

Ashwin has now 24 five-wicket haul in Tests, the 3rd-most by any Indian bowler after Anil Kumble (35) and Harbhajan Singh (25). Overall, Ashwin is currently joint-11th in terms of taking most 5-wicket hauls.

Jayant became the 1st Indian batsman to score a hundred at No. 9. The previous highest by an Indian at this position was 90 by Farokh Engineer against New Zealand in 1965 at Madras (now Chennai). Overall, he became 15th batsman to hit a ton at No. 9. The last to do so was Stuart Broad in 2010 against Pakistan at Lord’s.

The 8th-wicket stand of 241 runs between Kohli and Jayant is a new Indian record. The previous highest 8th-wicket stand for India was 161 between Mohammad Azharuddin and Kumble, against South Africa at Calcutta (now Kolkata) in 1996-97. It is also the highest 9th-wicket stand on Indian soil, and the 7th-highest in history.

This was also the third-highest partnership for any wicket at Wankhede Stadium, after 298* (Dilip Vengsarkar and Ravi Shastri against Australia, 1986-87) and 256 (Sachin Tendulkar and Sourav Ganguly against Sri Lanka, 1997-98).

Of course, Ashwin has finished the Test with usual plethora of records. To read them, click here.

With 640 runs in this series so far, Kohli is the 2nd Indian captain to make 600 or more runs in a Test series after Gavaskar (732 against West Indies in 1978-79). This is the second time Kohli has scored more than 600 runs in a series. Gavaskar is the only other Indian to have done the same.

Kohli’s 235 is the highest score by an Indian captain in Tests. Kohli went past MS Dhoni’s 224 against Australia in 2013.

James Anderson has now scored his 16th unbeaten nought in Test cricket, going past Bhagwat Chandrasekhar and Courtney Walsh (15 each). He is behind only Chris Martin (28) and Makhaya Ntini (18).

In England’s second innings, Cook, Jennings and Root presented only the 40th instance (6th for England, 4th against India) of the first three batsmen in a line-up being dismissed LBW. Three of four instances against India have come this season. Before today, the others two occasions came at Indore (Tom Latham, Martin Guptill and Kane Williamson) and at Visakhapatnam (Cook, Haseeb Hameed and Root).

Murali Vijay scored his 8th Test hundred, all of them as opener. Of Indian openers, only Gavaskar (33), Virender Sehwag (22) and Gautam Gambhir (9) has more Test hundreds, while Navjot Sidhu also has 8. 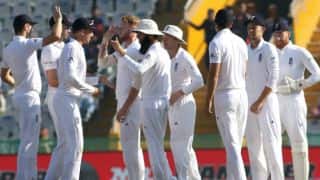 India vs England, 4th Test: Marks out of 10 for visitors Jayant Yadav speaks on batting along Virat Kohli, his maiden century and more