India’s ODI series vs England 2014: What difference can the new coaching set-up make?

India’s ODI series vs England 2014: What difference can the new coaching set-up make?

To asses the new backroom staff after a five match ODI series would be rather unfair.

Communication within the team: This is one unnoticed area when a team wins or loses. The strategies, the pep-talks and the attitude for the matches are decided in these team meetings. In the longer run, pep talks and strategies are not the solution for Indian cricket. But they can make a key difference as far as this series is concerned. Remember, Darren Lehmann replacing Mickey Arthur in the run-up to  Ashes 2013? Well, Lehmann too didn’t make any difference early on. But the atmosphere in the team was evident. The players started enjoying themselves. And the results were evident in  Ashes 2013-14, where Lehmann’s team trounced England 5-0. While they were competitive, the new coach infused a sense of positivity. If the board is looking at these assistant coaches for a longer run at least till the World Cup, there will be some noticeable difference by the time the team regroups for a series towards the end of the year.

Team selections: This is a tricky area for them. India’s ODI unit looks much settled than the Test though the results in either of them haven’t been worthy to note of. There’s no doubt that the captain always looks forward to the support staff for their inputs while deciding the playing XI he wants. The people around MS Dhoni to advice are different and the inputs could very well influence the skipper. Dhoni has often been a touch rigid in proactively making changes in his XI. The current ODI team involves the regular faces from the past two-three series and some new talents. Since it is early days for the coaches they wouldn’t want to tinker the captain’s preference.

What purpose will these five ODI’s serve for the new support staff?

India are scheduled two play only two more ODI series ahead of ICC World Cup 2015.  Apart from the certainties in the squad, the selectors are keen to pick a few resources from the domestic ODI matches that have been rescheduled before the Ranji season keeping in mind the World Cup ahead. These five matches in England will allow Ravi Shastri and co. to get a hang of who is in sync with the plans for the World Cup.

Moreover, there was no evaluation of the defeats and wins in the recent tours. Shastri’s inclusion as a ‘Team Director’ and his authority to oversee all affairs means he is responsible to evaluate the players along with drafting the ‘report-card’ for the Test defeats.

What happens if India loses the ODI series? In the end, even a board known for its apathetic attitude to critical issues concerning the sport will understand that allowing a new set-up only a five-match series to bring in change is rather unfair. Though the future of these coaches is still unclear, they might very well be given a longer rope. It would be far-fetched to link the performance of the team to coaches so early. 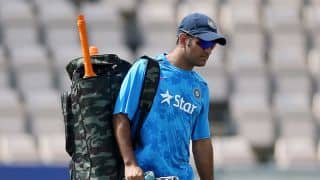