India's pace-bowling inconsistencies, as underlined in India vs Australia 2015-16 series, cause for great alarm

India's pace-bowling inconsistencies, as underlined in India vs Australia 2015-16 series, cause for great

The Indian attack repeatedly fails to use their talents to optimal effect, as evidenced in the ongoing series against Australia.

India succumbed to yet another defeat at the hands of Australia at the Melbourne Cricket Ground (MCG) and as a result the series has been conceded. While the Indian bowlers have been poor through the course of the series, this match further highlights their inadequacies. In the first two games, the Indians never got too much of a sniff but the case was vastly different in the third ODI. In the middle overs Australia were floundering having lost a few wickets, yet the Indian fast bowlers failed to maintain any pressure and ultimately conceded a rather easy win to the opposition. This trend is gravely concerning for the Indians. Rishad D’Souza elaborates. FULL CRICKET SCORECARD: India vs Australia 2015-16, 3rd ODI at MCG

The Indian batsmen have met the challenge of facing the Australian bowlers in their own conditions with great resolve. Twice in the series they have crossed the 300-run mark and in fact got to record totals at Perth and Brisbane, only to have the bowlers concede record chases. In the third ODI at the cavernous MCG they managed to pile on 295. The pitch had something in it for the bowlers and the sheer size of MCG makes it difficult for batsmen to hit frequent boundaries. The total of 295 was surely defendable by any measure.

Yet, as in the previous two matches, the Indian fast bowlers faltered. At Perth and Brisbane they could be given the margin since the WACA and Gabba surfaces were uncharacteristically tipped in favour of batsmen. The fact that India played two spinners on those tracks which had even lesser support for spin-bowling can also be used in their defence. MATCH REPORT: India vs Australia 2015-16, 3rd ODI at Melbourne

None of that can be used as an excuse in the third ODI. India finally chose to play four seam bowlers, replacing offie Ravichandran Ashwin with Rishi Dhawan. Moreover, in stark contrast to the previous games, India had some momentum in their bowling innings. There were periods when they looked that they would win comfortably only for a couple of bad overs from the pace bowlers to restore the favour with Australia.

The problem is not that India lack talent or ability. In fact laid down on paper, the pace attack that played at Melbourne looked quite well rounded. Umesh Yadav has discomforting pace and some swing. Ishant Sharma has the natural bounce to pry out batsmen. Barinder Sran is a fresh talent being hailed by all who have seen him perform on the flat pitches of India. Rishi Dhawan is a decent bowler limited by pace, but a tendency to bowl a nagging tight line to build pressure. FULL UPDATES: India vs Australia 2015-16, 3rd ODI at MCG

Yet, they misfired and conceded Australia a series-clinching victory even though they had the hosts under the pump. Their inability to harness the best of their potential more regularly is a worrying trend and is losing India games. Their core strengths are being blunted by a common weakness: inconsistency.

Yadav bowled some fantastic deliveries and kept the batsmen on their toes for the most part of an over only to release the resulting pressure by conceding one bad ball every now and again. The case with Ishant was similar. He got the ball to rise sharply but failed to hit the ideal line and length more often. Sran probably got the most prodigious swing in his opening spell but his areas of pitching were unfathomable. Dhawan playing his debut game kept the lid on scoring initially but became wayward later on.

This is far from a one-off case; the trend of India’s pace bowlers’ inconsistency has been seen for far too long and they need to get their act straight. With the kind of potential India’s pacers have, seeing them squander it every game is an almost unbearable sight. There needs to be a solution to this gaping problem or India will continue to lose ODI series without much fight.

Hairy tales: Maxwell quips he has more hair than Sehwag when asked about their relation 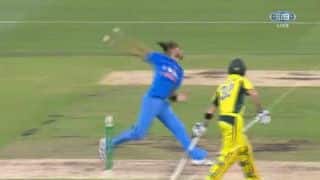