How soon Indian team recovers from the blow of losing one of the best limited-overs finishers from the role is something that only time will tell.

For once, let us forget about the outcome of the fourth ODI between India and New Zealand. Those on the Indian side of the warring parties, who are still following this somewhat inconsequential five-match 50-overs cricket series with some inexplicable enthusiasm, might still find their hearts heavy, following the loss which the Indian cricket team suffered on Wednesday night at Ranchi. At the hometown of the Indian captain, it was not MS Dhoni who had the last laugh; in fact, there was nothing from the game which could make him smile. Coming off a brilliant innings in the third match, Dhoni was not only expected to stretch his form, he was expected to end the drought of an ODI century. But a huge chasm between his bat and pad resulted in Dhoni s leg stump being felled, trigerring the Indian batting collapse. FULL CRICKET SCORECARD: India vs New Zealand, 4th ODI at Ranchi

No, it is not about being harsh on the cricketers who are new to the roles they just have been handed out by the team and their captain. It is about the fans, the experts, the media and all those who remain perennially impatient about how this Indian ODI side which remained without their top stars across departments shapes up in the time to come. Dhoni moving up to No. 4 is both, a boon and a bane for India. But how soon Indian team recovers from the blow of losing one of the best limited-overs finishers from the role is something that only time will tell. Till the time India do not find quality finishers and Dhoni settles in well at the most coveted spot in the batting line-up, India might find themselves in uncharted waters with no experienced sailor to rescue them.

In all probability, Dhoni will continue to bat at No. 4. To make himself deeply rooted into the role, the Indian captain who faced long-lasting criticism for not playing any amount of domestic cricket since he became an international cricketer will play for his state Jharkhand in the upcoming Vijay Hazare Trophy 2016-17. And there will be no criticism of India s most venerable cricketer at the moment for remaining away from the grass root level.

Yes, blame the BCCI and the ICC and whoever concerned for the packed international cricket calendars.

Nevertheless, transgression would be a crime. Dhoni s move to go up in the batting order has vacated the essential spot of a finisher in the Indian ODI side, and now, in the four matches that are left in the Indian calendar, for the build-up of the ICC Champions Trophy 2017, there will be a lot of experiments done which may or may not click. This is exactly what happened on Wednesday night against New Zealand at Ranchi, when as many as three batsmen failed in order to provide India the late impetus.

But are there really a total of three batsmen trying out their chances as potential finishers for the Indian team in the limited-overs cricket?

Not exactly. When Akshar Patel walked out at No. 5, India were still placed at a precarious position, but the hosts have been audacious enough to push the young talent at crucial moments, and this is exactly why Akshar walked out to bat ahead of some specialist batsmen in the ranks. For those uninitiated and still surprised with India s move of sending Akshar, there was some amount of thought process that was involved which those at a distance may not be aware of. ALSO READ: Amit Mishra s chance to stamp his authority in the Visakhapatnam decider

Akshar averages more than 54 in First-Class cricket, which is more than impressive for anyone to be sent up in the batting order at No. 5. And knowing Akshar, he cannot only just bat, but the left-hander can connect the ball cleanly, and hit the ball long and hard. So for those who have been in the impression that the Indian team management is looking up to the likes of Manish Pandey, Kedar Jadhav and Hardik Pandya, the assumption may be wrong as Akshar is also a very strong candidate.

These four young cricketers are not the only options that India have. There is Mandeep Singh in the ranks, there is KL Rahul who will come back in the Indian side after recovery to create further selection issues, and then, there is the curious case of vice-captain in Tests, Ajinkya Rahane. The right-hander has been filling in for Shikhar Dhawan after the latter suffered an injury in the second Test against New Zealand, but with just one half-century across four games which had good wickets to bat on, Rahane has not been able to change the perception that has been there about him as far as ODI cricket is concerned.

India may be having many options to try out as finishers , but there is not enough time for them to finalise on one. After the series decider against New Zealand at Visakhapatnam, there will be only three ODIs left in the calendar to prepare for what was once commonly known as the mini World Cup , and who knows, batting woes in England which have perennially hounded the Indian batsmen may force Dhoni to drop back again to No. 5 or 6 keeping the interests of the team in mind?

At the same time, the likes of Suresh Raina and Ravindra Jadeja cannot be counted out from the race. Both the batsmen have played crucial roles in the past for the Indian team both with the ball as well as the bat. Some of the new cricketers who are in contention, are yet to make their impression in this regard.

It will be beneficial for India if they are able to groom not just one, but a few more options for the role of finishers in limited-overs cricket. The over-dependency on Dhoni has not only resulted in India losing a few games when the batsman has failed, but it also has attracted some unwarranted criticism for the Indian captain. Dhoni has been brave to admit that his powers are waning, which is surely a move in the benefit of the team as the focus will be on the development of cricketers for the future more. 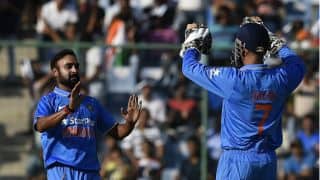 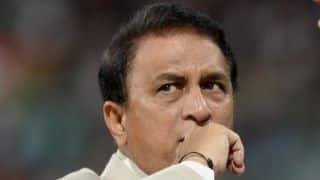