India and collapses have an intriguing relation; often if the top order batsmen got out, it would take nothing short of a miracle for India to win.

India and collapses have an intriguing relation, right since the 1980s. It was an era when, if the top order batsmen got out, it would take nothing short of a miracle for India to win. This is a phenomenon that has occurred time and again with India; starting strongly and later crumbling under pressure. Throughout the 1990s it was almost a given that when Sachin Tendulkar got out India would almost certainly lose the match. While this worrying trend seemed to have been a thing of the past, India’s horror show against Australia in the fourth ODI at Canberra brought back those unpleasant memories. Shruti Hariharan takes a look back at a few more shocking losses faced by the Indian cricket team. Live Cricket Scorecard: India vs Australia 2015-16, 4th ODI at Canberra

1. India vs West Indies 1989, Nehru Cup, 8th match at Feroz Shah Kotla, Delhi — West Indies won by 20 runs: West Indies displayed an all round performance with bat and ball. Opener Richie Richardson struck 57 from 110 balls, while Viv Richards scored a typically belligerent 44 from 41 balls. For India, Chetan Sharma took 3 wickets and Arshad Ayub snared 2 wickets. India’s bowling display restricted West Indies to 196 in their first innings. In spite of brilliant spells by the Indian bowlers, their batsmen made a mockery of the chase.

So what went wrong? India started off well with Raman Lamba securing 61 from 60 balls and ace players like Mohinder Amarnath, Ravi Shastri scoring 21 and 23 respectively. Then Richards, never renowned for his bowling skills, started his magical spell. Richards picked up six Indian wickets at regular intervals, which included the likes Kapil Dev, Manoj Prabhakar, and Chetan Sharma who contributed single digit scores. From 158 for 5, India fell to 160 for 8 by the 38th over. Richards ended the innings by taking out Ayub as well. India were all out for 176 and went down by 20 runs. READ: Viv Richards’ 6 for 41 bowls West Indies to a thrilling victory over India

Tendulkar was dismissed for just 9 in the chase, but Sourav Ganguly (79) and Rahul Dravid (74) put on 130 for the second wicket. Dravid’s dismissal opened the floodgates though, and India kept losing wickets at regular intervals thereafter. From 157 for 1, India were bowled out for 231, losing 9 for 74 to lose a match they ought to have won easily.

Virender Sehwag (38) and Tendulkar got India off to a perfect start, thrashing 66 by the ninth over before Sehwag’s dismissal. Tendulkar was in vintage form, ripping apart Australia’s bowling with aplomb. Sadly for India, the batsmen at the other end simply could not cope. Gautam Gambhir (8), Yuvraj Singh (9), and MS Dhoni (6) fell in quick succession as India collapsed to 162 for 4. Suresh Raina then offered Tendulkar some much-needed support with 59. The duo added 137 for the fifth wicket before Raina’s dismissal. Harbhajan Singh departed in the same over. Tendulkar kept going, stroking his way to a phenomenal 175 off 141 balls. At the end of the 47th over, India needed 19 from 18 balls with 4 wickets remaining. Tendulkar was dismissed off the next ball, and India crashed to 347 all out, losing a won game by 3 runs. It was a throwback to the 1990s; Tendulkar’s dismissal brought about an end to India’s hopes despite being in a position from which victory was imminent.

4. India vs South Africa, ICC Cricket World Cup 2011, Nagpur — South Africa won by 3 wickets (with 2 balls remaining): India were a nigh unstoppable force during ICC Cricket World Cup 2011. They suffered just one loss in the tournament, and that was against South Africa at Nagpur. India got off to a fantastic start batting first, with Sehwag (73) and Tendulkar (111) putting on 142. Gambhir and Tendulkar then had another good stand worth 125. However, as was so often the case in the old days Tendulkar’s wicket was all South Africa needed. In a collapse even more monumental than the one India suffered in the fourth ODI against Australia, Dale Steyn’s fifer helped South Africa take India’s last 9 wickets for a shameful 29 runs. From looking set for a 350-plus score, India were shot out for just 296.

South Africa did not have any centurions, but Hashim Amla (61), Jacques Kallis (69), and AB de Villiers (52) got half-centuries, and almost everyone in the top nine got to double figures. Even so they won only in the final over thanks to Robin Peterson’s unbeaten 7-ball 18. READ: ICC World Cup 2011: Sachin Tendulkar sizzles, Indians choke and South Africans triumph

5. India vs Australia 2014-15, Border-Gavaskar Trophy, 1st Test at Adelaide — Australia won by 48 runs: While most other matches in this list are ODIs, India have also folded up spectacularly in Test cricket. Most recently, they did so against Australia in the first Test of the 2014-15 Border-Gavaskar series. Chasing 364 runs to win in the fourth innings, Murali Vijay (99) and Virat Kohli (141) put on what ought to have been a match-winning 185 runs for the third wicket. From 242 for 2, India lost wickets at regular intervals and got bowled out for 315, losing their last 8 wickets for 73 runs. READ: India vs Australia 2014-15, 1st Test at Adelaide: Centuries, wickets, spats, heartbreak, and other highlights

6. India vs Sri Lanka 2015, 1st Test at Galle — Sri Lanka won by 63 runs: India faced terrible backlash from their fans after a loss in the first Test of India’s 2015 tour of Sri Lanka. India grabbed a massive first-innings lead and looked set for an innings victory before a rejuvenated Sri Lanka posted an above-par total of 367 in their second innings, with Dinesh Chandimal scoring an unbelievable 162 from 169 balls. India’s ace spinner Ravichandran Ashwin took 10 wickets in the match, but India were set a challenging chase.

Only Shikhar Dhawan and Ajinkya Rahane could get to double figures for India, as Rangana Herath ran through the batting with 7 for 48. India were bowled out for a paltry score and lost by 63 runs despite having enjoyed a massive first-innings lead. 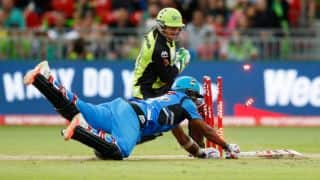