India are no longer lacking in the spin department thanks to Ravichandran Ashwin, Ravindra Jadeja, Amit Mishra, Akshar Patel, and Harbhajan Singh.

India have traditionally enjoyed the services of some outstanding spin bowlers over the course of their cricketing history. From Vinoo Mankad, Subash Gupte, and Ghulam Ahmed to Bishan Bedi, EAS Prasanna, Bhagwath Chandrasekhar, and Srinivas Venkataraghavan, to Anil Kumble and Harbhajan Singh, India have usually had at least one — and usually two — spinner who has won them games time and again. For a while it looked like India’s usually-healthy spin cupboard had finally turned bare: Ravichandran Ashwin had yet to evolve to the bowler he is today. Ravindra Jadeja was more of a line-and-length bowler. Amit Mishra was erratic. Harbhajan was past his prime. Akshar Patel was not ready for the big league. READ: Ravichandran Ashwin, Ravindra Jadeja, Amit Mishra: A throwback to an older era of Indian cricket

Mishra is one of the unluckiest Indian cricketers in the last few years. From being perpetually on the fringes of the side he was completely ignored, then given a brief recall during ICC World T20 2014 before again being dropped. He too has performed admirably in the last couple of series against Sri Lanka and South Africa. Akshar is yet to win a match on his own, but his domestic performances keep improving with every game. It seems inevitable that he too will find success. Meanwhile, Harbhajan seems to be on something of a comeback trail as well, having got a look-in for India’s Test and ODI teams recently, with reasonable success. READ: Ravichandran Ashwin, Ravindra Jadeja prey on batsmen’s doubts in India vs South Africa

And then there are the spinners in domestic cricket. KS Monish currently leads the list of wicket-takers in Ranji Trophy 2015-16, followed by Akshay Wakhare, Jalaj Saxena, and Shahbaz Nadeem. The likes of Pragyan Ojha, Kamlesh Makvana, Ankit Sharma, Vishal Dabholkar, Rahil Shah, Malolan Rangarajan, and Aamir Gani have also done well. That said, it has been a trend in Ranji Trophy recently that the pitches either turn square or seam and swing like a roadrunner on caffeine from Day One, so perhaps one should not look too deeply into the First-Class numbers this season.

The point remains that India are no longer lacking in the spin department. Ashwin is possibly the best spinner in world cricket at present, and the backup net of Jadeja, Mishra, Akshar, and Harbhajan means that, for now, India’s spin cupboard is far from bare. READ: India’s Test series win over South Africa masks discrepancies 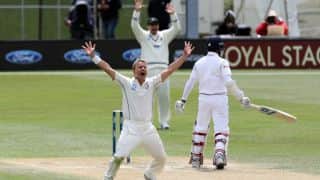