India's squad for last 2 ODIs against Sri Lanka: Robin Uthappa, Kedar Jadhav get lifelines ahead of ICC Wo

Robin Uthappa and Kedar Jadhav have been included in the Indian squad for remainder of Sri Lanka series.

India announced their squad for the last two One-Day Internationals (ODIs) against Sri Lanka after winning the third match comprehensively to set up a series victory. The squad offers no huge surprises, but Shiamak Unwalla feels the inclusion of Robin Uthappa and Kedar Jadhav offers a last-minute lifeline to the two.

With Virat Kohli leading the side admirably in the first three ODIs, India have sealed the five-match series 3-0. Shikhar Dhawan’s tremendous form — he scored 113, 79, and 91 — will be extremely encouraging for India going into a busy season Down Under.

Batting: Kohli, Ajinkya Rahane, Rohit Sharma, Ambati Rayudu, Suresh Raina, Uthappa, and Jadhav make up the ranks for India in the last two games. With Rahane looking in good form, Rohit will be free to get back into the groove as opener. However, without a designated wicketkeeper, the role is likely to be given to Uthappa.  With Wriddhiman Saha being dropped, Uthappa is the only most experienced wicketkeeper in the Indians ranks. But he is an opening batsman and Uthappa has been back into contention for the national side with good show in the Indian Premier League (IPL) as Kolkata Knight Riders’ (KKR) opener. India would face the problem of plenty in the opening slot as Rohit too would like to get back to his usual batting slot..  In all likeliness, Jadhav will  miss out unless one of Raina or Rayudu are rested.

All-rounders: Akshar Patel and Stuart Binny. With Akshar doing well in the limited opportunities he has received, he could give Ravindra Jadeja a run for his money. Binny has yet to receive the backing from regular captain MS Dhoni, but could find favour with Kohli.

Bowling: Dhawal Kulkarni, Vinay Kumar, Ravichandran Ashwin, Umesh Yadav, Karn Sharma, Akshar are India’s bowling options. With Ishant bowling quite well against Sri Lanka, his form has been encouraging for India. He has been rested for the last two ODIs, probably to keep him fresh as well as ready for the Tests against Australia. Ishant’s back is stiff, and he has not been included for the last two ODIs. In his absence, Kulkarni and Vinay Kumar could have a big role to play. In the spin department, Ashwin is likely to continue, with either one of Akshar or Karn backing him up.

Overall, the squad is good enough to take out Sri Lanka and complete a clean-sweep, even without the big names like Dhoni, Dhawan, Bhuvneshwar Kumar and Mohammed Shami in the side. Uthappa will want to grab this opportunity with both hands and show that he can be equally reliable as an opener and a wicketkeeper, while Jadhav will hope to get the chance to show his wares.

India squad for 4th and 5th ODIs versus Sri Lanka: 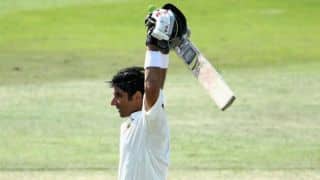