At this very ground, Sourav Ganguly s men suffered the heartbreak moment in the 2003 World Cup when Ricky Ponting smashed them to pulp en route to triumph.

Indian fans have memories attached to The Wanderers, Johannesburg. At this very ground, Sourav Ganguly s men had suffered the heartbreak moment in the 2003 World Cup when Ricky Ponting smashed them to pulp en route triumph. Four years later, MS Dhoni s India clinched a thriller against Pakistan to lift the inaugural World T20 trophy. In 2011, India pulled off a sensational one-run win over South Africa in an ODI at the very venue.

The nostalgia apart, India had a mixed run here in limited-overs cricket. But when it comes to Tests, they are yet to lose a game and they have played 5 now. They continued their march at The Wanderers with their 63-run win over South Africa in the third Test of the Freedom Trophy.

Here s a snippet of India s Test outings at Johannesburg, the venue of India s many memorable firsts.

It was the second Test of the series and India s second-ever in the country. South Africa elected to bat and were soon reduced to 26 for 4. An 85-run stand for the sixth wicket between Jonty Rhodes and Brian McMillan took South Africa to 292.

Sachin Tendulkar, then 19, painted his first hundred in South Africa and fourth of his career, against the might of Allan Donald, McMillan and Craig Matthews. Wickets tumbled at one end and at the other, Tendulkar stood firm, taking India close.

Anil Kumble, playing his fourth Test, claimed his maiden five-wicket haul in the second innings. Chasing 318, India managed to save the Test.

Man of the Match: Brian McMillan.

Tendulkar s India had lost the first 2 Tests. They elected to bat in the final Test and put up a valiant show courtesy Rahul Dravid s first Test hundred. Dravid and Ganguly added 135 for the fourth wicket. This was Ganguly s first fifty-plus score in South Africa. India put up 410 before Javagal Srinath s five-wicket haul ensured them a lead.

Dravid and Ganguly added 108 for the fourth wicket this time and set South Africa 356 to win. India were en route their maiden win in South Africa after reducing the hosts to 95 for 7. Daryll Cullinan defied the visitor s effort with a fine hundred and got support from Lance Klusener.

India were 2 wickets away from a famous win when bad light stopped play and South Africa escaped with a draw. India had to wait for a decade for their first win in South Africa.

Man of the Match: Rahul Dravid

India had to wait almost 10 years to play another Test at this venue. On a difficult surface to bat, against a tail-up South African attack, India elected to bat. Ganguly returned to the side after almost a year-long hiatus.

Against the odds Ganguly stroked a fine 51*, his first fifty on comeback, to take India to a respectable 249. Tendulkar and Dravid too fought it out early on and the innings received a pleasant late blitz from VRV Singh.

S Sreesanth then destroyed the South African batsmen with a sensational spell of swing bowling, one of the finest shows by an Indian ever. Sreesanth s first five-wicket haul of his career skittled South Africa out for 84.

Despite taking a 1-0 lead India went on to lose the next to Tests to concede the series.

Man of the Match: S Sreesanth.

For the first time an Indian team landed in South Africa without Tendulkar. India began their journey with The Wanderers Test. Electing to bat, they posted 280 against an attack comprising Dale Steyn, Vernon Philander, Morne Morkel, Jacques Kallis and Imran Tahir.

Virat Kohli filled the massive shoes at No. 4 for Tendulkar. Playing his first Test in South Africa, Kohli stroked a fine hundred, the fifth of his career and of course the first in South Africa.

The Indian pacers allowed the side to a lead with Ishant Sharma and Zaheer Khan claiming four-wicket hauls. Of course, Zaheer dismissed Smith again.

India continued to defy South Africa s pace attack. This time Cheteshwar Pujara led the way with 153 his first hundred overseas (in South Africa) and sixth overall. Kohli missed the landmark by 4 runs. The 222-run stand between Kohli and Pujara allowed India set up a target of 458.

South Africa were in a spot of bother at 197 for 4 when Jacques Kallis fell on the final day. Faf du Plessis and AB de Villiers survived the difficult spells from Indian pacers with several edges flying around.

They settled down before beginning to counterattack. AB and Faf struck hundreds and the score moved to 402 for 4. South Africa were inching closer to highest successful chase in Tests.

AB and Duminy fell in succession and Faf s wicket at 442 with over three overs left for the match gave South Africa a scare. The Test ended in a thrilling draw with Steyn smacking six off the final ball.

South Africa fell short by 8 runs and India were 3 wickets away.

While Smith led South Africa for 11 years, less than three years since his retirement, the side had seen three captains. Hashim Amla passed the baton to de Villiers, who happily passed it to his best friend du Plessis.

There was neither Kallis nor Smith but South Africa were still formidable and were up against the top-ranked Indian side. They were desperate to avenge the 0-3 routing they received in India two years prior.

Heading to Johannesburg, South Africa had sealed the series. Team India were under fire for lacklustre batting show and some baffling selections.

The green wicket prompted both the sides to field five pacers. Anticipating that the wicket will further break down, Kohli raised a few brows when he elected to bat.

Riding on luck, against a brilliant pace attack, Kohli and Pujara added 84 for the third wicket. Both batsmen battled out with fifties. The going was quite tough and Pujara got off the mark on the 53rd ball he faced. Bhuvneshwar Kumar s intelligent 30 in the end helped India to 187.

Post Day One s play, Pujara stated that 187 on this surface was like 300. He wasn t really wrong. All South Africa could manage was 194. Bhuvi got 3 while Jasprit Bumrah bagged his first five-wicket haul in Tests.

Amla, who got a fine 61, reciprocated Pujara s Day One thoughts when he called the surface one of the most difficult tracks he had batted on.

The pitch deteriorated further but not India s resilience. Amid the calls of stopping the play on a dangerous surface, India got to 247.

Murali Vijay was happy to take the blows in order to limp to a 127-ball 25. Kohli and Ajinkya Rahane showed their class with 41 and 48 respectively. Bhuvi s 33 and Shami s almost run-a-ball 27 helped India set a target of 241.

South Africa were a wicket down towards the end of Day Four when the play was called off after Dean Elgar was struck on the head off Bumrah. Umpires were not keen on carrying on but the captain decided to continue on Day Five.

Elgar and Amla showed resistance and South Africa were 124 for 1. More than 50 per cent of their mission achieved. Ishant Sharma and Jasprit Bumrah paired to tear apart the South African middle-order. Ishant accounted for the wickets of Amla and de Villiers while Bumrah sent back du Plessis and Quinton de Kock.

India registered their third win in South Africa and second at Johannesburg. India ensured they will finish another season with the No. 1 Test title and the ICC mace. Kohli registered his first win as captain outside the subcontinent and West Indies.

Bhuvi won his first Man of the Match award outside Asia.

Man of the Match: Bhuvneshwar Kumar. 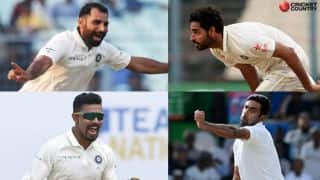 Indian bowling has never had it so good