Infographic: Virat Kohli’s 752 and counting, the most in a single edition of IPL

Infographic: Virat Kohli’s 752 and counting, the most in a single edition of IPL

While we thought the successful slam-bang methods of Chris Gayle and Brendon McCullum could make you count as a legend in this format, Virat Kohli showed how classical batting, nimble feet, and calculative approach can yield similar results if not better them.

Virat Kohli has made us believe that Bradmanesque numbers can be attained in the T20 format as well. Once upon a time, a fifty was considered gold. The history of T20 cricket dates back to over a decade but we already have a post-2015 T20 era where Kohli has redefined batting in this format. While we thought the successful slam-bang methods of Chris Gayle and Brendon McCullum could make you count as a legend in this format, Kohli showed how classical batting, nimble feet, and calculative approach can yield similar results if not better them.

Kohli has scored over 1,300 runs in T20 cricket this year. His tally of 752 runs so far in IPL 9 is the most by any batter in the tournament’s history. It is not just the runs that he has scored but the impact the knocks have had and led to Royal Challenger Bangalore’s (RCB’s) wins. Yes, he had the support of a genius named AB de Villiers at the other end, together amassing 1,349 runs this season but that is it, the two men have propelled a squad, who are eyeing their maiden IPL title. ALSO READ: Jos Buttler compares AB-Kohli to Ronaldo-Messi, while David Warner calls them “World’s Best”

In the list of top seven, Gayle features twice, as does Kohli. While Gayle’s outings were majorly one-man shows, Mike Hussey was very calculative at the top in 2013 edition that saw Chennai Super Kings (CSK) end up second best that season. His role was similar to that of Sachin Tendulkar in the 2010 edition. The Master got Mumbai Indians (MI) off to good starts, the side benefitted and they finished second that season.

However, of all these men so far, only Robin Uthappa tasted the sweetness of IPL glory when he topped the batting charts. In 2014, his rise at the top for Kolkata Knight Riders (KKR) saw them clinch the title. Uthappa’s hallmark was consistency.

Kohli, who had no T20 hundred a month back, became the only cricketer in the tournament’s history to smash three in a season. How is Kohli different from the others? Earlier, the role of openers was to get the team to a good start and then let the middle-order take over. READ MORE: Virat Kohli and the ridiculous consistency

Being one of the best finishers of the game, Kohli’s ploy differs. He is not concerned about the Powerplay overs. He focuses more on a steady start than a maverick one. He backs his abilities and knows that even if he starts with a 35 off 30, he can easily get 65 from the next 30 balls he faces.

Kohli’s eagerness to finish and willingness to put up a better show next time has been the difference between him and others. The responsibility of leadership seems to bring the best out of him. Split webbing or harsh conditions, he is unstoppable.

First batsman to an IPL 800? That seems a hit away for now. The scarier bit is the fact that if RCB go on to make the ultimate stage, Kohli, given his form, stands with a firm chance of grounding his feet on the unthinkable four-figure mark. 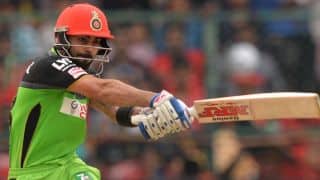