He is hardworking, sincere and dedicated on the field; humble, hopeful and confident off it. In an exclusive interview with CricketCountry s Karthik Parimal, Cheteshwar Pujara talks candidly about his experiences in First-Class and international cricket thus far, and also his thoughts on soon playing a big role in the Indian middle-order. He is hardworking, sincere and dedicated on the field; humble, hopeful and confident off it. In an exclusive interview with CricketCountry’s Karthik Parimal, Cheteshwar Pujara talks candidly about his experiences in First-Class and international cricket thus far, and also his thoughts on soon playing a big role in the Indian middle-order.

CricketCountry (CC):  It must have been an awesome privilege to share the dressing room with the likes of Sachin Tendulkar, Rahul Dravid and VVS Laxman. While I’m sure most people would have been helpful, whose advice has been most critical, and how?

Cheteshwar Pujara (CP):  Everyone has been equally helpful. These are cricketers I’ve grown up watching and I’ve learnt a lot from each one of them. I’ve often approached Sachin, Rahul bhai, Laxman and Virender Sehwag with my questions and all of them have been very helpful. The tips I received from them helped me play a lot better. It’s difficult to single out just one advice. Each one of them has given me the right advices at crucial junctures.

CC: You scored a match-winning 72 at No. 3 in the second innings against Australia on Test debut. Now that Rahul Dravid has retired and the slot is open, would the one-drop slot be your preferred place, if given a choice?

CP: I don’t mind batting at No.3. Right now, my aim is to play Test cricket on a regular basis for India. Also, I cannot be picky. I’ve basically been a top-order batsman but I’ve batted at various positions. Right now, I’d be happy to play at whichever position the team wants me to.

CC:  You were chosen to lead India in the Caribbean, ahead of some others in the team. Do you see this as a possible signal that the selectors could be viewing you as another candidate to groom for the job of India captaincy in the future?

CP: I don’t think I can comment on that right now. I still have a long way to go. My priority right now is to represent India on a consistent basis. Captaincy is too far away. I am not used to thinking that far. I’ve never been a person for making long-term plans. Also, we currently have a very fine captain in the form of Mahendra Singh Dhoni who’s been doing an excellent job since the last few years. So it’d be unrealistic of me to think that far.

CC: While just about everyone else around you failed with the bat, you were consistent in the West Indies. To what do you attribute the failures of some of India’s brightest hopes?

CP: I think a few players found it difficult to adjust to the conditions. It was a far cry from the conditions we’re used to in India. Also, the pitches in West Indies played a big role. The ball hardly came on to the bat; it often stopped on you. That was one of the reasons I feel that we weren’t as effective as we could have been.

CC: As a captain of that team, which players impressed you the most and who do you think are strong India material?

CP: I don’t think I can pick just a few and say ‘so-and-so’ is India material, because every player in the team chipped in at some point or the other. In the bowling department, Akshay Darekar and Shami Ahmed were very impressive. Their bowling performances are proof of that. I cannot comment on the batting department since almost everyone in the line-up has represented India at some point or the other. Every player in the team has his worth.

CC:  You spent a long time in the wilderness following your knee-injury a few months ago. How did you spend that time to stay focused?

CP: I underwent rehabilitation at the National Cricket Academy (NCA) in Bangalore and worked a lot on my fitness. Nevertheless, it was frustrating to stay out of the side and not get to play enough cricket during that time. But as a professional cricketer you have to be prepared for such things. Also, I spent a lot of time with my family and friends, something you can’t often do as a cricketer due to hectic schedules. That helped me de-stress.

CC: Was coming from a place like Saurashtra ever a handicap for you, unlike a player coming from say Mumbai, Delhi or Karnataka?

CP: I don’t think that was ever an issue. In fact, it motivated me more to make it big. There are plenty of domestic tournaments like the Ranji Trophy, Duleep Trophy, Vijay Hazare Trophy etc. where you get to compete with some of the best cricketers from across India. I always looked at it as a challenge. So personally speaking, it was never an issue for me that I came from a small town. But the only drawback I see is in the facilities as compared to the bigger cities. The facilities here are not really the best. Sometimes, we didn’t even have a turf wicket to play on. So if there’s any complaint, it’s the lack of basic facilities.

CC: If Tendulkar, Dravid and Laxman were the backbone of India’s past, then you, Virat Kohli and Rohit Sharma are seen as Indian middle-order’s Generation Next. Each one is in a class of his own, but how would you describe the three of you?

CP: To compare me with any of the mentioned players is a bit unfair. One just cannot be compared with Indian cricket’s greats like Tendulkar, Dravid and Laxman. What they’ve achieved is tremendous. It’d be an extraordinary feat to even get close to the number of runs Sachin and Rahul bhai have scored. But I will try and give my best when picked. My aim is to contribute to the success of this Indian team. Kohli and Rohit have already proved their worth and I’ll give my best shot whenever the opportunity arrives.

CC: The tour of South Africa was a tough one for you. The pace of Dale Steyn and Co. was too hot to handle for most Indian batsmen. What did you gain from that experience?

CP: You get to learn a lot from such tough tours. The conditions in South Africa are very challenging. The wickets there have plenty of bounce. I’ve played in Australia too, but unlike in South Africa, the ball comes onto the bat nicely. In South Africa you have to cope with that extra bounce. Moreover, Dale Steyn, Morne Morkel etc. form a dangerous pair. In fact, the South Africans currently have the best bowling attack in the world. But I did play a couple of good innings there too. Gary Kirsten was very helpful; so were the rest of the senior batsmen.

CC:  What are your memories of the triple century you scored against Orissa?

CP: That was a dream phase for me. I felt I was playing the best cricket of my life. I scored three triple-hundreds in under a month, and more importantly, I enjoyed my batting. That was a very memorable phase.

CC:  Any other innings close to your heart?

CP: The unbeaten 96 I scored against West Indies in the second innings of the first Test last month. That is an innings that is close to my heart. We were eight down for just 115 on the board while chasing a target of 188. I and Shami Ahmed put on a partnership without which we could have lost that Test. Staying unbeaten and contributing for my team’s cause was important, and that innings is one I’ll cherish for a long time to come.

CC: You’ve amassed considerable amount of runs at the domestic and A-team levels. Who do you attribute your success to?

CP: My dad. He’s been coaching me right since my childhood. Also, my Mom played a big role in my life. In life, your parents are everything. Nothing is possible without their support. My mom taught me the importance of being a good human being first. So credit goes to her, and also to my dad. He has been coaching me right from when I was just eight years old.

CP: I don’t idolise any cricketer in general. But there are three players I admire a lot. Rahul bhai, Sachin and Sourav Ganguly. I’ve watched these three legends since my childhood and they’ve influenced me a lot.

CC:  You’re often branded as a Test player. Does that bother you at all? You’ve not set the IPL stage on fire like a few of your other teammates. Do you think performance in the IPL is important?

CP: Of course, performance in the IPL is important. Some of the best players feature in it and you get to test yourself against them. Most people think I am a Test player but I’ve scored a lot of runs in the One-Day format as well. I’ve got a few opportunities in T20 but I know I didn’t make full use of them. However, I’ve learnt from my mistakes and can apply myself better hereafter. I believe I can play any format and adapt accordingly. 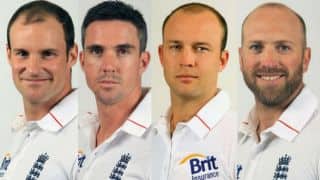 10 South Africans who have played for England