By profession Jon Filby is an Organisational and Management Consultant and the former ‘Head of People Development’ at London Underground.

Sussex County Cricket Club is arguably the oldest professional sports club of the world. Through its history it has been blessed by members and cricketers keen on preserving the history of the game. The memorabilia and artefacts associated with the Club are incredible. But much of it was dispersed in different places till very recently. Sussex Cricket Museum, set up in 2010, has gathered together many historic treasures to provide a dazzling display of cricket history, merging the hoary past of cricket with swanky modern audio-visual features.

Cricket Country (CC):  The Museum is quite a recent development if you consider the history of the Club.

We think that Sussex County Cricket Club is the oldest professional sports club in the world. We were founded in 1839, and when you think of it, none of the American sports clubs had started then and neither had the English ones. No soccer or rugby existed. MCC was founded earlier, but it’s not a professional club.

We have a huge collection of artefacts, and with the vagaries of the ownership of sports clubs, the Board of Sussex County Cricket Club thought it would be a good idea to put this collection into a Trust so that it would be owned by the Trust rather than by the County Cricket Club. Everything you see here is owned by the Trust and that includes items displayed in parts of the ground, in the Board Room, in the Long Room and elsewhere. All the historic artefacts are owned by the Trust and not by the County Club. READ: Interview: David Frith — The doyen of cricket writers

When the ground was redeveloped in 2011, this room where we are sitting now was destined to become a café. But they looked around the other facilities of the ground and said that actually there’s already quite a lot of café space, perhaps we could have it as a museum instead. All the white paint and all the lights were kitted out by the club at the time of the redevelopment of this ground. We moved in here during the 2012 season. And we have been here ever since.

CC: How was the collection assembled?

JF: When we arrived we had over 160 cardboard boxes of items that belonged to us, and a lot of framed items as well; we spent a year or two sorting them all out. The museum is entirely run by volunteers. I am Secretary of the Museum Trust. We have a curator, Rob Boddie, who has worked for Sussex County Cricket Club in voluntary capacity for well over 20 years. He’s been the curator of the collection and works on the design of the exhibits. We have a group of Trustees, three of whom are board members of the County Club. We have a solicitor, two museum experts, and a very enthusiastic collector in Nicholas Sharp who has the best collection of Sussex items, probably including the museum.

CC: Where was the collection before you got them here in cardboard boxes?

JF: It was in storage and all over the place.  Some were in the ground; some were taken home for safekeeping by the members and trustees. It was dispersed to the four winds, but it is all back here now. People had them in their houses — probably put them up in their wall for a while. But we have got all of it back.

CC: Have you managed to retrieve all the collection?

JF: There are one or two we are still tracking down, but we think we have everything that really matters.

CC: Is the cataloguing and the archiving complete?

JF: The project we are working on is the cataloguing. We don’t have a proper catalogue yet. We have a file for each of the players in the history of the Club. We keep track of the items related to each of the players, signed items, photographs and other items of interest. READ: Hampshire beat Warwickshire after being bowled out for 15

CC: The museum, I believe, is also hired for events.

JF: The space in the museum is also used for meetings and dinners. The kitchen is on the other side; the food is of a very high quality and when the table is set up it looks magnificent.

There are plenty of bookings. It is an unusual and quirky place. It is not always that you get a dining room that is also a museum, and people do quite like that.

CC: Could you take us on a brief tour of the museum?

JF (leads the way to a room and opens the keypad lock): This here is our archive room. In here we have a collection of books which includes a full set of Wisdens. The early ones are facsimiles but the rest of them are originals. Some of them are better than the others, but we have the complete set. We have the Lilywhite Companions, Lilywhite Annuals, the complete set of Playfair Annuals, Sussex cricket histories. There is a collection of books here, some of them related to general cricket and a large section relating specifically to Sussex cricket.

In these folders we have photographs of all the teams from 1867 onwards. We have scorecards, autographs, postcards. These are some Ranji books and postcards of Ranji.  Some of Duleep. Some are signed, some are not. READ: Interview: Neil Robinson — The Library and Research Manager at Lord’s

Sometimes these are taken out because they are lent to exhibitions.

It is a far from comprehensive collection, but some are rare and quite hard to find. We have early scorecards, interesting albums of various early ephemera. There is a window bill from 1833, there is one from 1837…

There is a collection of letters of Ranji, some even written in Hindi.

These are original scorecards from 1890 to 1914, usually with descriptions. All these are documented by Nicholas Sharp, a keen historian. READ: The Bradman Doors at The Oval

There are rare photographs, for example this one of George Parr’s team in 1859 to North America, with some good Sussex players in the side.

So, this is the type of thing we have in our collection, and only a fraction of it is in display.

CC:  There is a comprehensive Ranji collection!

JF: Apart from the pictures, books and memorabilia, the table where we were sitting at the start of the interview belonged to Ranji.  The story is that they were among his furniture at Norfolk Hotel. When he left in 1920 to return to India, the hotel rang the club to ask whether we would like the table and chairs. So you were sitting on one of his chairs. There are eight chairs and a table, creates a great context in the room. READ: WG Grace’s war of words with a cricket gossip columnist in 1882

(Leads the way back to the first room) In this part here we have some very interesting historical items. This is where you can view the quite excellent Ranji Installation Album from 1907. This is in essence a photo album of his of his coronation that he signed and donated to Sussex CCC at the time. We believe there is only one other copy in existence which is kept in Delhi.

CC: Would you say you were lucky to have so many people, right from the beginning, who were scrupulous about preserving mementos and memorabilia of the game?

JF: Indeed, we were lucky that even in the 1880s there were people who started collecting cricket memorabilia.

Some of the ephemera are pretty hard to find like this one about the Sussex County Cricket Club bazaar, the annuals of that era. That book there is from 1899: it celebrates 60 years of the Club. AD Taylor, known as ‘The Willow Wielder’, and AJ Gaston, who wrote History of Cricket in Sussex, were cricket historians. Men like Wisden and Lilywhite were also from here. So, Sussex has been lucky to have been not only the oldest club, but also in having people interested in the history of the game.

CC: You yourselves also brought out The Pictorial History of the Sussex County Cricket Club.

JF: Yes. Last year was the 175th anniversary and we published the book in a limited edition. We got it signed by all the living captains, 14 of them there. Dexter, Marlar, Parks — there are 750 different pictures, most of them from our archives and some from the collection of Nicholas Sharp. It has been very popular and sold out quite soon.

Now let us take accompany Jon Filby to look at the magnificent collection of the museum.

The Outer Room at the Sussex Cricket Museum

The Rear Room at the Sussex Cricket Museum

Treasures from the archives at the Sussex Cricket Museum 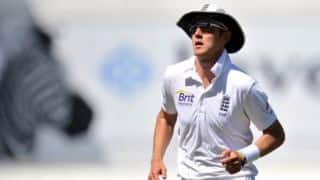 Ashes 2015: Stuart Broad will be key to England’s chances against Australia