V.Jayadevan, creator of the VJD system, points out glaring shortcomings of Wincoda 3.0, the latest version of the Duckworth-Lewis method. Jayadevan also speaks of his trials, tribulations, moments of ecstasy and depths of despair in an exclusive interview with CricketCountry s Arunabha Sengupta. 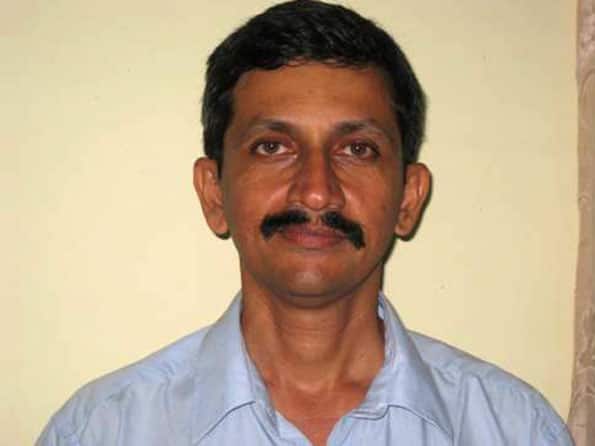 V Jayadevan, the 48-year old Civil Engineer from Thissur, known to the world as the creator of the VJD system for revising targets in limited over matches said, he is confident that his is the best available method in the world at present

V.Jayadevan, creator of the VJD system, points out glaring shortcomings of Wincoda 3.0, the latest version of the Duckworth-Lewis method. Jayadevan also speaks of his trials, tribulations, moments of ecstasy and depths of despair – in an exclusive interview with CricketCountry’s Arunabha Sengupta.

“I am confident that mine is the best available method in the world at present,” says V. Jayadevan, the 48-year old Civil Engineer from Thissur, known to the world as the creator of the VJD system for revising targets in limited over matches.

For a man who has invested a major part of his life in this pursuit, he sounds unusually upbeat while also expectedly enraged in the aftermath of International Cricket Council’s (ICC) announcement that they would stick to Duckworth-Lewis (D/L), with an evasive excuse that VJD offered no improvement.

“I am really unhappy about the neutrality of the evaluation conducted by ICC,” Jayadevan has written in his open letter to ICC president Sharad Pawar. But, although disappointed, he is far from abandoning his quest.

What has turned out to be mix of enduring passion and exasperating dead ends had started almost as a by-product of mundane professional work. Jayadevan, who works as the Deputy Director, Publications Division, in the Kerala Engineering Research Institute (KERI) in Peechi, Kerala, recalls the unusual beginning.

“In 1998, one of my colleagues requested me to help him in learning the programming language FORTRAN.  While teaching him, I took revising targets as a computational problem.  Later on, I read a report by Chetan Shah in The Hindu (March 13 and March 20, 1999) regarding the shortcomings of the D/L system. This led me to think about it seriously,” says V Jayadevan.

From that moment, it assumed the proportions of a crusade – filled with creative delight and disappointment of unreturned calls, unheard presentations and unexplained rejections. The entire journey has been traversed alone.

“Yes, I work alone.  The selection of matches for analysis has always been through my personal judgment. Generating the regression equations and careful curve fitting have also been done by me alone,” adds Jayadevan.

Cricket Country (CC): Is it true that initially you had received guidance from Frank Duckworth of the Duckworth-Lewis duo?

V Jayadevan (VJD): When Dr. Srinivas Bhogle first wrote an article comparing the two systems, he sent the draft to both the parties. Dr. Duckworth then reported two serious mistakes in my system.  I had to make some major changes to correct them and it took about two weeks. But, nobody helped me to correct these mistakes.

CC: Are those the same mistakes that Frank Duckworth mentions in the book, Duckworth Lewis – the method and the men behind it?

VJD: Yes, that was in the 2000 model. But, if you call that guidance, what would you call the dozens of mistakes that I have found in D/L? In that case, they should thank me for the many, many blunders I found in Wincoda 2.0. (Wincoda is the Windows version of the D/L software CODA – Cricket: One Day Analysis. The current version is 3.0)

CC: What’s the kind of support you received from Sunil Gavaskar?

VJD: I met Sunil Gavaskar for the first time in July 2000, when he invited me to present my system in front of a technical committee at Pune.  His first words to me when I arrived were, ‘Thank you very much for coming all the way here to attend this meeting. Have you had your lunch? At what time is your returning train? Based on that, we can schedule your presentation at the beginning or push it to the end.’ The kind of consideration he has given me in spite of his stature is beyond imagination. I have met him on three more occasions, and every time my respect for him has only increased. During the last meeting at Chennai, when he was about to leave, he called me personally and asked whether I had received my travel claims. He has replied to most of my letters. His reaction to the ICC decision also tells you of his support. He is a person who has really influenced me in my life.

CC: And how helpful has the Board of Control for Cricket in India (BCCI) been?

VJD: While rejecting the proposal in 2005, ICC suggested that I could try to use it in the Indian domestic matches.  My continuous efforts and Sunil Gavaskar’s support finally convinced the BCCI to use it. I don’t think I have got adequate support from the BCCI.  The biggest difficulty I have faced is in communication.  Very seldom do they reply to even for most genuine queries.  I can, in fact, write a book about my efforts to publicise the system and make the authorities take a look at it.

In stark contrast, ICC, especially (general manager) Mr. David Richardson, is very prompt in replying. Even when someone like Gavaskar has continued to show great interest, there has always been a clear lack of enthusiasm on the part of most of the BCCI officials.  But Mr. T.C. Mathew, the secretary of the Kerala Cricket Association and presently a working committee member, had really helped me in getting some financial assistance from the BCCI in 2010. I hope the recent developments will initiate a change in the attitude of the Board.

CC: So experiences with the ICC have been better…

VJD: It is only recently that I have started interacting directly with the ICC. Otherwise it had always been through the BCCI. I feel it is a lot easier to deal with the ICC because you get definite replies. Sometimes they may be negative, but David Richardson is very prompt in his responses, and has found time to give me some very detailed replies.

CC: In their book, both Frank Duckworth and Tony Lewis mention the difficulties of explaining complex mathematical and statistical concepts to the decision makers and the other members of the cricket world, who are not really deep into the world of figures. Have you also faced the same problem?

VJD: I have not used any great statistical tools in developing VJD.  It is just finding out the usual scores at the milestones I fixed, conducting regression analysis and fitting the right curve.  Commonsense and logic have played bigger roles. Some fine tuning was also carried out through trial and error. Again the plus point of my system that I always try to project is the reasonability of the targets set.  An experienced cricketer can feel this difference just by looking at these targets. One of the criticisms that D/L supporters voice about my system is that there is no scientific basis for it. But I defend my method saying that my results demonstrate that I am correct. Simple regression analysis has been adequate, and in spite of the complex mathematics, D/L does produce nonsensical results in many cases.

CC: What is your personal equation with Frank Duckworth and Tony Lewis?

VJD: I had a few e-mail exchanges with Dr. Frank Duckworth some eight years back. After that I have not had any direct contact with them.  I respect them as people who initiated revolutionary thinking in this area.  But my respect for them reduced considerably due to the lack of responsibility they showed by letting ICC use a dreadful product like Wincoda 2.0 for two years.

CC: About Wincoda 2.0 …  I believe you had pointed out many flaws of the version during the Hong Kong presentation. Do you believe they still exist in the new version of D/L, Wincoda 3.0?

VJD: In my Hong Kong presentation I demonstrated dozens of statistical and mathematical errors.  In fact, there should have been punishment meted out to them for making ICC use such an error-filled product for two years, a period including one World Cup. Many of those errors were rectified after I pointed them out. But, quite a few persist in Wincoda 3.0

CC: Could you tell us about G50 and what really happened to it? (For the definition of G50, please see the Glossary provided at the end of the article)

VJD: The D/L exponential fit may be a good mathematical concept, but the success of a model depends on how close it is to reality. The actual progress of a match is drastically different from what this model produces.  G50 was a concept introduced to reduce the ill effects of the statistical flaws in the model. However, it then introduced some serious mathematical errors.   The major difference in Wincoda 3.0 is the removal of G50. So, the serious mathematical flaws are now absent but the statistical errors have increased.

Following are examples of errors in Wincoda 3.0:

Fifty three is perhaps critical in the D/L model for the match situation of 20 overs bowled without the loss of a wicket.

For every run less than 53, the target gets reduced by almost three runs.

For every run scored above 53, the target increases by less than a run.

This is another statistical blunder.

Now let us see what happens when Team-1’s score is double of what we have been analysing, that is 106.

The targets when zero and two wickets are lost are 183 and 167 respectively.

CC: Do you think the exponential decay function of D/L works for T20?

VJD: As I showed in the example – it does not work for ODIs either at the moment.

Here’s a demonstration of the shortcomings of D/L in the T20 scenario:

Here, in some cases, par scores corresponding to higher scores are less than that for lower scores.

One might argue that these are rare situations, but the influence of this serious anomaly propagates to normal situations as well, even if they are not so glaring.

CC: In spite of these errors that you point out, the claims of your system have been ignored. What makes you stick to your quest?

VJD: I am confident that mine is the best available system in the world at the moment. If Duckworth and Lewis correct all their mistakes and make it at least equivalent to VJD, or someone else comes up with a better system, only then will I call it a day.

CC: Finally, how does your family react to your obsession with the rain rule?

VJD: I look into all my family matters with a good enough sense of responsibility. So there has been no problem so far.

Glossary: G50 – When the innings of Team 2 was interrupted, the revised target used to be derived by D/L using the scale down ratio (Resources available [overs and wickets] for Team 2)/ (Resources that were available to Team 1). However, if Team 1’s innings was curtailed, a similar scale up ratio was not used. The somewhat peculiar alternative invoked was called G50, average score in ODIs, which started with 225 and was later revised to 235.

(Arunabha Sengupta is trained from Indian Statistical Institute as a Statistician. He works as a Process Consultant, but purifies the soul through writing and cricket, often mixing the two into a cleansing cocktail. The author of three novels, he currently resides in the incredibly beautiful, but saD/Ly cricket-ignorant, country of Switzerland. You can know more about him from his author site, his cricket blogs and by following him on Twitter)

Also read: ICC’s inflexible attitude towards VJD is most disappointing