Mandeep Singh, the Rising Star of the Indian Premier League (IPL) 2012, has shown great promise with his precocious talent. Playing for the Kings XI Punjab, he was impressive, but it is his domestic record that also deserves the attention. In an exclusive interview with CricketCountry's Nishad Pai Vaidya, Mandeep talks about his experience in the IPL, his dream of playing for India and the importance of performing in the Ranji Trophy. 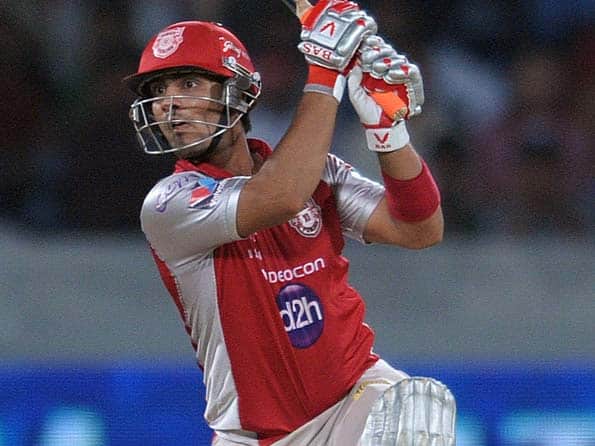 Mandeep Singh, the Rising Star of the Indian Premier League (IPL) 2012, has shown great promise with his precocious talent. Playing for the Kings XI Punjab, he was impressive, but it is his domestic record that also deserves the attention. In an exclusive interview with CricketCountry’s Nishad Pai Vaidya, Mandeep talks about his experience in the IPL, his dream of playing for India and the importance of performing in the Ranji Trophy.

CricketCounty (CC): An impressive performance in the IPL 2012 has put you in the limelight. You were also awarded the Rising Star of the competition. How much has life changed after it?

Mandeep Singh (MS): Not much has changed as awards are an added bonus. What matters the most was that I got a chance to bat at the top of the order for Kings XI Punjab. Playing against the likes of Morne Morkel, Dale Steyn etc. was a huge confidence boost for me. The whole experience has motivated me to perform better and I think the award is the icing on the cake.

CC: An injury to Adam Gilchrist and Paul Valthaty’s struggle prompted your promotion to the opening slot. It was a new experience as you aren’t a specialist opener. How did the move come about and was it difficult to adjust to it?

MS: I play fast bowlers well and you can say it is my strength. Since the last season, opening was in the plan and it almost happened. But, I dislocated a finger and Paul (Valthaty) got a chance and he performed brilliantly. I then went down the order and couldn’t play much. As a result, I didn’t have a very good season. It was a little difficult to adjust to the new role as I am not an opener. However, at the under-19 level I used to bat at No 3. Batting at one-drop, you are virtually an opener at times if a wicket falls early on. In the domestic one-dayers, I have played at No 3 a few times. My preparation was good and my role was to play freely. The aim was to get a good start in the initial overs and use the field-restrictions well.

CC: The most striking feature of your batting was that you maintained a good balance and a still head. Even while playing with the horizontal bat, you seemed comfortable. In the knock against Deccan Chargers, you played quite a few horizontal strokes. Did you work on that area especially?

MS: Since the last two years, I have been concentrating on this aspect of my game. When I spoke to Bhajji bhai (Harbhajan Singh) and Yuvi bhai (Yuvraj Singh), they told me that you do not get to play on the frontfoot too many times. So, I had to develop this area with practice. Nowadays, when anyone sees an Indian batsman, the first thing they try to do is bowl short. Vikram bhai (Vikram Rathour), who is the Punjab coach and the assistant coach at Kings XI Punjab, worked with me on the short ball in particular and guided me through. All that hard work paid off as I scored a lot of runs off the short ball.

CC: That knock of 75 against Deccan Chargers set up a huge score and helped Kings XI to a big win. Was that the best moment for you in the whole campaign or you would pick some other?

MS: Yes, it was the best moment. This is because I could execute my plans and played the innings I wanted to. Normally, I would get off to good starts, score the 20s and 30s and then get out. My aim was to play at least 15 to 16 overs so that I could take the team to a good score and get some for myself as well. In the last season, I remained unbeaten in a game against Kochi Tuskers Kerala and finished the game with David Hussey. That too was a memorable moment as the team won and I was unbeaten.

CC: Adam Gilchrist’s injury also meant that David Hussey had to take over the reins of captaincy. In fact, Hussey’s captaincy turned things around for Kings XI. How different are they in their leadership styles?

MS: Both are very similar in their styles as they back the youngsters a lot. They keep helping the youngsters especially in the nets where they give us a lot of tips on how to tackle particular situations. They keep encouraging us irrespective of the situations. If one player has a bad game, they would make sure he doesn’t lose his confidence. Both emphasise a lot on good practice and preparation. Hussey has been with me since my stint at the Kolkata Knight Riders (Mandeep played for KKR in the 2010 season). He knows my game well and whenever I would go to bat he keeps reminding importance of playing good cricketing shots.

CC: Kings XI had a tough time early on, but recovered and almost made it to the playoffs. What was it that changed everything and how was the atmosphere in the dressing room?

MS: We weren’t getting our combination right initially. However, once we found it, we improved. Azhar bhai’s (Azhar Mahmood) arrival gave us a lot of balance. My promotion also worked as we started getting good starts. Even when we were going through a tough phase, Gilchrist kept us going and told us that it was just the start of the tournament. Thus, the atmosphere was always positive and there was no negativity despite the defeats.

CC: Who was the toughest bowler you faced in the IPL? Dale Steyn, Morne Morkel, Sunil Narine?

CC: To what extent did net practice help. For example, facing Ryan Harris in the nets may have helped you adjust to pace.

MS: Playing in the nets is sometimes difficult as the bowlers keep bowling one after the other. If someone bowls a 150 kmph delivery in the nets, it is difficult to pick, but in match it is easier to adjust. I play a lot against the bowling machine with the rubber ball which comes on very fast.

CC: Your performance has brought you a lot of praise. What is the biggest compliment you have received?

MS: Hussey’s compliment was huge when he said at a presentation ceremony that I will play all the three formats. In fact, since the last year he has been telling me that I would play for India as I am technically correct.

CC: In the 2010 season, you played for KKR just after the under-19 world Cup. It wasn’t an easy transition as you didn’t have a good time. What advice would you give the under-19 players who would be making a transition to the IPL next year?

MS: When I played in the 2010 season, I think I was in a hurry to do things. I didn’t play to my strengths and I didn’t have a game plan as such. I took too much of the pressure as I thought it was the IPL T20, everybody is watching and I must hit. My advice would be that they must continue to play they do and back their strengths. For example, if get a short ball early on, I would hit it but if I don’t I will wait. You don’t have to panic. Some feel that 20 overs are less, but if you put your head down, you can score a 100.

CC: You said that you were initially overawed by the big stage. In the IPL, youngsters can get distracted or unnerved. How do you deal with the hype, excitement, distraction etc.?

MS: Quite a few people think that the IPL is the end; that is they aim to play there. However, whenever I get up in the morning to practice, the only thing that is in my mind is that I want to play for India – for a long time at that. This is what I always keep in mind. The IPL is good as it helps you share the stage with stars from around the globe. One must share experiences with them as you get to learn a lot. What the IPL does is that it helps you get used to the big stage. Thus, if one plays for India after playing the IPL, one wouldn’t be too nervous seeing the big crowd or a reputed bowler. However, as I said, IPL is not the end and my dream is to play for India, for at least 10 years. My focus on my dream is what keeps me going and shields me from the distractions.

CC: Tell us a bit about your background. We understand you are from Jalandhar and your father is an athletics coach.

MS: My father was a District Sports Officer and an athletics coach before that. He felt that he didn’t get what he deserved in his field and that is why he used to tell me become a doctor etc. When I was in 7th, I started playing and he had stopped me from going. Gradually, I started playing and by the time I was in 9th grade, I was in the Punjab under-15 side. I did well there and then got selected to the National Cricket Academy (NCA). So my coaches then told my father that I am good and shouldn’t leave playing. That is when he started supporting me. I then progressed through age group cricket and have a very good record there. I am playing the Ranji Trophy now and have a good record there as well. Although, some feel that you can play for India by performing in the IPL, but I feel the Ranji Trophy is the where one can make an impression. No doubt, the IPL gives you visibility, but ultimately one has to perform in Ranji.

CC: The India A call-up for the Caribbean didn’t come your way and you said you were disappointed. However, that team has names such as Cheteshwar Pujara, Rohit Sharma, Ajinkya Rahane, Manoj Tiwary. Seeing the competition, does it add to the pressure to perform?

MS: I felt it should have happened, but it didn’t. I had an injury and missed two Ranji games and maybe I lost out because of that as my aggregate suffered. It didn’t happen this time, no worries. I am hopeful for a call-up the next time. I am not thinking too much about it. As far as the competition is concerned, I do not think too much as they will play the best team available. My focus is on my performance that would help me achieve my dream.

CC: Sachin Tendulkar is your idol. Did you get a chance to talk to him? If yes, what tips did he give you for your batting?

MS: I haven’t got the chance to talk to him personally. However, just before we (India under-19) left for the World Cup (2010) in New Zealand, he addressed the whole team in Mumbai. He advised us on how to tackle the conditions in New Zealand, the movement and the pitches.