The former county cricketer explains why Jofra Archer bowls so fast with a basic run-up.

Ever-wondered how despite ambling in his run-up Jofra Archer generates the kind of pace that he does?

For that, you have to dig the mind of Steffan Jones, a former Derbyshire, Somerset, Kent and Northamptonshire player who played county cricket for almost 17 seasons. The 45-year-old is now a data-driven coach who worked with Archer at Rajasthan Royals in the IPL before the Barbadian made his international debut this year.

Jones has thrown his hat in the ring to be India‘s next bowling coach and for the same job at the National Cricket Academy (NCA). In an interview with Cricketcountry, he opened about various aspects of bowling, why he wants to be India’s coach and how Archer bowls so quick.

Your assessment of India’s current pace attack? Is it one of the strongest, if not the best?

I believe India’s pace attack at the moment is probably one of the strongest in the world. It’s got a great balance of pace, guile and skill. And also the ability to put some work in for lots of overs. So they are not shy of hard work, which is a great attitude for fast bowling. They have obviously got (Jasprit) Bumrah who has got a great pace.

(READ: Ishant Sharma reminds me of myself, says Jofra Archer)

Ishant (Sharma), he is probably in the form of his life. I helped him remotely. They have got (Mohammed) Shami, who bowls at a good pace, swings the ball. And then (Hardik) Pandya and (Navdeep) Saini as well, who is an exciting talent. So it’s a good time to get involved with India’s pace attack.

If appointed as India’s bowling coach, what changes or recommendations would you make?

What I would bring to it is probably the ability to differentiate between different methods that they need. Every bowler that I mentioned is different. For example, Bumrah is a very hip-dominant and tendon-driven bowler, so it is really essential that he doesn’t do too much weight training because his tendons will become more like pistons and not springs and he will lose the natural ability, the natural pace from his tendons and from the lever and the amount of force that he generates.

And then you have got Ishant, who is more knee-dominant. Weight training is an important factor in his performance but it’s having an understating of what needs to make a difference. Everyone has a limiting factor – everyone can improve the pace their own way whether that’s tactical, psychological or physical. And with physical, do they need more general strength or do they need more physical strength? It’s all encompassed in the approach to coaching. It’s called governing dynamics of coaching, having the knowledge to make an impact on the limiting factor of each bowler.

What are the factors that prompted you to apply for the job?

It’s time for me now to come to the global stage. I retired from professional cricket in 2011. It would have been an easy solution for me to go into country coaching and academy structure like a majority of people. I was the bowling coach of Derbyshire while I was playing. I have been there, I have done that.

I wanted to come out of the game and learn more about myself as a person myself as a coach. I travelled the globe, learning about javelin throwing, about pitching in baseball. I am going out to present to the Los Angeles Angels on pitching. So my work, after eight years of researching over 500 bowlers, is now well-respected and utilised in multi-million pounds sports like baseball and javelin. Some of the major techniques that they used are designed by me.

Not many fast bowling coaches in cricket can say they do that, so I know I am ready. I know what works for fast bowlers. I studied for eight to nine years. I know what the key performance indicators are. I know what the critical determinants of fast bowling are. So I can identify that. I can look at a bowler and (say) you need to work on that. I can provide the correct intervention method based on their limiting factors and based on whether they are hip or knee-dominant, muscle or tendon-driven.

It’s time now to have an impact on the global stage. I am ready for it. Hard work is in the DNA of Indian people and Indian fast bowlers and that’s why I would to work with India either with the men’s team or at the NCA. The NCA role would be about developing the future and the current players which would excite me massively.

Jofra Archer, who trained under you at Rajasthan Royals, seems to be a different bowler altogether. Just 10-15 steps in his run-up and boom, he bowls at a serious pace. What’s the science behind that?

Jofra Archer bowls quickly because of a few reasons. Even though he has got a short run-up, the efficiency of every stride that he has probably is equivalent to some other man running in from 50 meters that’s a long run-up. He gains the same momentum from the front foot contact as everyone else. Actually, you only need seven strides to achieve 70 percent of your max speed. So as long as you get seven good strides in that’s more than enough but that also depends on whether you are hip or knee dominant.

Knee-dominant bowlers will not need those long run-up because it’s about stability at the crease whereas hip-dominant bowler will need maximum momentum. Ball’s velocity is co-related with the height on the center of mass due to a stiff back-foot contact and the speed of the center of mass into front foot contact. Bumrah hits those perfectly, Jofra hits those perfectly. So Jofra would have a stiff back-foot contact that allows him to transfer momentum into a front-foot contact which is blocked. But if you notice on Jofra every stride he takes, he is pulling himself forward.

So he is not decelerating at any time. He is constantly pulling himself forward, pulling himself from the penultimate stride to the intro stride to back-foot to front-foot contact. He is a technically effective and efficient fast bowling machine and I am sure lot of people will copy it. Fast bowling is not about deceleration, it’s about accelerating through the crease and controlling the collision. Jofra Archer does it better than anyone else.

Based on last week’s performances, it’s going to be very close. It was great to see a Rajasthan Royals’ batsman (Steven Smith) do so well but equally good to see Rajasthan Royals Ben Stokes do so well. The next Test will more likely have more action. (Jos) Buttler, Stokes, Smith … it is a good testament of how good we coach them in IPL.

The IPL was like a preparation for the World Cup and the Ashes and I think the coaching staff needs to take some credit how we prepared them. Ashes prediction? Australia would win but it will be very, very close. 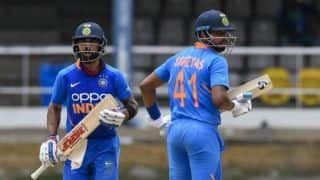 I want to stay in the team for a while: Shreyas Iyer 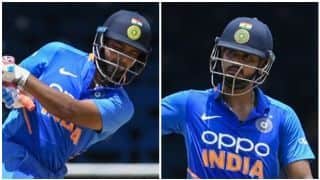 Sunil Gavaskar prefers Shreyas Iyer at No.4 over Rishabh Pant