Former Pakistan batsman feels that Junaid Khan, Mohammad Abbas would have been handy.

LONDON: An astute observer of cricket, former Pakistan batsman Bazid Khan, currently a commentator and TV analyst, closely followed Sarfaraz Ahmed‘s team at the ICC Cricket World Cup 2019. In his estimation, more than the loss to West Indies in Pakistan’s World Cup opener at Trent Bridge, it was the defeat to Australia three matches later that cost the team a spot in the semi-finals.

Bazid, who represented Pakistan in five ODIs and one Test, and now tipped in some circles to become the next chief selector of the Pakistan Cricket Board (PCB), spoke to CricketCountry after Pakistan’s elimination from the World Cup.

Are you disappointed or surprised by Pakistan’s performance in the World Cup?

To be honest, Pakistan fared better than what I had expected. Since the 2017 Champions Trophy, which we won, our record against the top six teams in ODI cricket is pretty bad. In the buildup to the World Cup, we were whitewashed 0-5 by Australia in a series where the selectors said they were experimenting, and then 0-4 to England. On the basis of these results, it did not look to me like Pakistan would finish in the top six at the World Cup.

The unfortunate aspect of Pakistan’s World Cup campaign was team selection. You’ve been preparing for this for four years. As soon as one World Cup ends you start to say you’re preparing for the next one. But despite all the preparation and planning, you couldn’t pick the right team for the first three or four matches. It took you a few games to get the right combinations, and when you managed to do that, you won four in a row and looked like a different team altogether. But it was too late.

The depressing thing is that you’ve prepared for four years for the World Cup, but then had to actually come to the World Cup and lose a few games to figure out your best combination. That is quite sad.

Overall if you see, Pakistan’s performance was pretty good considering what happened early in the tournament. You finished fifth out of ten teams, narrowly missing the semi-finals. But if you look at it closely, the disappointing aspect is that in the first few matches you didn’t give yourself the best chance.

What do you mean by selection mistakes?

You persisted with Shoaib Malik for a couple of games too long. What your combination should have been from the start, is playing Imad Wasim and Shadab Khan in every game. They are your strength. Imad should have been used more with the new ball, if you thought you were a fast bowler short. I don’t consider the West Indies game as your major loss, because it was Pakistan’s first game and West Indies played out of their skins and the conditions favoured them. Pakistan were just blown away.

But in the Australia game, you had things working in your favour. You won the toss on a dark and gloomy day, the pitch was offering a lot of swing and in the first 15-20 overs you lost the game. Why is that? Because you didn’t select the best team.

I understand that Shaheen Afridi is a young talent, he’s been in your plans for the World Cup, he’s one for the future. But he’s a teenager with just a few first-class games to his credit. And you sent back one of the bowler who in those conditions, I think, would have bowled even better than Amir – Junaid Khan.

That loss to Australia ultimately cost you a spot in the World Cup semi-finals, because after that loss, no matter what you did you could not recover. Pakistan could not have asked for better conditions to win the game. If you see that match, in the first 15 overs, apart from the cut and pull shots, you were not getting anything. That, for me, is very disappointing and that game actually showed you the what-ifs.

What if you had slightly got your selection right? If you had the option of Junaid or Mohammad Abbas, bowlers with more experience who could bowl in those conditions, you could have easily won the game. Yes, the batting collapsed, but letting Australia get to 307 on that Taunton pitch was really poor.

So whose fault is it?

It’s a collective failure. The captain, the coach, the selectors. The crescendo just evaporates. You say that you’re building up to the World Cup, you say that you’re checking combinations, you come to England for five ODIs just before the tournament. You may as well have shown up a day before the World Cup, because it took you three or four games to understand what you had available to pick from and who your best performers were. All your preparation didn’t count for anything.

(VIDEO: Arthur focuses on the positives as Pakistan narrowly miss out on semis)

Some players were experimented with, then discarded. Some where brought back after long gaps …

The fact is, we had a bowler like Usman Shinwari who did well very well in the last year, took a lot of wickets but wasn’t trusted in the World Cup. You played him for a year and a half and then dropped him. That’s an interesting case, for me.

What about Pakistan’s fielding in the World Cup? We saw so many dropped catches.

I’ve heard people say that Pakistan were unlucky in the World Cup. I consider us lucky to have finished fifth, despite having committed so many blunders in the field. The frustration lies in such areas, the poor fielding.

I think the selectors might venture into having him lead in one or two formats and getting in another captain for the one-dayers. I don’t think they will totally remove him from the captaincy.

The interesting thing for me is what the PCB does with the coaching staff. In my opinion, Arthur has done really well with whatever resources he has. Things could have been done differently, and I think it’s time to move onto someone fresher because actually Arthur hasn’t worked. Pakistan haven’t qualified for the World Cup semi-finals. The bottom line is that this is the biggest tournament.

If you don’t get into the top four then you have to reassess everything and make changes. You need fresher ideas and fresher minds to build towards the next World Cup, because from now that’s what it is – building to the next World Cup.

What are the positives from Pakistan’s World Cup campaign?

Shaheen Afridi is a big positive. He’s got a future ahead. Everyone knows how good Babar Azam is. But the problem with so many talented Pakistan players down the years is that they have not progressed. Countless players have started off well but not reached the level you thought they would. I think Babar has progressed, and he’s the one player who has really enjoyed Mickey Arthur’s coaching and support. I think he’s flourished under Arthur.

So if, for instance, Arthur goes, the only thing I would be worried about is Babar. Because Babar, under Arthur, has been very, very comfortable. 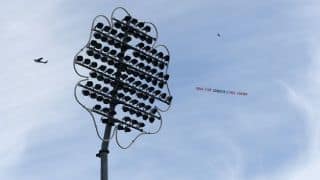