Dube says that he expected to play for an IPL franchise next year, but not foresee such a price tag attached to his name.

Mumbai allrounder Shivam Dubey sounded the right alarm ahead of the Indian Premier League auctions when he smoked five sixes in five deliveries against Baroda in a Ranji Trophy 2018-19 match on Monday. It appears like the IPL franchise owners were well-aware of Dubey’s hard-hitting prowess which was responsible for triggering an intense bidding war at the 2019 IPL player auction in Jaipur on Tuesday.

Delhi Capitals and Royal Challengers Bangalore first set out for Dubey’s services before Mumbai Indians entered the bidding war at Rs 1.20 crore. Mumbai and RCB chased him until Kings XI Punjab joined the fray with a bid of Rs 4 crore. However, RCB held on to their man with a winning bid of Rs 5 crore, making Dubey the costliest uncapped purchase of the auction.

Back home at the Sher-e-Punjab colony in Andheri East, the Dubey household was eagerly watching the action roll out on television. “My whole family was glued to the screen. The house was filled with family and friends,” he told CricketCountry on Tuesday.

Dubey, who first hogged the limelight with his belligerent knocks in the T20 Mumbai Premier League where he smashed five sixes in an over, has scored 489 runs in the Ranji Trophy this season – decorated with two centuries and three fifties – and picked up 17 scalps in five matches.

With such impressive knocks under his belt, an IPL call was just on the horizon.

“I expected an IPL team would pick me but did not expect so much coming my way. Playing in the Ranji Trophy and T20 Mumbai Premier League has helped me reach the stage I am now. Besides, I have also improved on my fitness as I realised that being an allrounder, I can’t afford to be out of shape,” said Dubey, who was sold for Rs 5 lakh to Shivaji Park Lions (Mumbai South Central) in the T20 Mumbai Premier League, added.

The excitement in Dubey, who made his first-class debut last year, was palpable and understandably so after having gone unsold in the auctions last season. “It’s going to be great ride with RCB. I am very excited because I am going to be playing under Virat Kohli sir. Till then I am just trying to be more fit and will look forward to contribute more to my team,” Dubey said.

Dubey, whose strike-rate in T20s is an exceptional 147.65, wants to learn how to be more consistent from Kohli. “Obviously, Virat sir is one of the legends right now. I want to learn from him on how to keep consistently performing,” he said.

However, before he gets into T20 mode, Dubey has got a major task on his hand – to resurrect 41-time Ranji champions Mumbai – in desperate need of a win to progress to the knockouts. “I’m not thinking about the IPL now. All that is on my mind is the Ranji Trophy. After I finish with the tournament, I will start concentrating totally on the IPL,” he said. 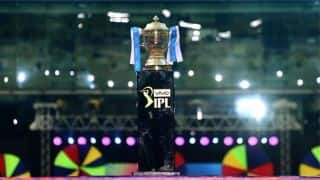 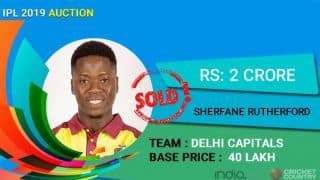