On May 2, 2002, Inzamam-ul-Haq became the second Pakistani batsman to score a 300 in Tests. The knock of 329, that included 38 boundaries and 9 sixes, put the sturdy batsman eight short of Hanif Mohammad’s world record. Pakistan inflicted the fifth-biggest defeat on New Zealand in that Test, winning by a margin of an innings and 324 runs. Karthik Parimal looks back at that momentous occasion for the big man. Inzamam-ul-Haq scored 329 a score that was compiled in over nine-and-a-half hours, inclusive of 38 fours and nine sixes. Sadly, he fell short of Hanif Mohammad’s record by eight runs © Getty Images

On May 2, 2002, Inzamam-ul-Haq became the second Pakistani batsman to score a 300 in Tests. The knock of 329, that included 38 boundaries and 9 sixes, put the sturdy batsman eight short of Hanif Mohammad’s world record. Pakistan inflicted the fifth-biggest defeat on New Zealand in that Test, winning by a margin of an innings and 324 runs. Karthik Parimal looks back at that momentous occasion for the big man.

The New Zealanders have seldom been happy campers in Pakistan. In 21 Tests, they’ve been at the losing end on 13 occasions, winning just twice and holding on to a draw six times. In the summer of 2002, when they stopped for a short tour of two Tests, at Lahore and Karachi, chances of reversal of tide appeared bleak considering the frailty of the line-up. On the other hand, Pakistan boasted some of the best names in its ranks who were certainly a force to reckon with at home, having won six of their eight games in the last one year. The contest was a mismatch and this became evident from the outset.

Having opted to bat first, the hosts lost two quick wickets in the form of Shahid Afridi and Younis Khan for little on the board. However, that was to be the only source of joy for the Kiwi bowlers, for the next few hours, as they were made to toil, and the efforts often yielded nothing. Imran Nazir and Inzamam-ul-Haq scored at a brisk pace, demoralising the bowlers who, sapped physically by the sweltering heat, further became demoralised. Captain Stephen Fleming’s constant rotation of bowlers too proved to be futile.

The duo remained unconquered for almost two sessions, with 20-year-old Nazir plundering a hapless Kiwi attack at will. In 171 deliveries, he had made 127, during the course of which 18 fours and three sixes had been collected. It took a stupendous effort from Mark Richardson to dismiss the flamboyant batsman, but by then Pakistan were comfortably perched at 261 for three, Inzamam batting on 98. The latter remained unflustered by the fall of wicket, and considering his poor run of form prior to this series, did well to ensure there was no break in momentum despite Nazir’s exit.

A thunderous pull off left-arm spinner Daniel Vettori through the mid-wicket region helped him reach the coveted three-figure mark, but little did one know that the knock was far from complete. As Fleming tossed the new ball to his troop, Inzamam, and his partner at the other end Yousuf Yohana (now Mohammad Yousuf), led a carnage — albeit mostly the runs flew from the former’s willow. In 10 overs, the two smashed 66 runs, with Yousuf succumbing just two balls before stumps. Pakistan finished the day at an incredible 355 for four, with Inzamam unbeaten on a staggering 159. His scamper from 100 to 150 more than made up for a slow start to the innings.

After notching his 16th ton in 81 Tests, Inzamam proceeded towards pocketing a double century, the second of his Test career. Stifled by some accurate bowling, he held his nerve and played out the tough phase, before nonchalantly moving into his zone of familiarity. Steadily, he trudged towards 200 and despite the fall of two more wickets at the other end, went to lunch still to be conquered on 211. During the second session, owing to the merciless heat, his fitness became a cause for concern. Cramps in his legs hampered him and he duly asked for a runner. However, Fleming bluntly refused, and there was little the umpires could do if the opposition captain was against allowing one.

Nonetheless, Inzamam carried on and he found able, willing partners in Saqlain Mushtaq and Shoaib Akhtar. As he moved ahead, Saleem Malik’s 237, Wasim Akram’s unbeaten 257, Zaheer Abbas’ 274 and Javed Miandad’s 280, had all been shadowed. He was now approaching a triple-century and only Hanif Mohammad’s 337 was to be overtaken to become Pakistan’s highest-scorer. With sweat dripping across his weather-beaten face, limping, he played Chris Harris towards the backward point in 153rd over to become the second Pakistani batsman to reach a score of over 300. Waving his bat, his joy knew no bounds.

Running out of partners at the other end, he decided to accumulate runs henceforth only through boundaries, for running, especially with the cramps and weariness, was out of the equation. The next nine deliveries yielded 27 runs, inclusive of three sixes in four balls off leg-spinner Brooke Walker. In an attempt to go for the fourth one, he holed out to Daryl Tuffey at deep mid-on, thereby ending his innings on a magnificent 329 — a score that was compiled in over nine-and-a-half hours, inclusive of 38 fours and nine sixes. Sadly, he fell short of Hanif Mohammad’s record by eight runs.  The total that stared at New Zealand was a daunting 643.

Riding on Shoaib Akhtar’s brilliant spell of six for 11, and Danish Kaneria’s five for 110, Pakistan bowled the Kiwis out for 73 in the first dig, followed by 246 in the second, thereby winning the Lahore Test by a massive margin of an innings and 324 runs — fifth-biggest in the history of cricket. Two brilliant performances were pitted against each other, but in the end, Inzamam, deservedly, walked away with the man-of-the-match award. 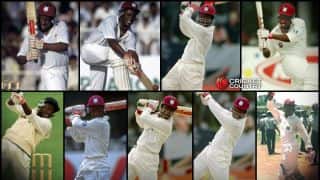