Inzamam-ul-Haq finds another way to get out; this time crashes to stumps

Inzamam-ul-Haq finds another way to get out; this time crashes to stumps

Inzamam was seen walking out rubbing his chest in discomfort as the Headingley crowd chanted, “You fell over.” Can’t blame them, they weren’t wrong!

Inzamam-ul-Haq undoubtedly is one of Pakistan’s greatest batsmen and when in flow, his outings were a treat to eyes. Thanks to YouTube, we can keep watching those delightful strokes that he played throughout his illustrious career.

However, Inzamam is YouTube favourite for another reason. Throughout his career, he has found out comical and the most unusual way to get dismissed. Be it his bizarre dismissals (which includes a list of run outs, where his partners too got dismissed several times) or his innocently spoken unintended but hilarious interviews, fans never get tired of typing ‘Inzamam’ in their search bars.

In 2005-06 season, Inzamam had already been dismissed in the most unusual way on two occasions but this beats all. It was the fourth Test of Pakistan’s tour to England in 2006 at Leeds, Inzamam batting on 26, tried to sweep a Monty Panesar ball. He lost his balance and dived over the stumps. He almost managed to hurdle them but unfortunately his belly flicked it. Lucky for England wicket-keeper Chris Read that the big Inzamam didn’t crash on to him.

Inzamam was seen walking out rubbing his chest in discomfort as the Headingley crowd chanted, “You fell over.” Can’t blame them, they weren’t wrong!

Last week in India’s final Test against Australia at Sydney, Indian batsman Rohit Sharma, who has often drawn comparison with Inzamam for his lazy elegance, almost found himself in a similar situation when he tried to sweep Australian spinner Nathan Lyon. Rohit, too lost his balance and fell down. 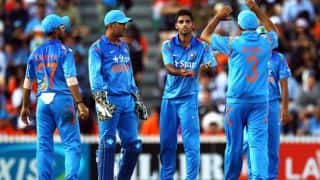