Inzamam-ul-Haq’s batting was about lazy elegance. Despite lacking an athlete’s body, Inzamam was a dexterous destroyer with the bat in a career spanning 15 years during which time he went on to become Pakistan’s leading run scorer in One-Day Internationals (ODIs) and second highest run-getter after in Tests after Javed Miandad. 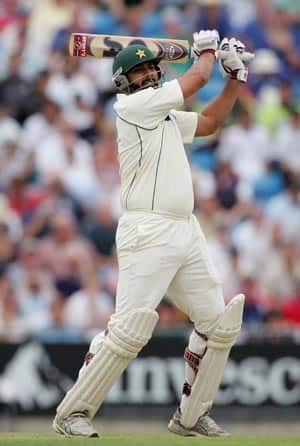 Inzamam-ul-Haq’s batting was about lazy elegance. Despite lacking an athlete’s body, Inzamam was a dexterous destroyer with the bat in a career spanning 15 years during which time he went on to become Pakistan’s leading run scorer in One-Day Internationals (ODIs) and second highest run-getter after in Tests after Javed Miandad.

Inzamam was an unknown 22 when Imran Khan handpicked him for the 1992 World Cup. The Pakistan captain kept his faith in him and persisted with him throughout the tournament. Inzamam batted at various positions and different situations without doing much. But Imran’s faith in Inzamam bore fruits in the semi-final clash against New Zealand.

Pakistan were in soup when Inzamam walked out to bat. There was immense pressure. Pakistan had never entered the final of a World Cup before and the target was not an easy one by 1992 standards. Yet, Inzamam played a blinder. His 37-ball 60 propelled his side and helped them sail through to the final. He followed that up with a quintessential knock of 42 in the final, which included a partnership of 34 runs with skipper Imran for the fourth wicket ,and a 52-run stand with Wasim Akram for the sixth wicket. These important partnerships towards the end helped Pakistan post a good total of 249 and eventually give Imran his first World Cup win. Later on, Imran had gone on to say that Inzamam was the best player of fast bowling in the world.

In the scorching heat of Lahore during the summer of 2001, Inzamam pumelled the Kiwi bowlers to score 329 — his highest score in Tests. It became the second highest score by a Pakistani and tenth highest by any batsmen in the World. His efforts helped his team pile on a huge first innings total and register a massive victory by innings and 324 runs.

The knock was one that Pakistani supporters had not even dreamt of witnessing since Javed Miandad’s retirement. Inzamam spent close 10 hours on the pitch and laced his knock with as many as 38 boundaries and nine sixes.

He went through woeful form following that knock and had a forgettable outing in the 2003 World Cup, but he signaled his return with a wonderful 138 against Bangladesh at Multan. The match-winning knock had the perfect amount of controlled aggression that saw his side save themselves from the embarrassment of losing to Test minnows Bangladesh at home in Multan.

Inzamam was a thinking captain. He led his side from the front and commanded respect from his team. He was a leader of men and often led inexperienced line-ups to great success. There was nothing tentative about Inzamam. He may not have shown even half the emotions as his contemporaries did, but he was very effective in his quiet ways.

Given his built, Inzamam was never going to be a great runner. Early on in his career, he was involved in perhaps the most astonishing run out in the history of the game. A mid pitch hesitation led the point fielder Jonty Rhodes to run in, pick up the ball, dive parallel to the ground the ground and crash into the stumps with  the ball. He probably could do nothing in that situation, not even the fastest of the runners could have. But Inzamam built a reputation of being one of the slowest runners and has also been accused of running his partners out on multiple occasions.

He was also in the news for all the wrong reasons when he was angered by a fan who invited his wrath by taking digs at his stocky build. This happened when he was walking back after his dismissal. The comment only added to the frustration and Inzamam showed his anguish. He had to be stopped by the deep fielders from hitting the fan with his bat as he raised it and pointed it towards the offender.

He was a calm and composed man carrying out his duties in the most efficient manner until the ill-fated game against England at The Oval happened that left a permanent stain on his otherwise sparkling curriculum vitae as captain.

After the on field umpires accused the team of ball tampering, Inzamam marched his team off the field. There was a lot drama before the visitors eventually forfeited the game. His act was lauded in his home country as it was looked at as an emotional move; one that kept the country’s reputation and pride intact. In the cricketing fraternity, however, that move is still frowned upon.

Inzamam-ul-Haq was undoubtedly one of the best batsmen to have graced the game and his side were blessed to have such a level-headed man to lead them for five years between 2003 and 2007.

He was recently the batting consultant of Pakistan team that travelled to India towards the end of 2012.

Inzamam was truly a giant of Pakistan cricket – literally and figuratively.