The match headed to a tense finish, but Mumbai were favourites to win.

Rohit Sharma may have done wonders for the Mumbai Indians in the Indian Premier League (IPL), but once upon a time, the Mumbai-based cricketer used to be a tormentor for them. In the IPL 2009 match played at Centurion, Rohit took a hat-trick and also scored 38 crucial runs to help his side Deccan Chargers beat Mumbai Indians by 19 runs. Devarchit Varma revisits the match…

Rohit Sharma has won an IPL and a Champions League T20 tournament for the Mumbai Indians (MI) as their captain. But not long ago, Rohit was one of the toughest challengers in front of Mumbai. In one of such instances, during an IPL league match played at the SuperSport Park in Centurion on May 6, 2009, Rohit’s all-round show helped Deccan Chargers (DC) thrash a star-studded Mumbai Indians by 19 runs. This was the edition in which Deccan were in full flow and also went on to win the tournament.

In the 32nd match of the IPL 2009, Deccan captain Adam Gilchrist won the toss and elected to bat. The start was a disappointing one for them as Herschelle Gibbs was removed in the second over, and their No 3 batsman Tirumalsetti Suman too failed to build on a good start and was out for 20. Rohit walked in to bat at No 4 and it was crucial for him to stay at the wicket. The right-handed batsman did not disappoint as he scored 38 valuable runs for his side off 36 balls, which included two fours and a six. Rohit in a way dropped the anchor as Deccan’s innings was build around his innings, and he was even the top-scorer for them. Deccan posted a respectable total of 145 for six after their allotted 20 overs.

To get the better of a line-up that Mumbai Indians had – consisting the likes of Sachin Tendulkar and Sanath Jayasuriya – Deccan needed an inspired bowling performance. Deccan did well to reduce Mumbai to 7/2, removing both the legendary batsmen. Pinal Shah and JP Duminy then got together to take Mumbai ahead, and they added 53 runs for the third wicket to lead Mumbai’s recovery.

Suman broke the stubborn stand in the ninth over, but the job was far from done from Deccan’s perspective. Dwayne Bravo was the new man in and he could hit big strokes. While the Caribbean batsman did not score heavily, but his vital fourth-wicket 37-run stand with Duminy once again pushed Deccan on back foot. Mumbai were cruising comfortably, and Deccan needed some sort of magic to deny their opponents a win.

Suman once again struck to dismiss Bravo, and Abhishek Nayar walked in with Mumbai needing another 49 runs to win from more than four overs. The match headed towards a tense finish, yet Mumbai were the favourites to win. This is when Adam Gilchrist, the Deccan captain thought about giving the ball to Rohit, who could come in handy with his off-spin.

Rohit came onto bowl the 16th over of the match, and on the penultimate ball of the over he cleaned up Nayar for one. Deccan sensed opportunity and they aimed to capitalise on the end that opened for them. Harbhajan Singh too could hit big strokes, and in audacious manner, he went to sweep the final ball from Rohit outside the off-stump. Unfortunately for Harbhajan and Mumbai, the ball hit the inside edge of the bat and crashed into the wickets. Rohit had two in two and Deccan were in complete command now.

The next over was again by Suman who had claimed two wickets earlier in the game. Pressure was mounting on Mumbai, and five runs off Suman in the 17th did not help their cause at all. Duminy had meanwhile completed his half-century and all eyes were pinned on him, as he was the only hope for Mumbai to win this tie for them.

On the other hand, Rohit was on a hat-trick chance now. Coming on to bowl the 18th over of the match, he sent one very straight towards Duminy’s leg-stump. The batsman tried to shift back a little and play it on the leg, but got an inside edge and Gilchrist did the rest. The entire stadium was jubilant and so were the Deccan Chargers and Rohit. Apart from the fact that it was the fourth instance when a hat-trick was registered in an IPL match, it was also great for Deccan that Duminy was back in the hut.

If at all there were any hopes left in the Mumbai camp after that magical spell by Rohit, they were soon dashed by the part-time off-spinner, who removed the dangerous Saurabh Tiwary on the third ball of the over. Rohit was ecstatic and so were the Deccan Chargers. They were all set to register a memorable win.

Mumbai could never recover from those blows and the collapse resulted in a 19-run loss. Rohit, for his fine all-round show was named Man of the Match. He returned with the figures of 2-0-6-4. 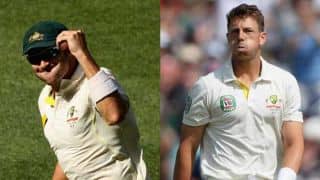 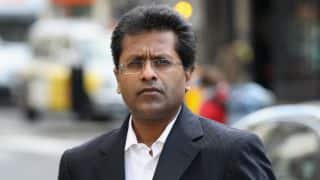