Rajasthan and Bangalore are winless and need wins to stay in contention for the playoffs.

Game 14 of the 2019 IPL sees Rajasthan Royals meet Royal Challengers Bangalore in Jaipur on Monday in a clash of the only winless teams this season.

Much was expected from RCB and Rajasthan after they made some good – on paper, at least – purchases at December’s IPL player auction. But the fortunes of both franchises have not gone to plan and now they are nearing the point where each match will become a must-win.

Virat Kohli s RCB lost to Chennai by eight wickets, to Mumbai Indians by six runs and Hyderabad by 118 runs.

Mumbai Indians have two points from three games to sit at sixth place, whereas all other teams have at least four points.

Rajasthan, since they won the inaugural IPL in 2008 under Shane Warne, have never reached the final again. Bangalore have made the IPL final thrice – in 2009, 2011 and 2016 – but never lifted the trophy. (VIDEO: Rajasthan meet Bangalore in search of first IPL win)

The closest that Rajasthan have come to the final is in 2013 when they finished third. Under Rahane in 2018, Rajasthan had a stop-start IPL campaign in which they lost a few games before winning some to stay in contention for the play-offs. They sealed their progressed after beating Bangalore in the last league game, but once their in-form opener Jos Buttler departed for England the team lost steam. Rajasthan were eliminated in the playoffs by Kolkata Knight Riders.

In 2016, inspired by Kohli’s record-setting batting, RCB stormed to the final where they came undone against winners Sunrisers Hyderabad. In 2017, RCB finished last of all teams and in 2018 improved to finish sixth on the leaderboard. (READ: One of our worst losses ever: Virat Kohli)

Last season, the franchise won just three of their first ten games. A late surge saw RCB win three matches in a row before they lost to Rajasthan in their final fixture.

The record for the worst start to any IPL season belongs to Deccan Chargers, Delhi Daredevils and Mumbai – five losses in a row.

In the 2012 edition, Deccan lost their first five matches. Their sixth was abandoned, and they managed to get their first win in the seventh.

A year later, Daredevils were beaten in five straight games, including in the Super Over.

In 2014, Mumbai lost five in a row but recovered strongly to finish fourth on the points table. They made the playoffs and lost to CSK in the Eliminator.

In 2015, Mumbai lost their first four matches but when scripted a stunning turnaround to storm into the playoffs and eventually win the IPL trophy.

In the first IPL in 2008, Chargers lost their first three games and eventually ended as wooden-spoon holders with two wins from 12 games.

In 2010, Punjab also lost their first three matches. Their fourth ended in a tie, after which KXIP beat Chennai in the Super Over. They lost four in a row after that and ended the season with four wins from 14 games.

Down 0-3, which of Rajasthan and Bangalore will emerged with their first points in IPL 2019? 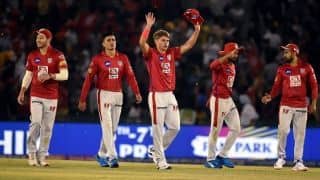