On April 22, 2011 the Eden Gardens was dumbfounded. Chris Gayle announced his arrival with a century against his erstwhile franchise Kolkata Knight Riders. The target of 172 looked imposing for Bangalore at the half-way stage. But Gayle’s sortie spoiled the party for Kolkata. Sarang Bhalerao revisits Gayle’s exhibition of power hitting. 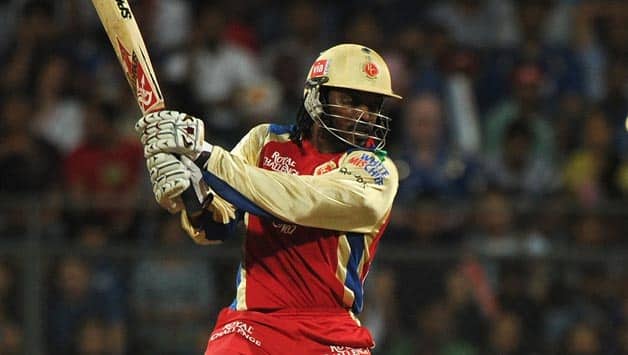 In his brutal knock of 102 from 55 deliveries, Chris Gayle wreaked havoc in the minds of Kolkata bolwers © AFP

On April 22, 2011 the Eden Gardens was dumbfounded. Chris Gayle announced his arrival with a century against his erstwhile franchise Kolkata Knight Riders. The target of 172 looked imposing for Bangalore at the half-way stage. But Gayle’s sortie spoiled the party for Kolkata. Sarang Bhalerao revisits Gayle’s exhibition of power hitting.

Chris Gayle looks like a heavyweight pugilist raring to flatten his opponent. When in full flow, Gayle makes the distance between him and the boundary look shorter. He forces a school of thought that  umpire need to wear helmets. When he is in the mood to savage bowler – which is often — six-balls in an over may well seem way too many for those at the receiving end.

Yet, somehow before the start of the 2011 Indian Premier League (IPL), there were no buyers for Chris Gayle! In hindsight the owners who underestimated Gayle’s utility in the team might lock themselves in a room and shed a tear or two.

The Eden Gardens was houseful on this day in April 2011. The decibel levels were soaring after the home side scored 171 in their 20 overs. At the half way stage, Kolkata fancied their chances, albeit the wicket was on the slower side.

Gayle opened with Tillakaratne Dilshan. Gayle quietly played out couple of overs. He was assessing the pace of the wicket. There was momentary lull before the onset of the carnage. Gayle sneeringly thumped Jayadev Unadkat over wide long-on for a six. It was akin to a lightening punch in a boxing bout. The opponents were caught unaware. Were the signs looking ominous for the home team? The plunder had just started.

Shakib-al-Hasan discovered why bowling to Gayle isn’t fun. In his second over, Gayle launched a brutal assault on the Bangladeshi spinner. The Kolkata crowd at deep mid-wicket and deep square-leg ran for cover as missiles flew in their direction. All of a sudden Kolkata’s bowling lacked  penetration. There was no ‘go-to’ man. Gambhir had shockingly dropped Brett Lee in favour of spinners, who the captain thought would do the job for him on the slow Eden surface.

Gayle helped himself to 14 runs off the ninth over of the innings when he outwit Yusuf Pathan. The Kolkata all-rounder found Gayle’s brutality too hot to handle. A couple of short deliveries to Gayle might not have been intended, but they just came out wrongly off the hand. The reason was simple: Gayle had wreaked havoc in the minds of Kolkata bolwers.

Gambhir introduced part time leg-spinner Manoj Tiwary into the attack in the 11th over. But Gayle proved how bad that move was by welcoming Tiwary with couple of sixes. Bowler Rajat Bhatia was not giving much pace to his deliveries, but Gayle was giving the pace back to the ball. He contemptuously thwacked Bhatia over deep square leg for a six and nearly killed Dilshan with a thumping straight drive.

Gayle got Bangalore to the target single-handedly. After 18 overs, Bangalore needed one to win and Gayle needed two for his century. Gayle smashed the first ball of the 19th over covers on one leg for a boundary. That was his 10th boundary of the innings and the 55-ball essay had produced 102 runs. The seven sixes hit exemplified his raw power.

At the post-match presentation Gayle said: “I think the crowd enjoyed the big sixes, I get cussed a lot when I don’t get them.” Now you know the reason why this big West Indian is a big phenomenon in India.