DC would have regretted letting go a few class players in this year's Indian Premier League (IPL). Such absurd moves have cost the team dearly. Not just DC, there are quite a few other teams that would have repented trading a few of their players. This article focuses on transfers some of the franchises should have refrained from making. Not a surprise then that most of these transfers involves Deccan Chargers. 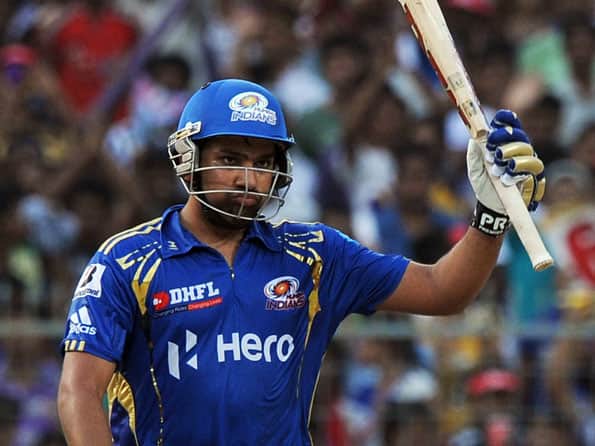 Rohit Sharma single-handedly steered Deccan Chargers to victory on multiple occasions. This year, he represented the Mumbai Indians, and eventually went on to become their highest run-scorer. This is one transfer that’s difficult to fathom © AFP

This year’s Indian Premier League (IPL) was a showstopper. There was not much to choose between the top seven teams that fought it out almost till the last match of the league stage. Most of these teams looked balanced, whereas few others like the Deccan Chargers (DC) and Pune Warriors India (PWI) looked a slightly depleted unit. However, DC would have regretted letting go a few class players. Such absurd moves have cost the team dearly. Not just DC, there are quite a few other teams that would have repented trading a few of their players. This article focuses on transfers some of the franchises should have refrained from making. Not a surprise then that most of these transfers involves Deccan Chargers.

Rohit Sharma played a significant role in DC’s batting line-up during the first three editions of the IPL. He single-handedly steered them to a victory on multiple occasions. Apart from Adam Gilchrist and Sharma, the rest of Hyderabad’s batting unit looked quite fragile. Together, they injected the much-needed stability. Sharma scored 404, 362 and 404 runs in the first three seasons of the IPL respectively. He was next only to Andrew Symonds in the list of leading run-getters for DC during IPL 2008.

This year, he represented the Mumbai Indians, and eventually went on to become their highest run-scorer. He scored 433 runs at an average of 30.92, inclusive of a century and three half-centuries. Moreover, he was the one who guided them to a victory in a closely-contested game against his former team DC.

This is one transfer that’s difficult to fathom.

Vijay Mallya, the owner of Royal Challengers of Bangalore (RCB), admitted that the two players he felt he shouldn’t have let go of were Jacques Kallis and Dale Steyn. Kallis was an integral part of RCB’s setup before they decided to infuse young blood. He was instantly picked up by the Kolkata Knight Riders (KKR) thereafter; and that move ultimately paid rich dividends. Kallis became the second highest run-getter for KKR after skipper Gautam Gambhir, and also the second highest wicket-taker after mystery spinner Sunil Narine.

Had RCB retained Kallis, his experience would have helped a long way for the side to at least qualify for the playoffs. Their bowling would have been stronger, and the batting unit need not have feared even if Chris Gayle and Virat Kohli failed.

Probably the only good move made by DC since the last couple of seasons. Dale Steyn was the lone fighter in DC’s bowling line-up. Without him, their bowling attack would have been one of the most fragile ever. Not many can forget his fiery spell to dismiss Chris Gayle and bundle out RCB from the tournament, even when defending a modest total.

Like mentioned, RCB’s profligate bowling would have needed someone like Dale Steyn in their attack. Bowling did cost them quite a few matches and also a berth in the playoffs. RCB did well to strengthen its batting, but turned a deaf ear to their bowling needs.

Steyn was the highest wicket-taker for DC this season, taking 18 wickets at an average of just 15.83.

Pragyan Ojha was DC’s frontline spinner during the past four seasons. Why the owners didn’t persist with him despite his heroics with ball is difficult to comprehend. He was the highest wicket-taker during the 2010 edition of the IPL, and was the second highest wicket-taker for DC in the first and second seasons respectively. He was second to RP Singh on both occasions. His ability to restrict the scoring and strike on a consistent basis could have been a huge asset to the side.

Ojha played just nine out of the 14 games for the Mumbai Indians (MI). Considering the fact that MI had a large pool of bowlers to select from, Ojha was definitely underutilised. He could have played a bigger role in the IPL had he still been a part of the DC side.

RCB did have a formidable batting line-up even in the absence of Kevin Pietersen, therefore it wouldn’t have mattered a lot to them when they let go of him. DC were fortunate enough to grab him for the fourth season since their batting was already a bit fragile, and they needed someone to bolster it. Unfortunately for them, Pietersen couldn’t take part that year owing to injury issues. However, they committed a major blunder by letting him go during this edition. The Delhi Daredevils (DD) made full use of his services during his short stay. Pietersen amassed 305 runs at an average of 61.00 and strike-rate of 147.34 in the eight games he played.

Highest scorer in IPL 2011, second highest run-getter in Champions League 2011, and highest run-scorer yet again in IPL 2012 – these are some of Chris Gayle’s achievements since the time he started representing RCB. His overall strike-rates on these three occasions were 183.13, 178.47 and 160.74 respectively. Although the Kolkata Knight Riders (KKR) did win the IPL 2012, they would not mind having a player like Gayle at their disposal. They were fortunate enough to ride on Gautam Gambhir’s heroics throughout the IPL and Manvinder Bisla’s cameo in the finals. If Gambhir hadn’t performed consistently like he did, would KKR still manage to triumph? Hence, someone like Gayle would have solved KKR’s batting woes that were prevalent during quite a few junctures of the tournament.

Tirumalasetti Suman is a hard-hitting batsman with a Twenty20 strike-rate of 120.75. He got DC off to a flying start on numerous occasions during the previous editions of the IPL and made some decent contributions up the order. Considering the fact that there were not many big-hitting batsmen in their batting line-up this time, DC should have retained Suman. Moreover, Suman played just a couple of matches for MI this season as he couldn’t find a spot amongst some big names in that side.

Herschelle Gibbs too had to warm the benches for a major part of the tournament this season for MI. He, alongside Gilchrist and Rohit Sharma, were the essence of the DC side during the first three years of the IPL. Gibbs and Suman both could have featured in a lot more games and proved a point had they been retained by DC.

Nick Compton completes 1,000 first-class runs after being denied of a record