MS Dhoni’s Chennai Super Kings (CSK) are enjoying an extended stay at the top of the table after having their best start to the league stage in the six editions of the Indian Premier League. MS Dhoni’s Chennai Super Kings (CSK) are enjoying an extended stay at the top of the table after having their best start to the league stage in the six editions of the Indian Premier League.

The team from Tamil Nadu has never seen a double-digit in the ‘wins’ column of the points table before this season. They have been by-far the most clinical and the most successful team in the league, but that comes more due to their ability of doing well in the knock-out stages. Their league form, in comparison is not something a team of CSK’s calibre would be proud of.

Same time last year, they were hopelessly clinging on, with a mathematical chance to make it to the play-offs. They managed to scrape through and were a completely different side in the eliminators. They failed to add a third IPL title to their trophy cabinet, but the sheer ability to become a force to reckon with in the knock-out stages is surreal. The 2009-10 season saw them go through merely on Net Run Rate with teams on the third, fourth, fifth and sixth spots tied on points.

So what tweaks have they made to their approach in the league stage this year?

There has been one distinct feature of Chennai’s batting in the season so far. With opener Michael Hussey in the form of his life post international retirement, CSK have devised a sound plan wherein they try and keep as many wickets intact as possible at the halfway stage and score at around seven runs an over. From the 11th over on, when the oppositions is tricked into believing they have Chennai’s batting under control and bring in part-timers to get through the middle overs quickly, the batsmen shift gears. Even if they end up losing a wicket or two in the process, the likes of Suresh Raina, MS Dhoni and Ravindra Jadeja man the middle-order to rescue Chennai from any possible collapse.

Hussey and RCB’s big-hitting West Indian Chris Gayle have been juggling the Orange Cap between them. However, Gayle’s biggest problem has been the lack of a good partner at the top of the order. Virat Kohli’s side have tried different options in Mayank Agarwal, Cheteshwar Pujara, Tillakaratane Dilshan and even Saurabh Tiwary, but none have proved to provide stability at the top so far. This is where Hussey is lucky, with Murali Vijay and Wriddhiman Saha providing ample support from the other end while he goes about scoring runs quickly.

Another trend has been that the Chennai batsmen have not opted for too many aerial shots in the initial overs. Vijay has played a few hoicks, but even those have been calculated shots over the in-field during the powerplay overs. Hussey has scored a lot of his runs with ground strokes, and has left the job to the Rainas and Dhonis to flirt with the wind.

The ploy seems to have worked well as Chennai sit pretty at the top of the table for the first time in IPL, with 10 wins from 14 matches. There is still room for improving the points’ column with two more games to play. With a play-offs spot all but secured, Chennai will probably continue to put their ‘pattern’ to use and fine tune it further before teams head into the crucial knock-out stages. 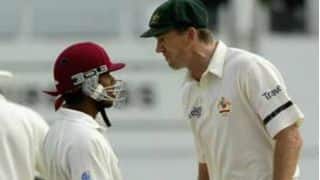