IPL 2013: Pune Warriors India have to persist with the impact player Steven Smith

IPL 2013: Pune Warriors India have to persist with the impact player Steven Smith

How important was Steven Smith’s innings of 39 off 16 balls against Chennai Super Kings? For starters, it ensured Pune’s memorable victory. His explosive knock injected a dose of inspiration to beleaguered Pune side that was seeking inspiration. To thump formidable Chennai at their fortress — the M.A. Chidambaram Stadium that is surely a sign of good things to come from Pune. Or are we jumping the gun, yet again? 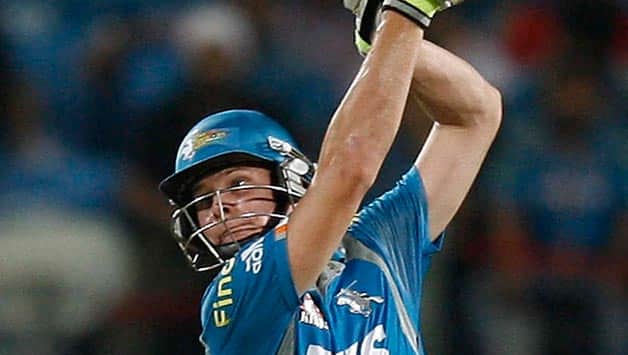 How important was Steven Smith’s innings of 39 off 16 balls against Chennai Super Kings? For starters, it ensured Pune’s memorable victory. His explosive knock injected a dose of inspiration to beleaguered Pune side that was seeking inspiration. To thump formidable Chennai at their fortress — the M.A. Chidambaram Stadium that is surely a sign of good things to come from Pune. Or are we jumping the gun, yet again?

That Smith wasn’t a regular member in the Pune side since the inception of Indian Premier League (IPL), 2013 baffled everyone. His exploits should now make him an automatic choice for the next match at least.

During the IPL 2012, Smith shined with the bat and dazzled with electric displays on the field. Pune had a dismal campaign as they finished at the bottom of the table and had only four victories to show. However, Smith was the star all along and averaged over 40. Not only that but a strike-rate of 135.58 shows that he scored at a good rate. Some of his efforts on the field were inspirational and redefined the art in the shortest format.

Smith has been in India since February as he was part of the Australian Test side. He came into the eleven for the third Test at Mohali and made an instant impact with an innings of 92. In the last Test at Delhi, he scored 46 on a difficult wicket to show that he can adapt to conditions. With that track record, he should have walked into the Pune line-up in their season opener.

With Angelo Mathews as captain, Pune can only choose three other foreign players. Being the feared hitter and an experienced campaigner, Ross Taylor walks in. Aaron Finch has given Pune the impetus at the top and is a crucial member of the side. Mitchell Marsh has been preferred as the all-rounder to provide balance. Thus, Smith was given a game only because the Sri Lankan Mathews couldn’t play at Chennai. That window of opportunity was all he needed to make an impression and to show that Pune had erred in excluding him.

Earlier, Pune had opted for Samuels ahead of Smith as the West Indian has been in the form of his life and is a reputed hitter. However, his record in the IPL is mediocre and a strike-rate of 93 shows that he hasn’t been his usual aggressive self. It was clear that his reputation had trumped Smith in the race for a spot in the playing eleven. Later, he was replaced by Finch — who opened the batting and has played crucial roles in their two victories.

In all likelihood, Marsh may have to make way for Smith. Marsh is a promising prospect, but his spot is the one that is up for grabs. In the five games so far, he has bowled his complete quota of overs only once (he was into his fourth over against Kings XI Punjab when they won the game). With the bat, he has had one decent outing and is more of a floater. Smith would be a better bet as he is in good touch with the bat and also saves many on the field.

Pune have had a difficult start to their campaign, but the win against Chennai is a shot in the arm. They would hope and pray for Yuvraj Singh’s fitness as his presence makes a huge difference to any team. Once he gets back, they would have a formidable middle-order with an inform Smith ready to replicate his performance of IPL 2012. Through all that the captain Mathews has to step up and deliver. After all, the leader’s confidence rubs off on his troops.

'Sir' Ravindra Jadeja: The Rajnikanth of the cricketing world is now an internet phenomenon