Sunil Narine is easily the most deceptive bowler in T20 cricket. With copious variations and the mystery element, batsmen find it difficult to get him away in a format that demands quick scoring. 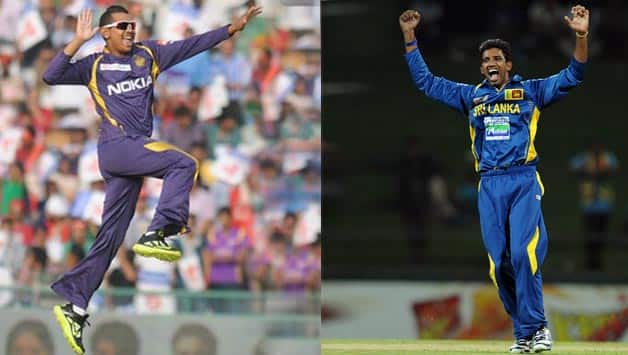 Sunil Narine is easily the most deceptive bowler in T20 cricket. With copious variations and the mystery element, batsmen find it difficult to get him away in a format that demands quick scoring. His hat-trick against the Kings XI Punjab highlighted his value to the Kolkata Knight Riders as he is the defending champions’ trump card.

Kolkata have largely relied on Narine to do the job for them. It was a huge surprise when they picked him for a whopping sum of US$700,000 at the 2012 IPL auction as he was an unknown commodity then. A few months down the line, he had proved his worth for every dollar with a Player of the Tournament performance that helped Kolkata lift the title. A year later, he remains their go to man with the X-factor.

In 68 T20 matches, Narine has accounted for 88 wickets at an average around 15. What is most impressive is his economy rate — a miserly 5.41. He not only restricts the flow of runs, but also picks up wickets and that is a dream combination for any captain. For players with over 80 T20 wickets, Narine has the best economy rate. That places him ahead of the likes of Alfonso Thomas, Dirk Nannes and Lasith Malinga — the top three wicket-takers in T20 cricket.

Batsmen find Narine very difficult to pick and try to see him off on most occasions. His normal off-breaks are mixed well with the dumb-founding “knuckle” ball. This idiosyncratic variation goes the other way and leaves the right-hander at a fair pace. He also varies his speed a little as some batsmen have merely lobbed a catch back at him while trying to defend. The other interesting thing about his bowling is that he doesn’t bowl full too often and concentrates on bowling on a length.

While some teams may unravel the mystery, it would still be difficult to deal with Narine in T20 cricket. Ajantha Mendis’ example best illustrates the point. He burst on to the scene as a deceptive bowler and was almost unplayable early on. Gradually, all teams started picking him and he lost that mysterious aura. His stocks in Test cricket may have reduced, but he remains one of the best bowlers in T20.

In the longer formats, batsmen have more time to settle against such bowlers, but they have to get on with things in T20 cricket. Which is why, bowlers like Narine and Mendis would continue to dominate the shortest format.

As one of the commentators mentioned, Kolkata are revolutionising the way T20 is being played. In the format’s early days, not many would have given the spinners a chance to dominate. With the ever-shortening boundaries and the humongous bats, the tweakers were earmarked for special treatment. However, Kolkata back their spinners to do well and have strengthened that department with the addition of Sachithra Senanayake.

Like Narine, Senanayake was a huge surprise at this year’s auction as he was bought for US$625,000. His economy rate is a shade over six and he is a genuine wicket-taker. The good thing is that he bowls well to the left-handers and can trick them with the incoming deliveries. There is no respite for batsmen when he bowls with Narine as they have to be very alert for their respective stock deliveries.

Usually, Gautam Gambhir prefers to save Narine’s three overs for the death overs. He gives him an over early on and then summons him when the batsmen are in the mood. With Senanayake in the playing eleven, he has more options wherein he can use him early and also during the middle-overs. Their combined total of eight overs is a handful and Gambhir would now rotate them well to keep the batting side guessing. On a helpful track at the Eden Gardens, they would be an even tougher proposition.

At the time of writing Narine has snatched the Purple Cap and has warmed up for the season. On the other hand, Senanayake has only had two outing and would be hoping for a longer stay in the eleven. The knights in the shining armour are ready to take the IPL by storm with their bag of tricks. Opposing teams better beware!