IPL 2013: The spectacular catches of the season

IPL 2013: The spectacular catches of the season

The recently concluded Indian Premier League (IPL) 2013 was not just about the contests between bat and ball. The fielding in this format of the game, especially in the IPL, has been of high quality from the very first season. It was only taken a notch higher when some of the most unbelievable catches were taken in the course of the last eight weeks. Here’s a look at some of the best catches of the season. 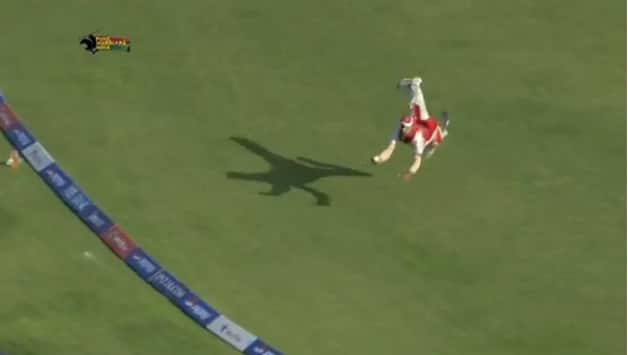 The recently concluded Indian Premier League (IPL) 2013 was not just about the contests between bat and ball. The fielding in this format of the game, especially in the IPL, has been of high quality from the very first season. It was only taken a notch higher when some of the most unbelievable catches were taken in the course of the last eight weeks. Here’s a look at some of the best catches of the season.

Gurkeerat Singh SuperMann’s effort was the fielding equivalent of Chris Gayle’s mauling of Pune Warriors India — unbelievable! He was fielding at fine leg when Pune batsman Ross Taylor slog-swept Praveen Kumar. The ball was certain to reach the boundary, even cross it for a maximum as at one point in time there was no fielder in the frame. Taylor had managed to play it a bit fine but in the end, it wasn’t fine enough. Gurkeerat ran to his right and timed his full stretched dive to perfection and catch the ball with his right hand. He was parallel to the ground when he leapt onto the ball and did well not to let it pop out when he landed on the ground. Deservedly, this was awarded the catch of the tournament.

The former Australian skipper turned back the clock with his unbelievable acrobatic effort against the Delhi Daredevils. Delhi Daredevils’ opener Unmukt Chand tried to turn Harbhajan Singh’s delivery onto his leg side but played too early to get a leading edge. The 38-year-old Ponting at extra cover leapt, slipped and flew! He was just about to take a good diving catch when he lost his balance. Before one could bat an eyelid, he regained enough composure to push himself to go for the ball. Within seconds, Ponting, a veteran of the game, had displayed some stunning acrobatic skills that saw him fly for the ball. It was a fitting dedication to his fielding coach Jonty Rhodes.

The big West Indian’s knack of taking some of the most spectacular catches just inches inside the boundary line is absolutely amazing. This catch of MS Dhoni couldn’t have come at a better time for the Mumbai Indians. Chasing 149, Chennai needed 11 runs from the last over with Dhoni still in the middle to keep his team’s chances alive. He almost put Mumbai on the backfoot when he thwacked the length delivery from Munaf Patel towards the deep midwicket boundary, only for Pollard to come in the way. Pollard did well to get in the line of the ball and a perfectly timed jump coupled with outstretched hands helped him pull off a blinder. Chennai sneaked through with a nine-run victory.

The big man was at it again, this time against the Kings XI Punjab. Chasing 175, KXIP opener Shaun Marsh was looking to up the ante and decided to go after Pragyan Ojha from the outset. He hit the ball straight over the bowler’s head and was sure of getting the maximum out of it until the big Polly intervened again. This time, he was at long on, jumping enough for his outstretched right hand to pluck the ball out of thin air and land back safely, making sure his feet do not go over the line. His ability to balance his weight on this occasion was commendable.

Mumbai Indians’ Ambati Rayudu took a stunning catch, just inches away from the boundary line to send the dangerous Chris Gayle back to the hut. Gayle picked a delivery from outside off stump and tried to slog sweep it but could only manage to top edge it. However, it seemed like he had done enough for it to sail over the long on boundary. The ball was in the air for a lot of time and made it tougher for Rayudu to judge it at such a position. In the end, he had to move a few steps backwards towards the boundary to take the catch. He did exceptionally well not to step over the boundary line after collecting the ball just inches inside.

The young Indian cricketer did a Jonty Rhodes at point when he took a two-handed catch while making a full length dive to his right to dismiss Delhi Daredevils skipper Mahela Jayawardene in the match between Delhi and Rajasthan at the Feroz Shah Kotla. Rahul Shukla bowled a full delivery and Jayawardene only managed a leading edge. Rahane leapt to his right to take a breathtaking catch.