A recap of big names who struggled to make a mark with the ball.

Even though the Indian Premier League (IPL) 2014 is suggested to be a batsman’s game, over the years the tournament has seen some amazing bowling performances. From Anil Kumble’s five-for in 2009 to Pravin Tambe’s hattrick against Kolkata Knight Riders (KKR), IPL has seen same famous names proving age is just a number and some youngsters breaking into the big league. However, there have been few famous names, who despite having big achievements in the international arena, could never made it in the cash-rich league. Sudatta Mukherjee writes about the bowlers, who have been unable to have underachieved for their teams in IPL 2014.

“An ounce of performance is worth pounds of promises.”

American yesteryear actress Mae West, whose career spanned over seven years would have hardly thought that the statement will come true in case of players who will be playing in the Indian Premier League (IPL). Cricketers are bought and transferred on the basis of their performances. There are many of them who are picked up by the franchise owners on the grounds of the promises that their past or recent performances have showcased. While some are able to stand up to the expected levels, there are some who fail to achieve or reach the expected level. Following are the few cricketers, who despite being famous for their bowling performances in the past or recent times, have failed or under-achieved in the cash-rich league.

1. Ben Hilfenhaus – The Australian pacer who have played 27 Tests and 25 One-Day Internationals, has been one of Chennai Super Kings’ prime bowlers over the years. However, in this year’s IPL, he hasn’t been able to rise up to the occasion. He last played two years, where he ended up with 14 wickets from nine matches at an average of 16.64 and had an incredible economy rate of 6.85. However, already having played seven matches in IPL 7, Hilfenhaus has been able to only take eight wickets till now and has an average of 26 and economy rate of 8.32. In a bowling line-up which is powered by young Indian bowlers like Mohit Sharma and Ishwar Pandey, one would have expected the Tasmanian to take the anchor role and provide some stability. But, going ahead of him, young Mohit Sharma have delivered much better than the Australian. In the match against Kings XI Punjab (KXIP), Hilfenhaus had an economy rate of 9 and picked up one wicket from his four overs.. His worst performance came when against Kolkata Knight Riders (KKR), he gave away 19 runs in the 16th over of the match. In the match against Punjab too, he gave away 17 runs in one over.

2. Mohammed Shami – In the recent past, the Indian pacer has been one of the two bowlers who have consistently performed one a higher level than it was expected of him. Playing for the national side, he has a decent bowling average of 29.48 in Tests and economy rate of 3.55. In ODIs, his economy rate is 5.82 and he has already taken 50 wickets from 29 ODIs. The same cannot be said about his IPL run. Shami, who has been one of the most wanted players in the IPL 2014 auction, has been unable to achieve what was thought of him. From 11 matches so far, he has picked up six wickets at an average of 57.16. His economy rate is soaring high at 8.36. One of the costliest bowlers of the season so far, Shami’s worst performance probably came against Chennai Super Kings, when he ended with figures of 4-0-42-0. He had an economy rate of 10.50. In the same match, he gave away 17 runs in the 18th over of the match. His track record against Chennai has been abysmal in this season, with economy rates of 11.25 and 10.50. Among bowlers conceding most number of boundaries  ths season, Shami ranks No 1 with 34 fours.

3. Jacques Kallis – The experienced South African all-rounder, who bid goodbye to Test cricket last year, has been one of Kolkata Knight Riders (KKR) best players so far. His all-round performance has provided hope and anchored KKR’s innings many a times but he isn’t shining with the ball off late. From 16 matches in IPL 6, he had an average of 24.62 with an economy rate of 7.43 and in IPL 5, his average was 26.86 and economy rate of 7.46. In IPL 7, he has an average of 46.50 and an economy rate of 8.45 from eight matches. In comparison to earlier seasons, Kallis hasn’t been used by the skipper this time around. In the match against Punjab, Kallis, had a terrible economy rate of 12.66 and ended with figures 3-0-38-0. In the first over of the Punjab innings, Kallis was hit for 17 runs by Virender Sehwag. Probably understanding that the all-rounder has been costly this season, Kallis was dropped by Gautam Gambhir in the match against Mumbai Indians, and didn’t play against Hyderabad on Sunday night either.

4. Mitchell Johnson – One would have expected the Australian pacer to break havoc in IPL 2014, coming from a good series against England in Ashes Down Under and against South Africa. However, Mitchell Johnson has not been as scary as it is hoped of him. There was a lot of hullabaloo when Mumbai Indians (MI) didn’t retain him after a successful IPL season with his former side last year. But it hardly seems Mumbai will be unhappy with that loss. Despite picking up 10 wickets so far, Johnson has an average of 30.10 and an economy rate of 7.85. Compared to many other bowlers in the tournament, Johnson’s average and economy rate may seem decent but with young Turks like Sandeep Sharma and Rishi Dhawan faring well, it is quite an unhappy sight to see Johnson perform lower than the expected levels, especially when he has an average of 20.97 in Twenty20 Internationals. In Punjab’s first match of the season, Johnson provided a disappointing show. He ended with figures 4-0-47-0 and had an economy rate of 11.75. In the match against KKR, Johnson was hit for 19 runs in an over by Uthappa. He had an economy rate of 11 in the match.

5. James Faulkner – Even though he is less experienced when compared to many of his teammates from international side, Faulkner has had a good track record with his all-round performances for Rajasthan Royals. With an average of 15.25 and an economy rate of 6.75, Rajasthan had rightly retained Faulkner. However, after 11 IPL matches, he has picked up 10 wickets and has an average of 32.60 and an economy rate of 8.97. He has economy rates of 10.50 against Royal Challengers Bangalore, 12.27 against Kings XI Punjab when they played at Sharjah and 12.66 against Chennai at Dubai. A cricketer who has a reputation of winnings matches from unexpected situations, Faulkner is yet to deliver with the ball. In his second match for Rajasthan  this season, Faulkner was hit for 19 runs in an over by Dwayne Smith. Against Chennai at Dubai, he had an economy rate of 12.66 and against Punjab he had an economy rate of 12.27. In Monday night’s match against Mumbai Indians, Faulkner ended with figures 4- 0-47-0 and had an economy rate of 11.75. The only bright spot was in the thrilling match against Kolkata Knight riders which went in to Super Over where he bagged three wickets in an over at the death.

Though it will be unjustified to list a bowler of such capability in the above list, it is although the truth that Dale Steyn hasn’t been able to rise to the standards with which he is more famous. The man who has an average of 15.98 and an economy rate of 6.45 in T20Is, have given some sloppy performances which really hasn’t helped the team. In IPL 2013, he was influential in Sunrisers Hyderabad reaching the playoffs and had an average of 20.21 and an economy rate of 5.66. However, fast forward after 11 matches in IPL 7, his average stands 29.27 and has an economy rate of 7.31. His worst performance of the season was against Punjab at Hyderabad. Steyn gave away 51 runs from his four overs and had an economy rate of 12.75. He went wicketless and in the 18th over of the match, George Bailey hit him for two fours and two sixes. Steyn gave away 22 runs in the over and surely he didn’t look happy with himself. Not to forget the smacking he received from AB de Villiers in Bangalore.

Although, with few more league matches and the playoffs remaining, one or two vital innings by the above mentioned cricketers might have the franchise owners forget all the past performances. Like its said, you’re only as good as your last performance. 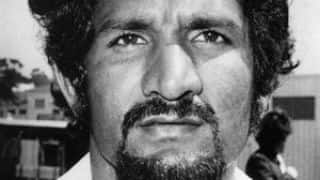