After 20 eventful matches, the Indian Premier League returns to the land of its conception.

After 20 eventful matches, the Indian Premier League (IPL) returns to the land of its conception. United Arab Emirates (UAE) has been a productive hunting ground for some teams, while others have struggled to carve a niche for themselves. Shiamak Unwalla looks at how the change in conditions might affect each side.

IPL 7 has got off to quite an interesting start. One of the best sides on paper, Kings XI Punjab (KXIP), are the current table toppers, while perennial favourites, Chennai Super Kings (CSK) are second on the points table. On the other hand, the champions of the 2013 edition of the IPL, Mumbai Indians (MI), had a torrid time in UAE with five losses in as many games.

So, what will the Indian leg hold in store for the teams? Here is a look at how the teams, in order of their standings in the points table at the end of the UAE leg will benefit (or not) from playing at home.

Kings XI Punjab: The current kings of IPL 7, KXIP have won a record eight consecutive games in the IPL, across two editions. After winning the last three games they played last year, they have won all five matches this year. However, their dream run might just come to a close when they return home. One of KXIP’s “home” grounds this year is Cuttack, a ground not known for big scores. The low and slow nature of the Cuttack pitch might make it difficult for their power players like Glenn Maxwell and David Miller to score with the same freedom that they have been doing so far.

However, Cheteshwar Pujara could be a key batsman for them in these upcoming matches. They will be relying on their bowling attack a bit more now, with young pace bowler, Sandeep Sharma emerging as a very exciting talent. Mitchell Johnson will be waiting to get back to Mohali — which is their second home ground — where the hard and fast pitch will be far more to his liking.

Chennai Super Kings: The CSK side have been their usual dominant force, with four wins in five games. Their only loss so far, against KXIP, has since become a distant memory. With Dwayne Smith and Brendon McCullum proving to be lethal at the top, and Mohit Sharma and Ishwar Pandey showing their guile with the new ball, they have looked very good. Their home grounds are Ranchi and Chennai. While they absolutely love to play at Chepauk, they are relatively untested at Ranchi. But with the entire city clamouring for its hometown hero, MS Dhoni, the crowd support will certainly not be a problem for CSK. Ranchi has traditionally supported spin, which has always been one of the strong suits for CSK. With world-class spinners like Ravichandran Ashwin and Ravindra Jadeja in their line-up, and the highly skilful Samuel Badree waiting in the wings, CSK could well be one of the toughest sides to beat during the Indian leg.

Rajasthan Royals: Rahul Dravid is currently winning against Sachin Tendulkar and VVS Laxman in the battle of the mentors. RR are placed third in the table right now, and they will be absolutely charged up after the thrilling Super Over victory against KKR. However, the biggest weapon of the Shane Watson-led side, the Sawai Mansingh Stadium in Jaipur, has been taken away from them. RR had managed to construct an impregnable fortress at Jaipur in IPL 6, but with Ahmadabad being their new “home ground,” their aura of invincibility at home would have diminished slightly. RR are a very good side, and they have played a lot in Ahmadabad before. But as good a ground as Motera is for them, they will sorely miss their actual “home.”

Kolkata Knight Riders: KKR play all their home matches at Eden Gardens, one of the most picturesque grounds in the world. While their campaign has been a bit of a stop-start affair so far — they pulled off a remarkable victory against RCB, but completely imploded against RR — they have fought some very close games. With skipper Gautam Gambhir overcoming his nightmarish form, KKR will look to pose a much stiffer challenge to visiting sides.

Royal Challengers Bangalore: RCB will not care too much about where they play now that they have their talismanic opener back. Chris Gayle announced his arrival in IPL 7 in typical fashion by taking the tournament’s leading run-scorer, Maxwell, for 20 runs in the first over he faced. That could well have been a metaphor of sorts, with Gayle making a statement that he would smash Maxwell’s scores in this IPL. Gayle fell early in that match, but his intent was there for all to see. RCB play all their games in the M Chinnaswamy Stadium in Bangalore, which has been a happy hunting ground for them in recent times. Their batting line-up, which consists of some very big names, hasn’t been able to live up to the expectations yet.  Virat Kohli will be hoping that a return to familiar territory will be just the boost his team needs.

Sunrisers Hyderabad: The SRH setup play all their home games in Hyderabad, where their bowling last year was highly impressive. They will be hoping that their very impressive looking bowling line-up will start living up to its name at home. While Dale Steyn has been menacing as ever and Bhuvneshwar Kumar has been swinging the ball every way possible, their spinners Amit Mishra and Karn Sharma have struggled to stem the flow of runs and take wickets. Both of which were regularities for SRH last year. They have constantly shuffled their third pacer’s spot around, with Ishant Sharma and Irfan Pathan getting a couple of games each. While Ishant has remained largely unimpressive, Irfan turned up with a stellar spell against a rampaging Kieron Pollard in the match against Mumbai. SRH will be hoping that their line-up clicks at home, and that their bowling will go back to being at its potent best.

Delhi Daredevils: DD setup completely overhauled their line-up following a disastrous time in 2013. So far in IPL 7, this rehash hasn’t worked. Kevin Pietersen, their fulcrum, has played just a couple of games, and has looked far from his best. Murali Vijay has been in decent form for DD, while JP Duminy has been at his consistent best. However, the team is yet to perform as a unit, and this is where crowd support could well come in handy. Playing at the Ferozshah Kotla should help the DD recover some form. With Pietersen’s excellent record at the ground, anything could be possible for the “Double Ds,” as Danny Morrison puts it.

Mumbai Indians: Last year, Wankhede was the stronghold for MI. Like the Royals, they did not lose a single game at home. However, in the UAE leg of this edition of the IPL, Mumbai have looked woefully out of sorts. They have recorded five losses on the trot without looking like they’d win at any point. Kieron Pollard played a blinder against SRH recently, and that could be just the shot in the arm they needed to galvanise them into action. But more than individual performances, MI will be thrilled to be back at their happy hunting ground. Wankhede has seen many a Lasith Malinga toe-crusher, many a Rohit Sharma boundary, and many a Harbhajan Singh dot ball. Their fans will be praying that MI can put together a similar winning streak at home this year like they did in 2013, and follow it up with decent performances even while visiting. 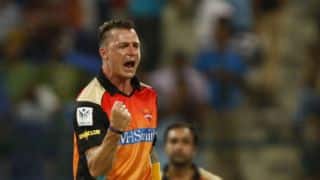