The hysteria behind the auction itself shows how the cash-rich league covers up all the wrongs.

This week I spent an unreasonable amount of time watching the Indian Premier League (IPL) 2014 Auction. For those who don’t follow cricket, it’s a collection of some of India’s most corrupt individuals coming together to buy players who can then (allegedly) fix matches for personal gain while distracting Indians through Charu Sharma’s receding hairline and Rochelle Rao’s receding IQ.

The event is simple. A respectable looking auctioneer is brought down from England to give the proceeding a sense of gravitas. Names of different players are then called out like item girls and money is thrown in their general direction. It is at this point Kingfisher employees turn their TV on and notice Vijay Mallya spending Rs 14 crores on Yuvraj Singh, despite not having paid their salaries and contemplate violence.

Irony is stabbed further in the gut when Black players are auctioned without anyone blinking an eye because history is not taught in MBA schools. Pakistani and Bangladeshi players are ignored for being Pakistani and Bangladeshi. Piyush Chawla is sold for an obscene amount of Rs 4 crores, making even Deepak Chopra slit his wrists and contemplate the meaning of life. Entertainment channels make Preity Zinta have a wild, romp heavy affair with Sanjay Bangar because he is unfortunate enough to find a seat between her and Ness Wadia. Finally, everyone stands and has a one-minute silence for Indian hockey players who are sweating somewhere in Punjab or Jharkhand planning their next meal.

The auction is the most concentrated version of the ethos that defines the cricketing circus we call the IPL. It’s fascinating to the layman like me not because of the cricketing strategies and manoeuvres on display, but because it is an exercise in power. Harsha Bhogle tweeted recently that he was looking forward to the auction to look at team strategy, which is like saying you love going to strip clubs because of their food. Fans love the drama of someone being bought and sold at a high price because it’s almost aspirational. Most importantly, through the BCCI, fans think of it as India showing the rest of the world that it can control and dominate a sport. It doesn’t even matter if the entity is dubious and working for personal gain, as long as it projects global power it seems to get a free pass.

Just last week a court appointed committee found Gurunath Meiyappan, N Srinivasan’s son-in-law and a principal of the Chennai Super Kings guilty of having assisted in spot fixing. The average fan and the media remained mostly oblivious to the report with business as usual before the IPL 2014 auction. Why would a sport try and cleanse itself when the majority clearly doesn’t seem to care? In our minds and to our economy at least, the IPL has become too big to fail.

When you’re watching this year’s edition and getting swamped in the mass-produced hysteria, maybe keep that in mind. Now if you excuse me, I’m going to go and complain to Narendra Modi about why Ahmedabad doesn’t have its own team yet.

(Gursimran Khamba is a writer, comic and co-founder of All India Bakchod. The above article was first published in DNA) 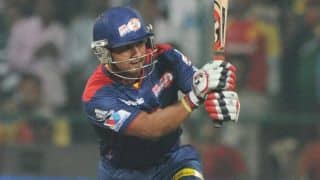