The IPL authorities will be praying for a clean edition this year.

The Indian Premier League (IPL) has had a long history of controversies since inception, and this is one of the aspects that have somehow been associated with it. From the infamous IPL 2013 spot-fixing and betting scandal that rocked the cricketing fraternity to the sacking of its architect Lalit Modi in 2010, Shahrukh Khan’s brawl at the Wankhede Stadium and also the media boycott that it faces, the league has managed to grab the headlines and still remain one of the hot properties. Devarchit Varma has more…

After the spot-fixing and betting scandal that surfaced last year, the IPL returns amid growing calls for its cancellation and clean-up. The IPL 2014 is all set to begin in the United Arab Emirates (UAE) on April 16, with Mumbai Indians taking on the Kolkata Knight Riders in the first match of the tournament. Many in the cricket fraternity — even including the staunchest supporters — were left shell-shocked after the events that panned out last year in May. But, the game emerged winner above everything else and the fans and the IPL franchises are all set for yet another gruelling season of the Twenty20 mania.

Since its inception in 2008, the IPL has witnessed several controversies, and the latest being allegations of spot-fixing and betting, which were there in the 2012 edition as well. Apart from these, there have been media boycotts, the IPL and the England and Wales Cricket Board (ECB) being at the loggerheads, and many more. Let’s take a look:

Controversy with the ECB:

The England and Wales Cricket Board (ECB) has never allowed an IPL window in their schedule — as the County cricket begins during an IPL season. Back in 2008, the ECB declined giving No Objection Certificates (NOCs) to its players, while the IPL management remained adamant that no player would be allowed to take part in the competition if he does not have the requisite NOC.

During a league match between the Mumbai Indians and the Kings XI Punjab in the 2008 edition of the IPL, Mumbai’s former captain Harbhajan Singh allegedly slapped his India teammate KXIP pacer S Sreesanth after the end of the game. While the video evidence of the same has not yet been made public (Lalit Modi even revealing at one point that he contemplated releasing that video), there has been much made of the two cricketers. Sreesanth was seen crying alongside his KXIP teammates. While Sreesanth claimed Harbhajan ‘elbowed’ him and not ‘slapped’ him, Justice Sudhir Nanavati said in his report that Harbhajan did actually slap Sreesanth.

The tournament’s architect, Lalit Modi was sacked as the IPL commissioner moments before the final of the 2010 edition as the Board of Control for Cricket in India (BCCI) found him guilty of misappropriation of funds, related to the organisation of the second edition in 2009 in South Africa. Modi was also accused of having stakes in as many as three franchises, and his consistent refusal to step down from the post of the IPL commissioner lead to his sacking. Also what was controversial was the manner in which Modi revealed the ownership details of the Kochi Tuskers Kerala (KTK) franchise on the social networking platform, Twitter.

In September 2011, the Kochi-based franchise of the IPL was terminated for failing to pay their franchise fee to the BCCI. There were also some discrepancies regarding the ownership pattern.

Cricketer blamed for molesting a US national

Australian cricketer Luke Pomersbach was blamed for molesting a US national during the 2012 edition of the IPL. The matter was solved outside the court.

Cricketers arrested from a rave party in Mumbai

Indian spinner Rahul Sharma and South Africa’s Wayne Parnell were arrested by the Mumbai police for attending a party where drugs were being served. The two cricketers were later on tested positive.

In June 2012, after a news channel’s sting operation shocked the cricket fraternity with couple of Indian players being embroiled in the spot-fixing controversy, the BCCI took the harsh step. The 28-year-old TP Sudhindra was handed a ban, Shalabh Srivastava was banned for five years. The other players who were banned for a year each were Mohnish Mishra, Amit Yadav and Abhinav Bali.

The Mumbai Cricket Association (MCA) during IPL 2012 handed a five-year ban on the Bollywood superstar and the co-owner of the Kolkata Knight Riders (KKR), when he was involved in a heated discussion with the security officers at the Wankhede Stadium in Mumbai. Shah Rukh Khan even apologised for losing his cool, but the MCA remains unperturbed as the ban has still not been revoked.

Certainly, the biggest of all. On the night of May 16, Rajasthan Royals’ cricketers S Sreesanth, Ajit Chandila and Ankeet Chavan were arrested by the Mumbai police for spot-fixing some of the matches of IPL 2013. What unfolded in the days that followed shocked the cricket world. Bollywood actor Vindoo Dara Singh was arrested in the case, and then the son-in-law of BCCI chief N Srinivasan, Gurunath Meiyappan. The owners of Rajasthan Royals were also questioned. The Supreme Court is now hearing the matter as in April 2014 it asked Srinivasan to step down from the post and allow a fair probe into the matter. 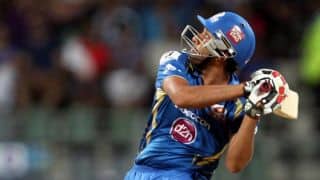