Chennai Super Kings (CSK)  are the most successful franchise of the Indian Premier League (IPL), and they continue to pose the same threat every season. The two time champions and Champions League T20 2010 winners have a formidable side, with a core that has remained intact since the first season. When compared to their roster from previous years, this year they have a few more new faces. However, skipper Mahendra Singh Dhoni is a master at building a side and inspiring them to take on challenges. It may be a stiffer challenge this year, considering the uneasy backdrop of controversies that have hit them since the last season. Chennai will do their best to keep that away, as they march onto the field to take on the other contenders.

Dhoni is the man for Chennai. The whole side builds around his personality and the confidence he exudes is personified by the entire setup. In times of crisis, the team is often a picture of calmness and there is no perceivable panic in the side. Also, he marshalls his side well, blending in the new recruits and helping them seamlessly fit in. He has his trusted lieutenants, who barely fail in the hour of crisis, and there is a set pattern to Dhoni’s leadership. At the same time, he is flexible in this format and comes up with good tactics to outsmart the opposition.

Apart from Dhoni, Chennai have Suresh Raina, Ravichandran Ashwin and Ravindra Jadeja. Raina is a vital cog of the line-up, while batting at No 3 position, and he can set the tone for the innings. The IPL is his territory and he is a dangerous proposition for any side. Jadeja has added good balance to this team with his all-round skills. Over the last one year, he has grown in stature as a cricketer and inspires more confidence. Ashwin is a key player considering his ability to bowl at any stage of the innings. They have Mithun Manhas, who is a new recruit and he could play a crucial role with the bat in the middle-order.

Let us start with Dwayne Bravo, the only overseas star retained by Chennai. This all-rounder is a true game-changer and has fit into the Chennai side quite well since he was bought in 2011. Last year, he showed his true value with the ball, as he walked away with the purple cap. In the ICC World T20 2014, he was in good form with the bat, but didn’t bowl due to a side strain. Chennai would hope he recovers, so that they can have his services in that department. Chennai are actually spoilt for choices, if they have to pick four, but Brendon McCullum, Faf du Plessis and Dwayne Smith should walk into the side, as the other three players apart from Bravo.

Chennai have kept faith in Mohit Sharma, who bowled well last season and worked his way into the Indian team. Plus, they have also brought in Ashish Nehra and Ishwar Pandey. There was quite clearly an intent to bring in Indian bowlers into the setup. In Pawan Negi, they have another left-arm spinning all-rounder, but with Jadeja in the side, it is difficult to see him get a game.

Chennai is Chennai! That could be their biggest strength. There is the inherent character in Twenty20 (T20) games and they have players who fulfill different roles in the side. Their batting looks extremely strong with McCullum, Du Plessis, Raina, Dhoni, Jadeja and Bravo. The spin bowling department is formidable with Jadeja and Ashwin in the side.

The fast bowling department may be a concern for Chennai. Ben Hilfenhaus, John Hastings and Matt Henry are some of the overseas seamers, but it is difficult to see them get a game. This would mean that they would have to depend on their Indian lot of fast bowlers, who have a tendency to go for runs.

Save the 2009 season, Chennai have made it to all the IPL finals. They won in 2010 and 2011, finishing runners up on three occasions, which includes the last three seasons. 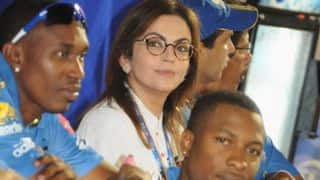 IPL: What value does a franchise owner bring to the side by sitting in the dugout?