Appointing an overseas captain is a risk as there are only four slots available for the foreigner.

There was a surprise in store for those who tuned into the Indian Premier League (IPL) 2014 game between Sunrisers Hyderabad (SRH) and the Kolkata Knight Riders (KKR). The team’s mentor VVS Laxman, announced half an hour before the game that Darren Sammy had replaced Shikhar Dhawan as the captain of Hyderabad. With their progress hanging in the balance, Hyderabad took the call of appointing the more experienced leader to take them through, but was it the right call?

On his captaincy debut in the IPL, Sammy did a decent job. He certainly looked more proactive than Dhawan, at times a bit too much though. He was around his bowlers almost all the time and set fields quite intelligently. It was only that his batsmen had not given him enough runs on the board that he couldn’t defend it. But, Hyderabad fought and a lot could be attributed to the way Sammy led the side. In comparison, Dhawan looked passive from a distance and the seniors in the side were around to help him. Darren Sammy was almost running his own show.

While the decision may be good on a leadership front, was it right tactically? Sammy has had a poor IPL 2014 and his struggles compounded during his painful 16-ball seven against Kolkata. With the ball too, he hasn’t done much. Hyderabad don’t look the formidable bowling side they looked last year. But Sammy is in as the all-rounder, and made it through because the gamble with Moises Henriques did not work.

But changing captains at a crucial stage can work at times for a side. Yes, the players may have to get used to a new style of leadership, but it may also infuse some energy. In 2009, Kevin Pietersen left for England mid-way through the tournament. Anil Kumble led admirably in his place and took the team to the final of the tournament. In 2013, Ricky Ponting, while a fine captain, had to make way for another foreigner as Rohit Sharma took over. And, the rest is history. Hyderabad too have had their own share of captaincy woes. Last season, Kumar Sangakkara was struggling and that allowed Cameron White to take over, who took them to the playoffs.

Appointing an overseas captain is a risk as there are only four slots available for the foreigner. You need four good, in form players there. The international players are usually the trump cards and if they fail, it only adds to the team’s difficulties. When compared to that, an Indian captain is a safe bet as they have seven slots to fill. But, ultimately, he has to lead the side and that is why Hyderabad have brought in Sammy. They need a leader who will lift the side and make those proactive calls in the middle.

It is time for Sammy to rise to the occasion as a player as well. It is getting increasingly tougher for then to stay alive in the tournament and all they can do is win their remaining games and hope for a miracle. But Sammy’s leadership may just set the tone and thinking for the next season. Thus, the upcoming games are crucial for Hyderabad in more ways than one. 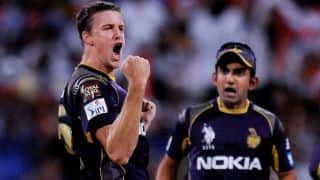