Kolkata Knight Riders have a talented bunch of all-rounders.

In the Indian Premier League (IPL), Kolkata Knight Riders (KKR) have been a team that in recent seasons relied mainly on one player to win matches. That is West Indies’ mystery spinner Sunil Narine. While he is their trump card, they have a bunch of low-profile all-rounders, who are quite talented. Shrikant Shankar analyses the mix of all-rounders in the squad for IPL 2014.

Jacques Kallis is arguably the greatest all-rounder the world has seen in the past 15 years. He probably is even South Africa‘s greatest player ever. But Kallis is 38 now and his best years are well past him. His fitness has never been an issue and in a two-month long Twenty20 ( T20) format, he can be expected to be as fit as he can. Kallis has experience in the IPL, as he has been part of it right since its inception. He played an important role in Kolkata winning the title in 2012. He doesn’t have the best of strike-rates, but can be very difficult to dismiss. That could come in handy in a low-scoring match. He also can be expected to bowl four overs and not give many runs away.

The Bangladeshi all-rounder was for a certain time the best in the world. While Shakib Al Hasan has not really faded away, Kolkata have not exactly played him that often before. His left-arm spin can be very useful, as he is a wicket-taker and also does not concede many runs. He can provide the fireworks with his batting to increase the tempo of an innings. The one thing that goes against Shakib in the IPL is that only four foreigners can be played in the XI. This is a problem for many players in other teams as well. Narine is probably the first name in the team. There might be a tendency to go for Morne Morkel and Pat Cummins as both are extremely quick. Then there is Kallis and a few others. So, if Shakib can grab onto an opportunity early on, it could ensure his stay in the team.

One might not consider Yusuf Pathan as an out-and-out all-rounder, but actually he does his fair share of bowling. He is primarily there as a batsman and is expected to score a lot of runs — that too, quickly. Yusuf has actually regressed in his batting in the last few years forKolkata, so, his bowling is very important to keep him in the team. He is not a wicket-taker, but is expected to keep the run-scoring down as best as much as he can. If he does take the odd wicket somewhere, it will be a bonus. One cannot predict whether Yusuf will regain his batting form in IPL 7, but if he does, it will be to Kolkata’s benefit.

Ryan ten Doeschate is another quality all-rounder, who has not seen much IPL action due to the limited number of foreigners allowed in a team. The Netherlands international has won the ICC Associate Player of the Year award a record three times. It is probably his lesser profile status that goes against him from being included in the team. He has a strike-rate of 135.66 in the IPL, but this is in only 13 matches overall. He hasn’t bowled that often too, but his international and other T20 statistics show that ten Doeschate can impress, if given a chance.

Now, Andre Russell is not the best all-rounder one can find in the IPL, but he has the ability to win matches. He is an exceptional fielder and his mix of fast-medium bowling and middle-order power-hitting can be very effective in T20 cricket. He is already a World T20 winner for the West Indies and adds that spark to the otherwise dull-looking, yet talented, line-up. Russell has a brilliant strike-rate of 153.25 with the bat in T20 cricket, but can be on the expensive side with the ball. His economy-rate is 8.47.

One might start to ponder why Piyush Chawla has been included in a list of all-rounders, but the writer feels that there is more to his batting than what meets the eye. A glance at his batting numbers in all formats of the game, notably not with India, suggests that he is a handy lower-order batsman. Chawla has a healthy average of 31.85 in First-Class cricket and 23.31 in limited overs cricket. In T20s, his strike-rate is 124.44 — not bad for someone who is not thought off as a contributor in the runs. He can be expected to get a few runs lower down the order for Kolkata, but he is primarily a bowler. His leg-spin can be predictable and he has a tendency to be quite expensive. KKR need Chawla to take more wickets and ease the burden on Narine.

Kolkata have a good bunch of all-rounders in their squad. While all the focus will be on Narine and captain Gautam Gambhir, the all-rounders can quietly go about their business and prove to be useful. They do hold the key to success for Kolkata in IPL 2014.

Now, it will also be interesting to see what combinations are used during the tournament. One can get an idea of it during the opener against defending champions Mumbai Indians on April 16. 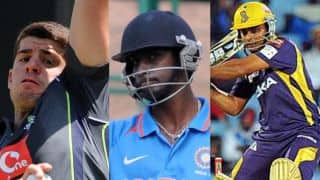 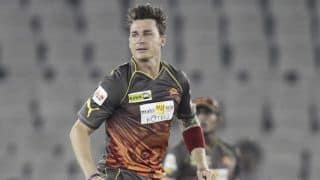