If rain washes out play against Punjab, Kolkata will directly head into the Eliminator.

After doing magnificently to get to the second spot in the Indian Premier League (IPL) 2014, Kolkata Knight Riders (KKR) may just be subjected to a cosmic misfortune if the rain Gods decide to intervene in their Qualifier 1 against Kings XI Punjab (KXIP). Shiamak Unwalla looks at how the “rain rule,” while fair, is rather unfortunate for the second-ranked side.

Kolkata Knight Riders (KKR) making it to the playoffs was a doubtful matter midway through the Indian Premier League (IPL) 2014. That they not only qualified, but finished in the top-two is a miracle eclipsed only by the fact that Mumbai Indians gate-crashed into the final four in unbelievable fashion.

However, all their efforts might just have been redundant, as the advantage of finishing second may not come in to play at all. There have been predictions made by the Indian Meteorological Department of exceedingly heavy rainfall in Kolkata, the venue of the Qualifier 1, over the next couple of days. If this happens, as PTI reported, “it will be advantage Kings XI Punjab…as per the rule 21.10 (b) of the IPL Playing Conditions, the team with a better run-rate in the league stage will progress into the final.”

This “rain rule,” while fair to the team that has been consistent throughout IPL 7 i.e. KXIP, could prove disastrous for KKR. They are currently on a seven-match winning streak. They even managed to chase down 161 in less than 15 overs, courtesy a Yusuf Pathan special that saw him make 72 off just 22 balls. That superlative innings helped catapult Kolkata to the second position, thereby enabling them two shots at reaching the final.

However, with the forecast of heavy rains, it seems that the Qualifier 1 might just get washed out. If that happens, Punjab will go through to the finals, while Kolkata will face the winner between Chennai Super Kings (CSK) and Mumbai Indians (MI). Now, some might argue that if KKR is the better side, they ought to win anyway. But in a contest like this, momentum is everything. Mumbai are coming off a spectacular victory against Rajasthan Royals (RR), and that makes them a very dangerous side right now. Likewise, Kolkata are coming off a brilliant victory themselves, but a break in the competition could mean that their hard-fought momentum could diminish slightly. If that happens, then no matter who they take on, they will be up against a side that has just won a lot of games.

Chennai have reached the finals five times out of six. If any side knows how to win a knockout game, it is MS Dhoni’s men. In IPL 2012, they just about managed to get into the top-four, and then stormed past Delhi Daredevils (DD) and Mumbai Indians to reach the finals effortlessly, where they failed to beat eventual champions Kolkata. Mumbai are the defending champions, who are currently riding on a wave of confidence that must be sky-high. Irrespective of whom they might have to face, KKR will have their backs, unfortunately, up the wall. Right now, all they can do is pray for clear skies for at least enough time to play a five-over game — a shootout between Yusuf Pathan and Glenn Maxwell ought to make for an interesting time. 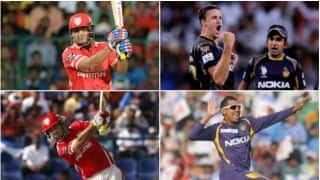 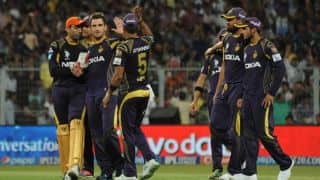