Lendl Simmons has shown the will and grit required to play at a high level.

Lendl Simmons’s past two scores in the Indian Premier League (IPL) 2014 are 38 and 68 for Mumbai Indians. These are scores any team would be glad within back-to-back T20 matches. Many questioned Simmons inclusion in the Mumbai squad as he is not a typical T20 batsman. Simmons, though, has outshone contemporaries for Mumbai like Michael Hussey and Ben Dunk, feels Shrikant Shankar.

Michael Hussey was considered a good buy for Mumbai Indians in the Indian Premier League (IPL) 2014 auction. He was the Orange Cap winner from IPL 2013 for Chennai Super Kings. Although, less slam-bang than Dwayne Smith, Hussey is more consistent. Smith went to Chennai and there was a belief an equal trade occurred. But Smith has gone on to be in contention for the Orange Cap this term and Hussey has flopped. The gritty Australian played the first four matches for Mumbai in IPL 2014. His scores were —  3, 16, 1 and 10 — clearly not good enough.

Ben Dunk was bought after being named the Big Bash League 2013-14 Player of the Tournament. He started off with a good looking 20, but followed them with scores of five and 15. The two foreigners did not click for Mumbai. While the duo’s form is not the reason for Mumbai’s terrible start to the IPL 7 season, it certainly did not help. The Mumbai hierarchy might have realised their blunder during the IPL 7 retention and auction early in the season, but were left with the players they chose. They needed a foreign batsman at the top of the order to score runs and they turned to Lendl Simmons.

Simmons will not be at the tip of the tongue for many, if someone is asked to name devastating T20 batsmen from the West Indies. His buy was even seen as a nothing. The West Indies’ batsman and occasional wicketkeeper made his IPL debut against Chennai at Wankhede Stadium on May 10. He scored a run-a-ball 38 while opening the innings. In one innings, Simmons out-scored Hussey and was two runs shy of Dunk’s figures. Mumbai lost the match, but that was down to other reasons.

He was given another chance against Sunrisers Hyderabad on May 12. After Hyderabad posted a competitive 157 for three, the challenge was for Mumbai to get the runs against one of the best bowling attacks in the IPL this season. Simmons opened the batting and was up against the in-form Dale Steyn and Bhuvneshwar Kumar. He batted himself in without taking too many risks. He was on seven runs after facing 15 deliveries. Things didn’t look great. But he then tore into Irfan Pathan in the fifth over of the match.

Two sixes and a four then set Mumbai on course. Later, Simmons hammered a six off Amit Mishra and then a four and six off Karn Sharma. Simmons was compounding belief. He even whipped one from Steyn over short fine-leg for a four. In the process, Simmons scored a half-century. His strike-rate at the time was above 128. He was eventually dismissed for 68 off 50 deliveries. Simmons struck five fours and four sixes. When he got out, Mumbai were the favourites to win. Captain Rohit Sharma and Kieron Pollard finished off the match as Mumbai beat Hyderabad by seven wickets.

Not many expected such heroics from Simmons, but he has shown the will and grit required to play at a high level. Hussey and Dunk have far better numbers than Simmons, but for now, it is the West Indies batsman who has outshone the bigger names in the star-studded Mumbai line-up. 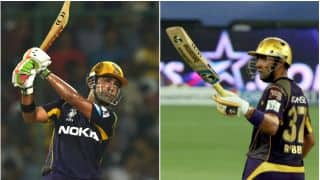