Mumbai Indians have had a terrible start to their IPL 2014 campaign.

Mumbai Indians have had a miserable start to their Indian Premier League (IPL) 2014 campaign. The defending champions have lost three matches in a row. Mumbai have to work out new strategies if they are to get to the right end of the points table. Shrikant Shankar thinks one of the strategies for Mumbai should be to go top heavy for the remainder of the IPL.

Mumbai Indians did not have the luxury of hindsight during the Indian Premier League (IPL) 2014 retentions and auctions. But in letting go the likes of Dwayne Smith, Mitchell Johnson and Glenn Maxwell, they erred big time. Now, Mumbai have lost their first three matches of IPL 7 and don’t look strong enough for the rest of the campaign. They might register a few wins here or there, but in general the defending champions look like a team short on confidence and talent.

One should not get this wrong. Mumbai have a lot of talent, more than some other teams can conjure up. But they lack in-form talent. Only two of their players look to be in form at the moment — Zaheer Khan and Lasith Malinga. While the two fast bowlers can contribute during their eight good overs, sometimes a team needs more. Michael Hussey has looked a shadow of himself from his time at Chennai Super Kings, where he finished as the leading run-scorer in IPL 2013. Mumbai either have to give a class batsman like Hussey one more chance or drop him if he continues to struggle.

Mumbai have a good option in their ranks in Australian Ben Dunk. The wicketkeeper-batsman was the 2013-14 Big Bash League Player of the Tournament. So, he did something right there. Aditya Tare seems a good option to open the innings, but consistency has been his major worry. Dunk can open with Tare if Hussey continues to fail. Mumbai employed a strategy that could have won them their third match against Chennai. They sent in Corey Anderson at No 3 and Rohit Sharma at No 4. Kieron Pollard came in at No 5. It is the apt strategy that Mumbai should use in the coming matches of the IPL.

Obviously it did not work as they lost the match, but for some time it looked to be going well. When Anderson got out, Mumbai were at 109 for three in 15.2 overs. Instead of accelerating from there, Mumbai lost wickets and their tempo. But that happens in T20 cricket. Mumbai were closer to victory in that third match when compared to the first two they played. In those, Ambati Rayudu came in at No 3. While he scored some runs, his strike-rate was quite poor for T20 cricket standards. Mumbai must go for the top heavy batting line-up as they are in need of serious changes.

In IPL 2009, Mumbai were too stubborn with their team combination and didn’t use their full arsenal. That resulted in them finishing seventh in the eight-team tournament. If one thinks about it, Mumbai have always been rigid in the foreigners they use. Maybe it is time Mumbai let go of their necessity to pick star foreign names and give others an opportunity. They could still lose matches, but at least Mumbai would have tried different combinations. 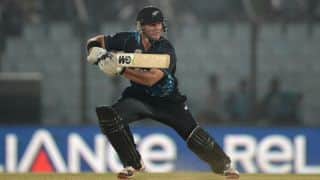