Despite plenty of experience, the pace trio of Starc, Dinda and Aaron failed to stick to basics.

Royal Challengers Bangalore (RCB) had only themselves to blame after losing their Indian Premier League (IPL) 2014 match against Rajasthan Royals (RR) on May 11. Defending a mammoth 191-run target should have been easier than they made it look despite the flat surface of the pitch. Bangalore’s death bowling was downright woeful and international bowlers were bowling these overs. Shrikant Shankar analyses Bangalore’s bowling in the last few overs.

Let us fast forward from the first innings a little. Royal Challengers Bangalore (RCB) amassed 190 for five in their 20 overs against Rajasthan Royals after Virat Kohli had elected to bat on a flat M Chinnaswamy Stadium on May 11. Yuvraj Singh starred with an amazing 38-ball 83 which included seven fours and seven sixes. AB de Villiers struck 58 off 32 deliveries with one four and five sixes. The duo shared a 132-run stand for the fourth wicket and had a run-rate of 12.18.

Rajasthan got off to a good solid start with openers Ajinkya Rahane and Karun Nair involved in a 54-run partnership. Then saw a phase of the match, where Rajasthan lost four wickets with not many runs added. Yuvraj was the wrecker-in-chief and then bowled Nair for a well-made 56 off 39 deliveries to get his fourth wicket. At the time, Rajasthan were at 106 for five in 13.3 overs. James Faulkner walked into the middle to join Australian teammate Steven Smith. They needed to get 85 runs in 39 deliveries at almost 14 runs an over.

Varun Aaron bowled the 15th over. At the time it seemed a good decision, but it didn’t turn out as the right one. Smith struck a four, a six and another four in that over. The first two deliveries were short of a length deliveries and length respectively. The third one mentioned was a low wide full-toss. This was not good bowling clearly. Yuzvendra Chahal bowled the 16th over and it was a brilliant one for Bangalore. The leg-spinner gave away only four runs. Rajasthan now needed 65 off 24 deliveries.

Mitchell Starc was handed the ball for the 17th over. He bowled a wide length delivery and Faulkner hit a four over point. Then the next delivery got the outside-edge of Faulkner’s bat and flew over Parthiv Patel for a four. A little bit of luck for Faulkner. Starc then bowled a length delivery and Faulkner launched the ball high over deep mid-wicket for a six. Starc conceded 21 runs in the over. There wasn’t one yorker bowled.

Aaron came back to bowl the 19th over. By this time, Rajasthan needed 21 off 12 deliveries. Faulkner hit a length delivery over long-on for a six. Aaron bowled a wide full-toss and Faulkner placed the ball past point for a four. Aaron then bowled a high full-toss and Faulkner pulled the ball over fine-leg for a six and Rajasthan had won the match. Again, not a single yorker was bowled.

The crowd at the stadium were stunned as much as the Bangalore players. A few overs back, it was them clinching the win, but Rajasthan won the match in Smash-and-Grab style. Smith and Faulkner scored 85 runs at a run-rate of 15.93. The last 17 deliveries resulted in 65 runs being scored. Even on a flat wicket, Bangalore’s bowlers could and should have done better. They are all international bowlers and not a single yorker was bowled. They bowled length, full-tosses, half-volleys and wide deliveries.

This was now resulted in Bangalore having a mountain to climb to qualify for the play-offs. And such woeful bowling displays will not help them achieve their target. Rajasthan on the other hand, have increased their chances of qualifying. 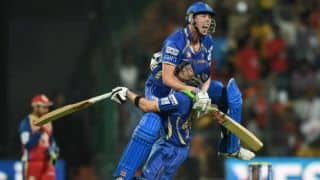 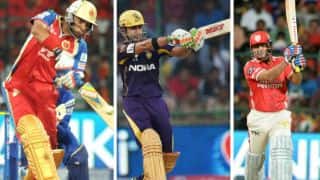