Languishing in the second half of points table, teams are catching up with confident wins.

Sunrisers Hyderabad (SRH) defied all odds to beat Rajasthan Royals (RR) in the Indian Premier League (IPL) 2014 on May 8. Hyderabad produced a joke of a batting display against a good bowling. But somehow managed to comprehensively beat Rajasthan in the end. Shrikant Shankar writes Sunrisers’ victory provides the rest an opportunity to catch up with the leaders.

How Sunrisers Hyderabad managed to beat Rajasthan Royals by a convincing margin in the Indian Premier League (IPL) 2014 on May 8 is a complete mystery. First they produced an abject batting performance to post a lowly 134 for nine in their 20 overs at Ahmedabad. The score in itself does not suggest that their batting was woeful. Many teams can be bowled out quickly. Such is the nature of T20 cricket. But some of the shots played and the lackadaisical attitude shown by Amit Mishra, did not warrant Hyderabad to post a score any higher.

They looked dead and buried as Rajasthan looked to win their fifth match on the trot. That kind of momentum is hard to stop. Last season in the IPL, Hyderabad managed to just about win matches posting low totals. Hyderabad’s strength is their bowling attack. But that is a known fact. With Dale Steyn, Bhuvneshwar Kumar, Mishra and Karn Sharma, they will always slow down the opposition. They may have the odd off-days viz. Steyn’s unraveling against AB de Villiers. But on the whole, they have a good bowling line-up.

What that 32-run win did was to open up the IPL and hand the rest an opportunity to close the gap. Kings XI Punjab and Chennai Super Kings already have 12 points each. If Rajasthan would have won, they too would have got a dozen points. This has still kept a four-point gap between Rajasthan in third position in the IPL 7 Points Table and Kolkata Knight Riders in fifth place with six points. Despite the loss, Rajasthan have that cushion and will be looking up rather than down the table. But the rest will have got a glimmer of hope to catch up with the leaders.

There is a genuine possibility that Punjab, Chennai and Rajasthan fight for the top-three positions and the remaining five teams battle it out for fourth spot in the standings. This may not give the IPL 2014 the intensity of previous seasons where most of the top-four positions were not decided until the last day of the group phase. The teams at the top may not mind, but the fans and the neutrals would always want to see things go down to the wire. Teams like Mumbai Indians and Royal Challengers Bangalore, who have genuine quality, will even think that both can get into the play-off spots displacing Rajasthan.

It is almost a given that Punjab and Chennai will finish in the play-offs. But Rajasthan don’t actually have it that easy. They are not playing at the Sawai Mansingh Stadium in Jaipur. Rajasthan are playing all their home matches at Ahmedabad. This loss shows that they can not only be beaten here, but also by a convincing margin. Last season, Rajasthan banked on their 100 per cent record in Jaipur, despite their away form being mediocre. This seasons technically, Rajasthan are not playing at home at all.

Another aspect that came out from the match was the slowly fading thought of putting the runs on the board formula. Rajasthan proved against Kolkata and then Hyderabad again on May 8 that if wickets are taken regularly in the second innings, the pressure rises increasingly on the chasing team. There is also a case that Rajasthan might have taken Hyderabad for granted and thought chasing down a 135-run target was just a formality. Either way, Hyderabad’s victory has just given the rest of the teams in IPL 2014 an opportunity to string a run of victories and increase the pressure on the ones at the top. 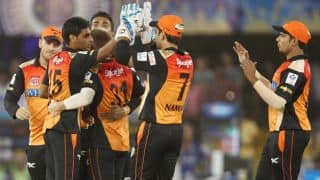