Off the field, Ajinkya Rahane appears to be soft and harmless. On it, the 26-year-old is just the opposite. When in form, even the best bowlers are at his mercy. These days, he is in some mood to score runs. The proof is his ownership of the Indian Premier League’s (IPL) 2015 Orange Cap, which sits on the head of the highest run-scorer in the league. IPL 2015 Highest run-scorer: List of best batsmen in IPL 8

Not just the IPL, Rahane has been among the runs for the last 15 months or so in Tests and ODIs. From his daring 96 against South Africa in the Boxing Day Test to a brilliant 118 against New Zealand in Wellington, Rahane regaled the masses with a match-winning 103 at Lord’s against England before setting the Melburne Cricket Ground (MCG) on fire with a gutsy 147. All these Test knocks were testimony to his class. Ajinkya Rahane enters Lord’s honours board with ton against England in 2nd Test

The technically orthodox batsman has been strutting his stuff in Twenty20 (T20) too. For Rahane, it’s more about mental adjustments than change in format. “Its challenging as a professional. You need to get used to these things continuously from Test to ODIs to T20s. For me, it’s just mental adjustments personally. You technique remains the same. It is about how you are able to adjust to conditions and formats on a mental level,” the Rajasthan Royals opener said on Saturday, the eve of their match against Delhi Daredevils at the Brabourne Stadium. Ajinkya Rahane and others who scored century in maiden Test innings at Lord’s

“Mental adjustments mean how you assess the situation, the wicket and the ground, and how you adjust quickly. Given that we have played at most grounds in India, we know the conditions. It’s only a few little things that we have to adjust to,” he added. IPL 2015 Highest wicket-taker: List of best bowlers in IPL 8

The stylish right-hander doesn’t believe in complicating things when switching formats. “I keep the game simple. The important thing is my process and the practice before the games or the series. That is what is important for me. Just focusing on the preparation,” he said. IPL 2015 Points Table & Team Standings

Off his his Test knocks, Rahane rated the Lord’s hundred as special. “All the four series has been important and crucial for me. I feel the innings that I played in England at Lord’s was special for me. Scoring a hundred and eventually winning the Test is important. It was a historical Test and a special one for me.” IPL 2015 schedule: IPL 8 match time table with venue details

Talking about his role in the Rajasthan Royals (RR) team, Rahane said he looks to play positive. “My intent is to play positive in the first six overs. If I am there for seven-eight overs, then I look to play the whole 20 overs. Apart from playing positive cricket, I try to build partnerships,” said Rahane.

Any conversation with Rahane is incomplete without the mention of his personal coach Praveen Amre, who has played a huge part in his success at the international level. “I have been talking to him consistently between games. Even during a series and in between IPL matches, I talk to him about my batting and preparations. He knows my batting inside out. He worked hard with me and the credit goes to him. He helped me with small things which helped my game,” he added.

Rahane said he gets to learn a lot from his Royals mentor Rahul Dravid. “I learn a lot on and off the field from Rahul. I regularly speak to him about my batting and how he used to prepare before a series. He just told me to keep my game simple. Cricket is a funny game. The more you keep it simple, the more you will be successful. Whenever I get an opportunity to talk to Rahul bhai, I talk to him and he tells me to focus on the process. The results always follow,” Rahane added. 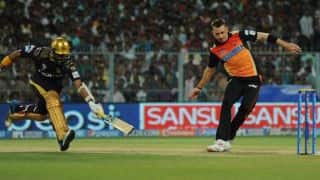